A collection of values, not just of valuables 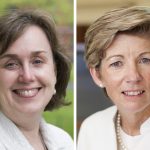 Hausammann and Margulies to retire

Carmen Beals knows that museums are more than just collections of art and artifacts. So when she set her sights on diversifying the nation’s museums, her aim was to educate communities and reinforce the culture and values within them.

“When you have representation, you basically see yourself. Then, when you get one step closer, it unfolds a history of you — a history of yourself that provides a greater understanding of the world around you,” said Beals, A.L.M. ’21, from her home in Nevada.

Beals, who received her master of liberal arts in museum studies from Harvard Extension School this month, developed a framework for diversifying museum collections as her capstone project. Working with museums for which she was already volunteering, including the Nevada State Museum and the Nevada Museum of Art, she reconceived and redesigned permanent exhibitions to make them more inclusive. But it’s not just the objects she wants to diversify.

“I’m co-chairing a diversification, equity, inclusion, and accessibility committee. We are working together to diversify roles throughout all levels of the museum,” said Beals. “That includes collections, training, staffing, accessibility, programming, and education.”

Her degree marks both a milestone and a shift in a career that began with civil engineering. With degrees from Prairie View A&M University and Amberton University (M.B.A.), Beals transitioned from engineering to information technology, where she implemented project-management systems to track infrastructure projects. Her career has taken a few calculated turns as she, her husband, and two teenage children, moved from Texas to Georgia to Hawaii and finally to Nevada.

It was the move to Hawaii that set in motion Beals’ journey toward the museum industry. There, she fell in love with the architecture of the Iolani Palace, the former home of Hawaii’s last monarch and now a museum.

Beals started researching museum studies programs and found Harvard Extension School. Her uncle, a graduate of Harvard Divinity School, encouraged her to apply, but it took her about five years to “muster up the courage.”

“The pivotal point was when I saw Dr. Lonnie Bunch, the founding director of the National Museum of African American History and Culture at the Smithsonian, [at the Denver Art Museum],” she said. “He had all of these wild and amazing stories about how he curated [the Smithsonian] collection. That really inspired me. I said to myself, ‘OK, I’m not getting any younger. I have to do this.’”

She enrolled in her first class with Katherine Burton Jones, director of the Museum Studies program, in the summer of 2018. Still feeling unsure of herself because her background was in engineering, Beals emailed Jones. Within five minutes, Beals said she got a response.

“And she said, ‘You have all you need to get ready,’” Beals recalled.

Jones said that while Beals was concerned her technical background had not prepared her for the liberal arts program, the opposite was true.

“When a student has worked in [tech] or has that type of project-management expertise, you know that they’re going to be on time with everything and ask for what they need if they need anything, so I think that helped quite a bit,” said Jones, who described Beals as an “effervescent” and conscientious student.

Beals completed her A.L.M. in a relatively short amount of time, taking advantage of three-day immersion weekends and attending the rest of her courses online. She also worked full time at her IT job and managed family responsibilities while taking courses.

The pandemic presented some challenges for the family, mostly in terms of scheduling. She adjusted, though, waking at 4:30 a.m. and doing schoolwork until 7:30, when her kids’ online classes began. She credits her husband with helping the family get through this time.

“It’s funny, you don’t realize how much you’re doing until you look back. But it was hard,” she said.

So far, Beals has worked with the Liberace Foundation for the Performing and Creative Arts, helping preserve costumes, pianos, and other ephemera. She led the curation of the first bilingual exhibit, called Latin Legends, for the Nevada State Museum, Las Vegas. Beals also spearheaded the curation of the first two travelling exhibitions on African American history in Southern Nevada, which visited schools in Clark County.

In spring 2022, the Nevada Museum of Art will unveil one of Beals’ latest projects, an exhibition on Paul R. Williams, the first African American architect west of Mississippi, affectionately named the Architect to the Stars. Williams also served as master designer of the Los Angeles International Airport and crafted other mid-century L.A. projects, like the renovation of the Beverly Hills Hotel, which features his handwriting in its iconic logo.

“People like Williams are not well-known to most Americans, but his contributions were critical to American life,” she said. “This is what gets me excited/motivated about this work.”