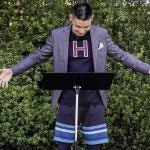 Eli Langley ’21 grew up in a family devoted to safeguarding the culture, history, and language of the Coushatta Tribe. His father, a tribal cultural adviser, and his mother, an anthropologist and tribal historian, nourished him with Native folktales and inspired him early on to take pride in his roots.

Raised in Elton, a tiny rural town in southwest Louisiana, Langley embraced his parents’ mission and his kin’s expectations as both a privilege and a responsibility, and began blazing trails from a young age. At 12, he asked his parents to send him to a boarding school to challenge himself academically. At 18, he learned Koasati, the language of his tribe, becoming its youngest speaker, and in 2016, he became the first member of the Coushatta Tribe to be admitted to Harvard.

Now, upon his graduation this month, he will become the first tribal member to use their Native language to fulfill the College’s second language requirement.

To graduate, all Harvard students must show proficiency in a language other than English. In the past, some Hawaiian students have used their native tongue to serve that purpose, said Shelly Lowe, executive director of the Harvard University Native American Program (HUNAP). “But no Native American tribal language had been used to fulfill the language requirement until Langley petitioned to use Koasati,” she said.

A government concentrator with a secondary in history, Langley is pleased he is leaving an imprint at Harvard. But he is even happier about securing the University’s recognition of his tribal language for academic credit, he said.

How are y’all doing? As for me, my name is Eli Langley.

My father’s name is Bertney Langley. My mother is Linda Langley.

Although I stay in Boston now for school.

As for me, I am Koasati. The Koasati people are called “the Coushatta Tribe of Louisiana” in English.

As for me, my father’s clan is Bobcat.

But my mother is not Koasati, and so, as for me, I have no clan.

And so, our tribal elders call me “White Bobcat.”

Now then, I like to speak Koasati because it is our language.

When I speak Koasati, my favorite word is God (lit. I like to say “He Who Sits on High”).

God has helped me learn how to speak [our language].

And so, I was so happy when Harvard recognized the Koasati language for credit.

That’s all; thank you.

“My story is a continuation of my people’s story,” said Langley. “I’m a cog in the wheel, and I stand on the shoulders of giants. I know that I’m only able to undertake these things with the strength and the knowledge of my culture.”

Historic records show that the Spanish explorer Hernando de Soto found a Coushatta community on a Tennessee River island in 1540. The tribe migrated south in a series of relocations to escape European encroachment, and a group of Coushatta people settled in southwest Louisiana in 1880.

Like many other Native American languages, Koasati is endangered: It’s spoken by about 300 of the tribe’s 860 members, and Langley’s parents have led efforts to preserve it.

Langley learned Koasati in part to reclaim his Native identity. Being of mixed heritage — his mother is an Ashkenazi Jewish woman from Boston — made him straddle two worlds and sometimes left him feeling not Native enough. He learned it as a second language during a summer immersion class, and spent countless hours practicing with elders in the community and with his father, for whom Koasati was his first language. When Langley first dreamed in Koasati, everything seemed to fall into place.

“I almost felt like the prodigal son, going back into the fold,” he said.

Learning Koasati is his proudest accomplishment, Langley said. He fell in love with the language, drawn by the intellectual challenge and the beauty of its words, made up of morphemes strung together, as is the case with most agglutinative languages. For example, in Koasati, brother translates into ittachakki, or “he who goes together with”; god is Aba Chokkooli,  or “He who sits on high”; and chair into paachokooka, or “what (one) sits on.”

“Eli worked incredibly hard to acquire Koasati, his Native language — no easy feat — and had to be patient and persistent in his efforts to gain approval from the College,” said Deloria. “Now, as a kind of capstone to his Harvard career, he’s writing a set of essays and reflections that center on the language, his family, and Coushatta people and history. Seems like the perfect way to finish off your last semester.”

Langley was inspired to write a capstone after taking “The Folklore of Emergency: Change, Continuity, and Cultural Creativity Amid Crisis” taught by Lowell Brower, lecturer on folklore and mythology. For Brower, Langley was the “living embodiment” of the class.

“It’s an immense responsibility and honor, carrying thousands of years of linguistically-encoded indigenous history and culture around in Eli’s mind,” said Brower. “Embracing his unique, world-straddling position as tradition-bearer, translator, leader, scholar, and storyteller, Eli is destined for big things — and he is well on the way to creating a work of lasting and vital importance to his tribe.”

As Commencement neared, Langley reflected on his time at Harvard, and the lessons and challenges that marked it. Achieving Harvard’s recognition of Koasati was not easy, which for Langley, follows a larger trend of not recognizing non-Western or Indigenous languages in higher education.

Initially, his petition to use it to fulfill the language requirement was held up because the wording of the policy blocked its use and because it had also never been done before. The policy required that any eligible language have both a written and spoken component, that the student demonstrated proficiency in both, and that a Harvard professor or one from a comparable university certify the satisfaction of the requirements. Most students fulfill the requirement by taking an appropriate level language class at the College. Langley could speak Koasati, but the language lacked a writing system until the tribe developed one about 15 years ago. The newness of the system and the fact that it had not been closely studied by academics created complications, and there weren’t any Harvard professors who could test his skills. Langley felt his petition was getting the runaround. He grew discouraged and took a year off, returning home to personally regroup and work on a tribal business enterprise.

In the fall of 2018, the College updated its policies, including removal of the “written component” stipulation, which opened the door for students to use American Sign Language, Ancient Greek, and other languages. The changes also allowed students who were using a language not offered at Harvard to show proficiency through an examination by a qualified instructor from another institution. Langley passed a test in Koasati conducted by Professor Jack Martin of the College of William and Mary and returned to Harvard with renewed zeal in the spring of 2019.

“I thought about all the Indians who had gone to boarding schools, and all the people who had had their cultures ripped away from them, and languages that have died already,” Langley said. “It felt like I have played a part in stemming that tide. It felt like a win for Indian country.”

After graduation, Langley plans to work in New Orleans for Teach for America and study for the LSAT. In the future, he plans to run for office.

Langley said he’s grateful for the challenges he encountered at Harvard because they strengthened his resolve to preserve his Native culture. His story, he said, is part of a larger narrative of Coushatta triumph over difficulty. In 1973, when the tribe was federally recognized after years of seeking recognition, tribal chairman Ernest Sickey summed up the feeling: “The struggle has made us stronger.”

Ultimately, Langley’s efforts to fulfill Harvard’s language requirement with Koasati are a testament to his dedication to the Koasati language and Coushatta culture, and a tribute to what he saw as his responsibility to the College.

“In the end, my greatest show of loyalty to Harvard is that I felt it was worth changing,” said Langley. “If there is one thing I can impart to anybody, it’s that it’s worth fighting to change things. People who come after you may never know your name, but they can benefit from the work that you do. It is worth it.”