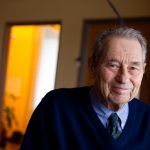 As a master’s student studying biology at the Tata Institute of Fundamental Research in Mumbai, India, Sneha Dutta came across research in one of her classes that fascinated her. Authored by Harvard T.H. Chan School of Public Health’s William Mair, it demonstrated that regulating a metabolic pathway in the brain could change the way we age. For a whole host of diseases, the biggest risk factor was simply getting older.

“There’s a plethora of noncommunicable diseases such as cancer, diabetes, and neurodegeneration that plague our society, where the primary risk factor is old age,” Dutta says. “So you can really think about aging as a sort of disease.”

Of course, if aging is a disease, that implies there might also be a cure. “If you could target the underlying processes that go wrong during aging, you’d be able to treat not just one, but multiple diseases at the same time,” she adds.

Intrigued by the idea, Dutta applied to Harvard Chan School and was accepted into Mair’s lab to study how cellular pathways go haywire as people age. Dutta has focused on the phenomenon of RNA splicing, the process by which cells snip fragments of RNA that ultimately encode functional proteins. As people get older, this process increasingly goes awry and can result in myriad health problems. But if researchers can figure out ways to keep the RNA splicing process orderly and optimized, Dutta argues, it would be possible to counter some of the harmful effects of old age and reduce the risk of disease. “In targeting these anti-aging pathways, the goal isn’t to make people live longer,” she explains. “The goal is for them to live healthier and improve the quality of life.”

Dutta first became interested in the biological basis of health at a young age. Growing up in Kolkata, India, she witnessed her father suffer cardiac arrest when she was just 10. “He was really young, and had no other health complications, but suddenly one fine day, he was commuting to work and had a heart attack.”

Doctors performed bypass surgery and gave him a host of different medicines, but unfortunately side effects from some of the medications gave him diabetes. “They were doing the best they could to help him, but there are so many unknowns about these underlying networks in the body,” she says.

Determined to help those suffering from disease like her father, she studied microbiology at St. Xavier’s College in Kolkata before being accepted into the master’s program at Tata Institute of Fundamental Research, a prestigious program emphasizing hands-on lab research. There she studied malaria, a pervasive problem in India, researching a protein that could be a candidate for a long-sought vaccine. It was one of the first times she grasped the extent to which bench science could influence public health and she was hooked. “I could clearly see how research might directly impact millions of people in countries where malaria is so rampant, and where finding preventive measures could be so helpful,” she says.

Her current research at Harvard Chan focuses on manipulating RNA splicing pathways in C. elegans, a type of roundworm that’s commonly used in lab research. The Mair lab studies dietary restriction and has shown that reducing caloric intake without malnourishing the worms can make them live longer. What’s not perfectly understood — and is a central focus of the lab — are the downstream effects that influence the benefits of dietary restriction.

Building off research by senior research fellow Caroline Heintz, Dutta has shown that those longer-living worms require certain proteins in the cells called splicing factors. When the worms are manipulated to suppress those proteins early in their lifespan, Dutta has found, the worms live shorter lives. “If you don’t have these splicing factors, then dietary restriction and other longevity interventions won’t allow you to live longer,” she concludes. Suppressing them later, however, has no effect.

Mair, associate professor of molecular metabolism, touts Dutta’s work and notes that it could help inform the development of novel treatments in the future. “Sneha’s work shows how the activity of RNA splicing factors early in life in C. elegans determines later responses to pro-longevity interventions,” Mair says. “If this finding holds true in humans, it will be key to translating basic science to usable therapeutics, a first step toward precision medicine approaches for aging.”

As she prepares to graduate this summer with her Ph.D. from Harvard Graduate School of Arts and Sciences, Dutta is increasingly looking to use her research skills to directly impact patients around the world. She has already accepted a position as a life-sciences consultant with a Boston-based firm to help biotech and pharma companies better strategize on how to bring treatments to market. Eventually, she hopes she can use the experience she gains to overcome logistical issues that sometimes limit access to life-saving treatments in developing countries such as India.

“I’d like to be in a position where I can solve these problems and overcome the roadblocks that prevent companies from investing in developing countries so that hopefully everyone will benefit from these treatments,” she says.