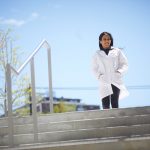 Pioneering NBA star reminds seniors that life is about the journey, not the destination

“You will always be more than your accomplishments,” he said.

Unexpected advice from someone who has already achieved so much since graduating from Harvard College in 2010, having broken cultural barriers to become a pioneering NBA sensation as well as an activist and philanthropist. But Lin’s fairy-tale rise from College hoops player to global icon as the first American of Chinese or Taiwanese descent to be an NBA starter wasn’t what it appeared, he confessed in his virtual address for Class Day, an annual College event honoring graduating seniors.

“The one thing I regret most about ‘Linsanity’ was that I didn’t slow down and appreciate the moment I was in while I was in it. I had finally accomplished my dreams of becoming a starting NBA basketball player, and all I could think about was the next game,” he said.

While fans were going crazy over his “sweet moves” on the court, Lin could barely eat or sleep.

“I had so much anxiety I was stuck in bed, shaking,” he said. “That’s when I learned that if you can’t be content in a journey, you will not be content at your destination. There will always be a new goal.”

Lin was a standout point guard for the Harvard Crimson, an Ivy League all-star, and team captain his senior year. He set his sights on the NBA, but pro teams infrequently draft from the Ivy League. So when he got an invitation in May 2010 to work out for the Los Angeles Lakers, an audition of sorts, Lin accepted, missing his own Commencement. Instead, his Leverett housemates carried a giant cardboard photo of him into Tercentenary Theatre.

Lin impressed several teams that summer, joining the Golden State Warriors in the fall after College. Let go the following season, he landed at the perennially underperforming New York Knicks in December 2011, scrapping for the last spot on the 12-person roster. Within a month, Lin went on a scoring tear that set the hoops world on fire and turned around the Knicks’ losing season. Dazzled by the newcomer’s moves, and excited by Lin’s stereotype-defying play and visibility, basketball fans dubbed his electrifying 26-game hot streak, “Linsanity.”

At a time when Asian Americans face a resurgence in violent attacks, hostility, and discrimination in the U.S., Lin spoke candidly about how his attitude toward race and his identity as an Asian American celebrity has evolved over the years.

“After being at the top of the world with Linsanity, I can tell you that success without community is absolutely meaningless. Getting somewhere without being able to bring someone up with you isn’t worth it.”
— Jeremy Lin

Growing up in the Bay Area, Lin said he “never felt abnormal” as the son of immigrants from Taipei. But as he started having success in a sport dominated by Black and white athletes who weren’t Harvard graduates, he spoke of feeling uncomfortable with the attention paid to his ethnicity, even when the attention was mostly positive. Every interviewer asked about his racial identity, every Asian American organization wanted him to be their spokesperson, and every game on the road in a new city “was suddenly Asian Heritage Night,” he said.

“I couldn’t understand why every Asian person looked at me like all their hopes and dreams were on my shoulders, while every white person looked at me like, ‘Wow, Yao Ming is way shorter than I thought,’” joked Lin, who is 6 feet, 3 inches, about being mistaken for the retired NBA All-Star center from China, who is 7 feet, 6 inches. “It was a lot to carry, and I ran away from it.”

Annoyed that he was becoming known for being “The Asian Basketball Player” rather than for his individual talent, “now I’ve come to understand that my identity is part of my superpower. What makes me different is not a weakness, but potentially my greatest strength. Even though I will be more than an Asian basketball player, who I am and where I come from is woven into everything that I do,” Lin said.

Insatiable ambition and a desire to prove the haters and doubters wrong were strong motivators during his decade in the NBA, Lin said. “It will work for a while,” but eventually that fire cools and won’t be enough to overcome every hurdle in life. He cautioned the students not to let their competitive drives be their north star or to measure self-worth by income or prestige stats.

Though his NBA comeback didn’t pan out this year, and at age 32 time is not on his side, Lin has not announced his retirement. But even if he’s only ever remembered for his crazy moment of fame, he said, “That’s OK.” Figuring out who he was, and why he did what he did, was “a journey” that came down to identity and faith.

“After being at the top of the world with Linsanity, I can tell you that success without community is absolutely meaningless. Getting somewhere without being able to bring someone up with you isn’t worth it.”

When he looks back at his time as a pro athlete, Lin said what he will be most fulfilled by is knowing whether he inspired people and whether what he said and did changed things for the next generation.

“Will someone after me have fewer barriers chasing their dreams because of what I did both on and off the court?” he said.

As a “first,” Lin urged students who will one day accomplish great things and be “barrier breakers” to embrace that mantle even if it can be a lonely road.

As students get bombarded after graduation with questions asking what they’re going to do next, Lin said, “The better question to ask yourself is, ‘Who are you going to be? Why do you do what you do? And who are you going to bring up with you along the way?’”

Danoff Dean of Harvard College Rakesh Khurana, Ph.D. ’98, acknowledged the enormous academic and social challenges that students have had to endure since the pandemic abruptly shuttered Harvard’s residential campus in March 2020. COVID-19 brought endless uncertainties, sudden limitations, and created new difficulties for everyone. The pandemic often made people feel as if they were walking into a strong headwind and making little progress, he said.

“Life may have seemed like it was pushing against you at every turn. But through it all, you kept moving forward, with grace and determination. You used the ways of thinking that Harvard most values — evidence, reason, Veritas — to make your decisions about moving forward, even when the world around you seemed to be going the other way,” Khurana said.

Khurana said he was impressed by students’ perseverance through the public health crisis and praised the creativity they showed in inventing new ways to keep the essential social experience of College life alive, along with their leadership in standing up and fighting racial injustice and challenging systemic inequalities, even those they may have benefited from.

“After watching you this year, I have seen these strengths on display every day and believe that you are well prepared to face the uncertain world that awaits us.”

Olivia Summerville Farrar, an English concentrator and rower on Harvard women’s crew team, encouraged her fellow seniors to be the authors of their own life stories, while Marie Konopacki, an art, film and visual studies concentrator, recalled some unforgettable times — and a few forgettable ones — that the Class of 2021 experienced during a waggish Ivy oration.

The Richard Glover Ames and Henry Russell Ames Award was presented to Nhu Dang and Thomas Bassett. A premed student originally from Vietnam, Dang was honored for her volunteer work helping vulnerable populations get access to health screenings and services. Bassett, a platoon leader who served three overseas combat deployments with the 75th Ranger Regiment before coming to Harvard, was recognized for his active role helping and encouraging other veterans attend Harvard. The Ames Award is given each year to two graduating seniors whose contributions to the Harvard or surrounding communities are meaningful but who haven’t received the recognition they deserve.

Class Day is the annual celebration exclusively for graduating Harvard College students that precedes the University’s formal Commencement Exercises. Since 1968, the seniors have invited a special guest to address the class, often chosen from the worlds of the arts, politics, business, or philanthropy, who sometimes also happen to be College alumni. Past speakers include Nigerian author Chimamanda Ngozi Adichie (2018), President Joseph R. Biden Jr. (2017), who was then U.S. vice president, comedic actress Amy Poehler (2011), and Civil Rights icon Coretta Scott King (1968), who spoke just weeks after her husband, Martin Luther King Jr., was assassinated.