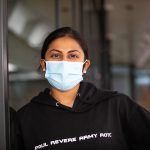 Diversity, equity, inclusion, and belonging are at the core of Samantha Fletcher’s curriculum

Samantha Fletcher is always moving, pouring her energy into new activities, and at the heart of each role — educator, student-leader, podcaster, mother — is her commitment to equity.

Fletcher’s journey into equity work was a roundabout one, starting when she was a journalist in Augusta, Georgia. Local education was part of her “beat,” and she soon found herself inspired to make a career switch. As a preschool teacher at an independent school in Washington, D.C., she noticed her students asking “innocent” questions about each other’s skin color and differences. These questions were common, but they weren’t regularly discussed or answered in the curriculum.

“I thought, couldn’t I help change this?” recalls Fletcher.

At the time, Fletcher was pursuing her first master’s degree from the University of Maryland in curriculum and instruction, with a focus on minority and urban education. For her master’s thesis, she made a plan to address diversity in her own classroom. By the end of the project, she had redesigned her curriculum to intentionally address race and identity with her students from the beginning of the year. The new curriculum, she says, was designed to make “underrepresented students feel included” and “everybody in the classroom feel valued.”

Soon after, Fletcher was training as a racial dialogue facilitator and began to lead equity workshops for her school’s families. The workshops were so popular that she started independently offering them across the D.C. area — and eventually nationally — while teaching full time. Later, with two other teachers at her school, Fletcher designed and implemented a case-based professional development workshop to help educators develop racial literacy. She felt called to equity work, she says; whenever she saw an opportunity to teach others about DEIB (diversity, equity, inclusion, and belonging), she took it.

“The experience of meeting these people and doing these workshops made it apparent how much more work needed to be done, which made me want to help more people,” she says. “I wanted to eliminate or minimize harm.”

At the same time, Fletcher found herself missing the work in media production she had done as a journalist. She figured out a way to combine her passions for equity, education, and media when she started Harvard Graduate School of Education’s Technology, Innovation, and Education Program this past fall.

“We’re all going to school, we’re all getting an education, but what’s happening? We aren’t getting the same messages about race.”
— Samantha Fletcher, Ed.M. ’21

Fletcher was hesitant to leave her husband, Kenyatta, and two children to move to Cambridge for a year, but her husband encouraged her to apply, committing himself to staying in D.C. with their children. (“I married the best person ever,” she says.) Then COVID-19 hit, and Fletcher found herself preparing for a year of online learning, rather than a move. “Boston” became her office — a portion of her basement that included a spare bedroom, nicknamed “the dorm,” where her kids would soon find themselves falling asleep while they waited for their mom to finish her own homework.

Despite the challenges of remote learning, Fletcher has thrived at HGSE. Alongside her classes, she became an equity and inclusion fellow. As a Saul Zaentz Fellow, she is working with Scholastic Magazine helping with equity-centered professional development in its preschool division. She is working with two classmates to develop a story-based app, called “SAL” — which stands for “Sharing Anecdotes and Learning” — to help teachers fight racism. And, she is producing and hosting the “Daily Border Crossings” podcast, about what it means to cross metaphorical borders in everyday life. She has even managed to plan Zoom birthday parties for her two kids.

Perhaps her biggest achievement this year, though, is TIE-DIE, a student organization she founded to help technology, innovation, and education (TIE) students engage in diversity, inclusion, and equity (DIE) work (hence the name). Fletcher was eager to see her peers engage in equity work that they could bring with them into their post-Harvard positions in education media and technology. Sadly, Fletcher realized, a lot of her peers saw equity “as this thing that doesn’t include them,” whether because they were unfamiliar with the racial context of the U.S. or because they perceived themselves as not having a race. She felt like the equity conversations unfolding in her classes weren’t reaching everybody in the same way.

“We’re all going to school, we’re all getting an education, but what’s happening? We aren’t getting the same messages about race,” says Fletcher. “This is happening in the majority of school settings, from childhood to adulthood.”

She launched TIE-DIE in February to address this dynamic. The program began with an event about equality in edtech jobs. Fletcher received positive feedback from participants, but she wanted to see more growth, so she used her spring break to plan a few more events, including one to address underrepresented writers of color in children’s media. Even as the year draws to a close, she’s thinking of ways to revamp the program: starting “TIE-DIE Talks,” where TIE professors will lead equity-focused education and technology discussions in April and May; facilitating affinity group meetups, and creating videos to entice more TIE members to attend. Through TIE-DIE, Fletcher hopes to bring an equity-forward mindset to the forefront of edtech. She recognizes that many of her peers will be leaders in the field and wants them, from an equity standpoint, to be knowledgeable, compassionate, and fair.

“I want people to get that who I am, I take wherever I go,” says Fletcher. “That’s a part of what equity is. Whatever your race, gender, class, accent, language, dialect, religion — those things go with you everywhere. People need to be considerate of these identities when working with you, talking to you, and interacting with you. What does it mean to be a woman or a Black person or an Asian person in a space? How are people viewing you? And how are you viewing others?”

When she graduates this May, Fletcher will leave campus with much more than a degree. She is leaving with new interests, like a new commitment to the intersection of international education and equity.

Fletcher says she is sad to leave Harvard, but she’s excited about the future. She’ll be keeping some of her roles after graduation (her podcast, her racial dialogue workshops, her identity as wife and mother), and she’ll be saying goodbye to others. Right now, she’s toying with the idea of writing a book, or maybe diving more deeply into the world of edtech. When asked where she finds the time and energy to juggle so many passions and ideas, Fletcher credits her family and her faith. “I give all that credit to God for giving me ideas and passion, and then providing energy and opportunities,” she explains.

No matter where she goes, Fletcher is sure to bring her commitment to equity. Referencing HGSE’s motto, “Learn to Change the World,” Fletcher says, “I’ve always wanted to do my part in changing the world. I’m involved in all these things here, learning to do just that — learning in order to change the world for the better. When I graduate, that’s my goal and my plan.”