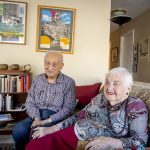 A sense of humor, giving space, trying to listen: Advice from 73 years of marriage

By May Harvard Square will surely look terrific, having undergone major transformations to the anchor buildings in its center island and surrounded by many new or newly reopened restaurants and stores. When members of the Class of 2025 come to the Yard in the fall, the Harvard Square they come to know will be a bright and shiny version of the last one, and the one before that, and the one before that.

For frequenters, going back through the years, the Square has always been a place of firsts, of coming-of-age moments that stay in their memories. Maybe it was the first job in the crammed poster department at The Coop. Or having their ears or nose pierced in The Garage. Or buying that first beer at The Boathouse, The Wursthaus, or Daedalus — or even, in the way-back machine, the Oxford Ale House. Were you a bystander or perhaps a participant in a performance in The Pit? Did you crane your neck to glimpse Bill Clinton when his impromptu visit shut down the Square?

Did you dress like the rock star Prince to attend “The Rocky Horror Picture Show” at midnight? Sit at the counter in the Tasty or eat the Tom Brady burger at Bartley’s? Have you bought poetry at Grolier’s? Watched the Sox at Charlie’s? Did ever go to lunch with your officemates at Casablanca? Delight in a movie at the Harvard Square Theatre or the Brattle, or an acoustic show at Club Passim? Find a treasured book in the Square? Or bought vinyl at Newbury Comics?

Often these moments are still vivid, formed at a time of wonderment in this place chock-filled with discoveries. We stand back and watch as the Square has shed its skin yet again, awaiting the wanderlust of new visitors and first-years to its beckoning streets.

Bundled-up pedestrians walk past an artist’s rendering of the Regency Centers Project in Harvard Square. It encompasses the work at the Abbott Building at 1‒7 JFK St., the Corcoran Building at 9‒11 JFK St., and 18 Brattle. The three buildings are going to feature retail, offices, and restaurants and recreations. Four other ongoing or future construction projects are in place, and several are recently completed, said Denise Jillson, executive director of the Harvard Square Business Association.
“Fridge in the Square” on Church Street is a mutual-aid organization driven by heightened levels of food insecurity during the COVID-19 pandemic.