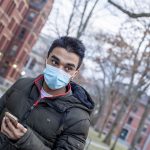 Basically everyone who’s lived at Pfoho over the past 14 years is a Super Mario fan.

Here we’re not referring to the old-school video-arcade game but to Mario Leon, who picked up the nickname as a sign of affection over his lengthy tenure as the warm, helpful building manager at Pforzheimer House.

Since the pandemic began, Leon has adjusted to COVID-19 life on campus, running the House in accordance with strict health protocols and with only a fraction of the usual complement of students. But he knows it just hasn’t felt the same for anyone, and started wondering whether he could find a way to fix it, even a bit.

“It’s been so difficult to connect and be enthusiastic virtually,” said Leon, who has felt special empathy for first-years with limited opportunities to meet people in person and for sophomores who were not invited to campus for the current academic year.

So Leon conceived a challenge for himself: “50 Days of Pfoho Super Mario.” He started an Instagram account, @supermario_pfoho, dug out his wardrobe of accumulated Pfoho garb, and started sporting it in and around the House.

He takes requests from students, and has visited the Quad Grille, Wolbach Hall, and the Spfa. On Day 22, he posted from the gym. On Day 13, he sported his first Pfoho hoodie (2007), backward baseball hat, and sunglasses outside the House.

“These look like screenshots of a music video,” commented one student.

“GOAT status!!! I need to stop by one day, and we can kick around for a bit,” wrote another.

Kiana Ziadkhanpour ’22, who serves on Pfoho’s House Committee and helps amplify Leon’s posts on other accounts and platforms, said, “Feedback has been great.”

“People have enjoyed getting a glimpse at normal House life — sometimes we provide a little blurb about the location Mario’s in, or some context about a specific shirt he’s wearing which has helped bridge gaps in distance, time, and space for Pfoho residents, new and old,” she said.

Leon envisioned the 50 days, which began just before Housing Day, as a realistic goal given his extensive Pfoho wardrobe — “I haven’t even gotten to my IM shirts yet,” he said — and even comes to campus on his days off to take photos. His family, the custodial crew chief, and House administrator have all served as photographers, though Leon doesn’t see himself as a social media influencer.

“Getting to build relationships with students for the three years they live here — that’s the satisfying thing,” he said. “We feel as staff the need to work a little harder to get students to come to the Quad. But once they come, they become really attached to the House.”

And while Leon knows social media can’t replace in-person connections, his interactions with students and alumni have shown how connected many still want to be.

“I’ve done the math. From 14 years here, I have met thousands of people in Pfoho,” he said. “I’ve gotten a good number of responses. They still feel attached, and I try and get them involved, asking where do they want to see me next. My creativity has come out.”