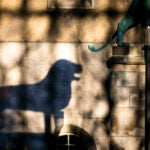 Following the same directions, 14 pairs of students end up in 14 places

Take away modern navigation tools — a smartphone or even a compass — and getting from point A to B can be tricky. Just ask the 28 students in a course on predictive systems, who were tasked with doing just that in a place many knew intimately: Harvard Yard.

The assignment in Alyssa Goodman’s Gen Ed class sounded simple enough, with steps such as “head 211 feet at nine degrees east of south,” but carrying them out was challenging on several levels.

“We were supposed to just use our intuition,” said Neil Khurana ’22. “We’re learning about certain navigation techniques that they used before all this modern technology. The point is to try to be navigators ourselves and see if we can acquaint ourselves with an area without these tools just [by] making inferences on where we’re going based off limited information.”

Khurana, who’s living at Adams House, was paired with first-year student Zev Minsky-Primus, who’s studying virtually from New York and joined Khurana over video chat. The two debated which way was west, and laughed when they started in one direction only to realize they were turned around. Once they settled on what they thought was the right path, Khurana took a picture of it and jotted down their navigation coordinates for later submission.

The Harvard Yard navigation adventure was set up by Goodman, the Robert Wheeler Willson Professor of Applied Astronomy in the Faculty of Arts and Sciences and co-director for science at the Harvard Radcliffe Institute. Her course traces the history of prediction, from Ancient Mesopotamians searching sheep entrails for clues about the future to modern scientists simulating Earth’s future climate.

Navigation is critical to predictions, specifically in calculating space over time. Errors (or uncertainty) in navigation can have life-and-death consequences — though not in Harvard Yard. Good thing, too: The students ended up all over it, though they were following the same directions. In the follow-up class, Goodman shed more light on the statistics of navigation and let the students know who came closest to the actual locations. The winning pair got a historical map of Harvard.

“The goal of the full exercise is to demonstrate why and how uncertainty around navigational predictions was and still is so important,” Goodman said.  “When asked to report an estimated uncertainty in their final position, nearly all students grossly underestimated how far off their final position was likely to be. When they finally see everyone’s position, with estimated uncertainties, on a map and realize how common overconfidence is, I think they get a very good idea of how and why estimates of a prediction’s uncertainty can be just as important as the prediction itself.”

Students described the task as fun and challenging, and a good reason to get outdoors at a time most academic work is happening online.

“This is the only class activity which has gotten me out,” Khurana said. “It’s really cool. It reminds me of pre-COVID times a little bit.”