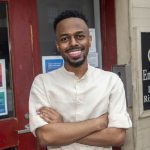 Trying new things has been a driving force for Gayatri Balasubramanian ’21 throughout her four years at Harvard.

Growing up in central Indiana, Balasubramanian focused on academics and music, but when she came to Harvard, she knew she wanted to experience new challenges. The first new venture she embarked upon was walking on the varsity sailing team.

“My mom mentioned in passing that it would be cool if I learned how to sail. I surprised her by taking her up on that seriously,” she said.

After receiving a welcome email from the varsity team’s first-year captains, Balasubramanian realized that she had to set new goals. She recalled going to the gym every day the summer before freshman year, lifting dumbbells.

“I was trying to prepare as best as I could,” she said.

As if learning the ropes of a new sport wasn’t enough of a challenge for the first-year College student, Balasubramanian also joined Army ROTC after arriving on campus.

“I would do both physical training and lift workouts in the morning, literally changing and running from one to the other,” she said. “I knew that if I kept trying and working hard, I could excel in both.”

Sailing may have been a newfound passion, but Balasubramanian’s interest in the Army was kindled in high school. She held back from the school’s Junior ROTC program because it did not seem to be the right fit. But, when she joined Harvard’s ROTC, she was pleasantly surprised to meet cadets from diverse backgrounds.

“The opportunity to study computer science and government —  at Harvard — and get on track to become an Army Officer was an opportunity I could not pass up,” she said.

While her initial plan was to become an officer in the Army’s new cyber branch, Balasubramanian chose the engineer branch instead.

“If I was going active duty in the Army, I wanted to learn something that I wouldn’t be able to learn anywhere else,” she said, “The Army teaches values and leadership.”

Balasubramanian’s desire to help people is what drove her to join ROTC in the first place. From a young age, her mother instilled in her principles of Hinduism and its emphasis on charity and service.

“My mom stressed the importance of learning and seeking truth, especially through studying the sciences, and she taught me the most fulfilling professions are those that help humanity and all creatures,” she recalled.

Those values played a major role in the path she has followed as a computer science concentrator at the John A. Paulson School of Engineering and Applied Sciences (SEAS).

Balasubramanian has been interested in STEM at the intersection of service and teaching for as long as she can remember, even founding a club in high school that led educational activities at public elementary and middle schools. She and her peers used small robots to teach younger students basics of computer science and spark their interest in the field.

As a first-year, Balasubramanian served a counselor for Phillips Brooks House Association Summer Urban Program, an enrichment program for low-income youth, despite overcoming an injury in the middle of the program. The next year, she interned at a civic tech nonprofit through a Director’s Internship from the Harvard Kennedy School’s Institute of Politics.

She wrote a script that scanned individual web pages on government domains to count the sensitive terms on those pages, like the use of “gender” versus “sex” or “illegal alien” versus “immigrant.” The program would then compare current web pages to past snapshots in the “Wayback Machine” internet archive to see how the number of terms had changed across presidential administrations.

“If you look closely on government websites, you can see that sometimes they change terminology before they make policy changes,” she said.

She continued exploring technology’s role in the public sector through a Civic Digital Fellowship, created by a Harvard student-founded organization Coding It Forward. At the U.S. Census Bureau, she made Equal Employment Opportunity (EEO) data from American Community Survey more accessible for the lawyers, policymakers, and other public officials who rely on it to inform important decisions.

Her work resulted in an innovative custom tool that rapidly generates EEO tables.

“It was my most valuable experience because I learned so much, but I also knew that every minute I spent was creating a tool that would make a difference,” Balasubramanian said.

As she was building skills for her career in tech and service, Balasubramanian also felt strongly about paying-it-forward and helping her fellow students. She serves as a co-captain of the Peer Concentration Advisors for Computer Science and has been a teaching fellow for five undergraduate SEAS courses.

“I had many challenges in my academic journey and, often, I didn’t know who to go to for mentorship,” she said. “I have been so driven to help other students avoid some of those tough experiences I had. I want to be a resource and someone they can look up to and go to if they need help.”

Balasubramanian looks forward to continuing to help people during the next chapter of her life. After graduation, she will attend the Army’s basic officer leadership course.

“I’m praying for the best. I want to be a strong leader,” she said. “I believe that I can make a difference. I have the right mix of discipline, empathy, and desire to be a good leader for my soldiers.”

Looking beyond her Army service, Balasubramanian wants to pursue a career in defense.

“My computer science degree and liberal arts background give me the technical understanding and interpersonal skills to tackle 21st century defense problems,” she said.

Balasubramanian knows the skills she honed at SEAS will be put to good use in the service of others.