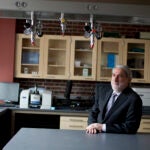 A new analysis of fossilized dental plaque offers fresh insights into long-distance trading during the Bronze Age and the surprising foods on the menu in two ancient Mediterranean cities more than 3,000 years ago.

Exotic Asian spices and foods such as turmeric, soybeans, and bananas had already reached the Levantine coast of the eastern Mediterranean, in present-day Israel, as early as 3,500 years ago — more than a millennium earlier than previously thought. Evidence of these foods in the Mediterranean provides the earliest direct evidence of them outside of their regions of origin in Asia and shows that from the Middle Bronze to early Iron Age, around 3,000 to 3,600 years ago, long-distance trade routes already connected these distant societies.

The work is described in PNAS by a team of international scientists, including Harvard Professor Christina Warinner, Ph.D. ’08.

“The Mediterranean is a really early center of complex society and so is South Asia,” said Warinner, assistant professor of anthropology in the Faculty of Arts and Sciences and the Sally Starling Seaver Assistant Professor at the Harvard Radcliffe Institute. “These two regions are well-linked by the late first millennium B.C., but the origins of that connection haven’t been very clear, nor how far back in time it really goes.”

To get at the answer, the scientists turned to a rich data source of archeological information: ancient human teeth.

Using cutting-edge techniques in paleoproteomics developed in Warinner’s lab, the group looked at the mouths of 16 individuals who died more than 3,000 years ago to analyze the food remnants preserved in their hardened plaque, also known as dental calculus.

“Your dental plaque records a lot of things about you,” Warinner said. “It has your DNA. It says a lot about your immune system. But it also contains traces of foods debris … It’s just this sort of kitchen sink of information about your life.”

Getting at this information using conventional techniques is often challenging because foods and oils often don’t leave detectable traces, making them archaeologically invisible.

Palaeoproteomics makes the dietary proteins in the remnants of food and plants visible.

“Anyone who does not practice good dental hygiene will still be telling us archaeologists what they have been eating thousands of years from now.”
— Philipp Stockhammer

“What we essentially do is we give the ancient individual a very good dental cleaning,” Warinner said. “We clean the calculus off, and we then [gently] dissolve the calcium minerals to release the dietary proteins, which are then purified and analyzed using a mass spectrometer so they can be identified.”

“This enables us to find traces of what a person ate,” said co-senior author Philipp Stockhammer, an archaeologist at Ludwig Maximilian University of Munich and deputy director of the Max Planck-Harvard Research Center for the Archaeoscience of the Ancient Mediterranean, in a statement accompanying the release of the paper. “Anyone who does not practice good dental hygiene will still be telling us archaeologists what they have been eating thousands of years from now.”

The scientists scraped the teeth of skeletons from two ancient sites in the Southern Levant. One was Megiddo, an important Bronze Age city-state, and the other was Tel Erani, a nearby settlement prominent during the Iron Age.

They first uncovered various expected staple foods, such as wheat, sesame seeds, and dates from samples at the Megiddo site. Traces of sesame proteins were also detected in the calculus of samples from Tel Erani, showing the food had become a staple in the Levant between 2000 and 1000 B.C.

Then came the unexpected. One male skeleton buried in a tomb that appeared to be that of an individual of some wealth in Megiddo showed traces of both turmeric, a bright orange South Asian spice used for flavoring and medicine, and soybeans, which had been used to produce oil in East Asia for thousands of years.

“This particular man may have actually been a long-distance trader himself, and we can’t exclude the possibility that he may have traveled to South Asia, where he consumed these foods, and then later returned to the Levant, where he died and was buried,” Warinner said. “Nevertheless it shows the greater interconnectivity of these major world regions at this time.”

In a sample from the Tel Erani site, the team found traces of a banana protein in the dental calculus of a middle-aged man who appeared not to belong to any elite group. The finding provides unexpected information on the enigmatic history of bananas, which originated in Southeast Asia around 5000 or 4000 B.C. and made their way to West Africa about 4,000 years later. Little is known about their intervening trade or use.

Historically, archaeological evidence of bananas is notoriously difficult to find since they are seedless and the soft fruit decomposes quickly. Palaeoproteomics helped the researchers detect the protein that triggers the banana to ripen.

The researchers theorize the man may have snacked on dried banana chips, because in this form they can be traded over long distances.

The scientists, who also included researchers from Israel and Spain, believe these types of discoveries are only the start of what can be done with the new technique.

“What sorts of new discoveries are we going to make?” Warinner said. “We’re just beginning to apply it archaeologically. It’s like having new eyes to see.”

This work was funded by the European Research Council.