‘In mens sana, in corpore sano’ — even in fourth grade 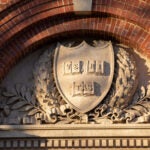 Even in an average year, often the most important elementary school lessons don’t come in the classroom. In late January, four Harvard undergrads put that theory into practice when they joined fourth-graders at Gardner Pilot Academy in Allston for a reading session that highlighted the importance of reading and staying active.

Dominique Petrie ’22, Lindsay Poulos ’23, Achele Agada ’23, and Nathan Wu ’23 took turns reading short stories from “No Voice Too Small,” Lindsay Metcalf’s book about young people around the U.S. who are stepping up and changing their communities for the better. Of the book’s 14 vignettes, the undergraduates chose “Jasilyn Charger: Water Protector,” and “Noah Barnes: Marching for a Cure.”

“I liked both [stories] a lot,” said one fourth-grader, who shared his thoughts with the class. “Because they’re about two kids that fight for rights, not just for themselves, but for other kids and people that they know, and also people that they don’t know.”

Between stories the student-athletes made sure that the class exercised more than their minds. Petrie, a member of the women’s hockey team, led the group through a round of stretches, squats, and jumping jacks.

“I know that sitting down and doing school all day can be a little bit tiring and exhausting, so just [a little exercise] every one or two hours is an awesome way just to get your energy levels up,” Petrie said.

“I don’t know about you, but I’m ready to read some more poems and stories. What about you guys?” she asked the class, whose smiling, nodding faces filled the Zoom boxes.

Wu, a member of the men’s water polo team, spoke later about the importance of athletics outside the classroom.

“Everything I’ve learned from athletics has translated into the classroom and into social interactions,” he said. “Whether I’m trying to reach out to a lab personal investigator when I want to do research, or I’m talking to a professor — it’s all that respect, working together, communication, and common courtesy that we learn.”

“It makes a huge difference in the person that they turn out to be,” he continued. “Kids love to play, so if they can balance that with schoolwork, that can help them in the academic scene and extracurriculars — it all goes hand in hand.”

The collaboration between Harvard and Gardner Pilot Academy dates back more than a decade. In March 2020, when COVID-19 pushed both the University and the Academy online, activities like the reading session became one of the best ways for students to stay connected.

“Having these scholars hop into these Zooms — or in real times hop into the classroom — it’s really inspiring for the students to see that that can be them,” said Ariana Fusco, partnerships manager at Gardner Pilot. “That they have this experience, and with Harvard being so close to GPA, it’s a great role model for students to see and to ask questions.

“We want these students to excel — not just now, but their entire life. We believe that giving them these resources now is going to provide them with a bright future.”

The partnership supports the Academy’s mission to not to only teach students in the classroom, but also to support them outside it with social, emotional, and enrichment programs. “It provides an avenue for these students — especially students who are having a hard time at home, having a hard time with a pandemic — that shows them that could be them on the screen. They can go to Harvard. They can do that,” said Fusco. “GPA is just here to help them navigate and bring these partnerships and bring these resources to students.”

The Harvard students closed the session by taking questions from the fourth-graders, who asked what economics was (business with more math and more theory), how many sports there are at Harvard (42), and how old you have to be to go to college (around 18, but many people go when they are older).

The final question was a group favorite. The class was in the middle of reading Harry Potter, and wanted to know whether the undergraduates were fans of the popular J.K. Rowling series. The answer was yes, especially given that Harvard’s intramural activities include Quidditch — the magical sport of the Harry Potter world — albeit without the flying broomsticks.

Competition for the Class of 2029 team looks like it will be fierce.