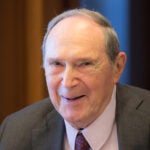 Ruth Simmons, Ph.D. ’73, president of Prairie View A&M University, president emerita of both Brown University and Smith College, and one of the nation’s foremost leaders in higher education, will be the principal speaker at Harvard’s celebration of the Class of 2021 on Thursday, May 27.

“I am delighted to announce that Ruth Simmons will deliver our principal address,” said Harvard President Larry Bacow in a message to the Harvard community today in which he announced the virtual celebration, calling her “among America’s foremost advocates for higher education.”

“Having led a women’s college, an Ivy League research university, and a historically Black university, she has a unique perspective on how very different types of institutions contribute to the fabric of our nation” said Bacow. “She has also defended with great passion the possibility of improving our society by learning from our differences. I very much look forward to hearing her remarks later this year.”

In July 1995 she was chosen to be the ninth president of Smith College. During her groundbreaking tenure there, she focused on expanding access and breaking down academic barriers, perhaps most notably by establishing the first engineering program at a women’s college in the U.S.

Her six-year tenure at Smith ended in 2001, when she was appointed the 18th president of Brown University, and the first African American to lead an Ivy League institution. She was beloved by the Brown community, and her time there was marked by an expansion of need-blind undergraduate financial aid, faculty expansion, enhanced curricula, and new facilities.

Simmons also helped Brown begin to grapple with its historical connection to slavery and the slave trade, establishing the Brown University Steering Committee on Slavery and Justice. In her charge to the group, she asked that they “organize academic events and activities that might help the nation and the Brown community think deeply, seriously, and rigorously about the questions raised,” acknowledging also that the University’s history has given it “a special obligation and a special opportunity to provide thoughtful inquiry.” Today, the committee’s report continues to serve as a blueprint for other institutions reckoning with their own histories of injustice.

Simmons left Brown in 2012 for what she thought was her retirement from leading institutions of higher education. That changed in 2018, when she accepted the presidency of Prairie View A&M University in her native Texas. In taking the reins of the historically Black college, Simmons saw another opportunity to continue opening doors for a new generation, just as Dillard had done for her in 1963.

“How could I turn away from doing for other young people what was done for me?” she said during her inaugural address at Prairie View A&M.

Simmons’ work toward equal educational opportunity also continues outside of the halls of Prairie View. In 2018, she testified on Harvard’s behalf in a lawsuit challenging Harvard College’s right to consider race as one among many factors in the admissions process.

“The beauty of higher education in this country is that it’s very differentiated. We have women’s colleges. We have male colleges, very few, but we have some. We have African American institutions. We have religious institutions. And then we have great research universities like Harvard,” she said in an interview with the Gazette about the lawsuit. “Preserving the flexibility of institutions to create these classes, with very different students coming together, learning from each other, intensifying the environment for learning, both in and outside the classroom, preparing for leadership, is critical.”

Over half a century of distinguished service in higher education, Simmons has received many honors, including a Fulbright Fellowship, the President’s Award from the United Negro College Fund, a Fulbright Lifetime Achievement Medal, the Eleanor Roosevelt Val-Kill Medal, the Foreign Policy Association Medal, and the Ellis Island Medal of Honor. In 1997, she received the Centennial Medal from the Graduate School of Arts and Sciences, and in 2002, was awarded an honorary Doctor of Laws degree from Harvard University. In 2013, she was named Chevalier in the French National Order of the Legion of Honor, the highest decoration bestowed by the French government. 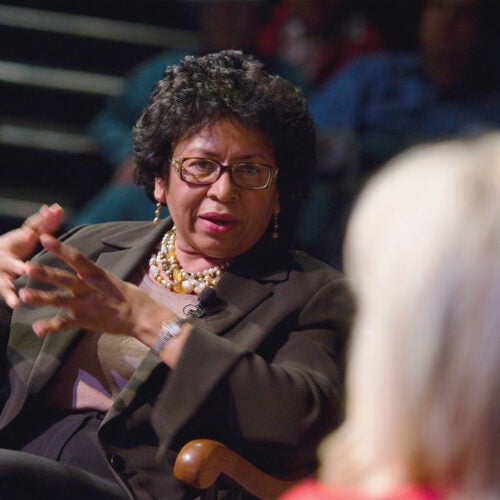 Bacow also announced today that the Harvard community once more would gather virtually in May to award degrees, due to public health and safety concerns related to the ongoing COVID pandemic.

“The delay of our Commencement Exercises for two years running is deeply disappointing, but public health and safety must continue to take precedence,” wrote Bacow. “Though circumstances may well improve by spring, it takes months of planning to prepare for our usual festivities, which draw to campus and to Cambridge thousands of people from around the world. Right now, the risk posed by that possibility is too great, but please know that one day we will welcome the Class of 2020 and the Class of 2021 back to campus for an unforgettable — and unforgettably joyous — Commencement.”