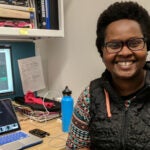 Ants are among the most damaging invasive species in the world, and several types have been spread by human activity around the world. Learning more about these ants and their original natural habitats could help scientists understand more about their evolution as well as how to better control them.

That was the goal of Harvard researcher Waring Trible, whose research took him to Southeast Asia, vowing to turn over maybe not every rock, but a bunch of them (along with other assorted debris), in what would become a somewhat lengthy quest to unravel the origin story of the clonal raider ant, an invasive species found in various parts of the world.

The findings of Trible, a distinguished science fellow in the FAS Center for Systems Biology, and a colleague were recently published in the journal Biology Letters. It represents just one of a handful of cases where the native range of an invasive ant species has been identified.

The analysis involved some genetic detective work that may help scientists better understand the biological factors that allow a species to become invasive. This can one day aid in finding natural biological control agents that could help limit the spread of invasive species.

To make that kind of lab work possible, researchers first had to get out in the field and down in the dirt.

“We wanted to find the closest evolutionary relatives of the species we study in the lab in order to place it at a more precise position on the tree of life,” said Trible, who runs a lab studying the genetics and evolution of ants. “If you can find an invasive species in its native population before humans took it out to the rest of the world, then you might be able to learn what kinds of features of their biology make them particularly likely to become invasive.”

The investigative odyssey began with the team narrowing its geographic search. Trible worked with Sean McKenzie, the study’s other lead author, whom he met when they were graduate students in the lab of Daniel J.C. Kronauer, a professor at The Rockefeller University. Kronauer discovered an ant in India that was closely related to the invasive clonal raider ant but appeared to be a different species. The group then took an educated guess based on genetic data that the source population of the ant should be within a vicinity of about 1,240 miles.

The search area included countries like Pakistan, India, and Nepal, but the scientists settled on Bangladesh because of its huge seaports, which are major shipping routes. This would explain how the blind and subterranean ant could have traveled the world, carried in the soil that sailors used for the ballast of ships. The choice was a gamble, however, because no one had documented the existence of the clonal raider ant in the country before.

Part of that, the researchers postulated, may be owing to the fact that the underground lifestyle of the ants make them easy to miss. People wouldn’t know they existed unless they were looking for them, Trible said.

The species is also queenless and reproduces clonally when embryos from worker ants grow and develop without fertilization. They are only 2 millimeters long, stocky, and are known for being eyeless and heavily armored. They are called raiders because they dig tunnels into the colonies of other ants and pillage their eggs, larvae, and cocooned larvae, called pupae, and feed on them.

Trible and McKenzie traveled to Bangladesh in October 2014. They coordinated with a German NGO to arrange reliable transport and other small but crucial details like hiring a local master’s student named Tawhid Hossain as their translator.

“By the end of the second day, we had a small backpack full of money, a car, a guide and a driver, and we were on the road out toward Western Bangladesh where our contacts knew of a professor out there who could get us started with some places to look for these ants, because we didn’t really have a great idea of even where we could find the ants in the first place,” McKenzie said.

Their mission was complicated by the fact that Bangladesh has little protected land, forest, or completely uninhabited areas where ants like this flourish. Most of the places the pair looked were private yards, construction sites, or small fields like those on university campuses — all of which necessitated flipping not only rocks but bricks and assorted debris from razed buildings.

“From the road, we’d see what looked like a good place, so we would stop the car and our translator, Tawhid, would go find someone and ask them, ‘Who owns this? We have these researchers from America who are looking for ants. Would you mind if we could come look around?’” Trible said.

While the translator would chat with the property owners over tea, Trible and McKenzie would dig for clonal raider ant colonies for an hour or so before moving to the next site.

They had no luck the first few days and the locals thought they were up to something strange.

“A lot of them thought we were eating the ants because they weren’t really sure why a couple of Americans would be crawling around in the dirt trying to find ants if they weren’t good for something,” McKenzie said.

Then they caught their break, turning over a brick and spotting a single clonal raider ant. They pounced, collected it, and started digging. The giant hole turned up only five more ants, but the researchers were ecstatic.

“It was a big relief to know that we wouldn’t come home empty-handed,” Trible said.

Working 16-hour days, they found 16 colonies. Once, they even flipped a rock and found a colony of about 500 ants.

They kept the ants in humid petri dishes. Tragedy almost struck midway through the trip when a quarter of the ants they found died because they left the dishes in the sun too long during a lunch break. That slip made the 24-hour trip home even more nerve-wracking. If none of the ants survived, the trip could be ruined since the researchers hadn’t conducted their sequencing experiments.

“The interesting thing about studying genetics is that we can’t see DNA with our eyes, so when you collect things in the field you don’t know what you have until you get home,” Trible said.

Back in the lab, they got to work mapping the ants’ genetic sequence to see if the Bangladesh population was the source population for this invasive species. They describe the work in the report published in June.

Their analysis showed there were seven different lineages present. Two were identical to two of the four strains already known throughout the world. The other five had never been seen in the hundreds of colonies the researchers and collaborators had studied before. This was a telltale sign that they’d found the source populations. In population genetics, genetic diversity will always be greater in populations where a species originates than in populations where they have been introduced by humans.

The scientists further cemented their finding using a statistical method to build the genealogy, or family tree, of the different strains to see how they are related. That molecular phylogenetic analysis showed that the five new strains share a recent common ancestor with the four invasive strains found around the world — an ancestor that lived in Bangladesh.

“The two findings together are basically a smoking gun,” said Trible.