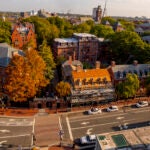 What I miss most about campus since the pandemic…

In an email to the University community, President Larry Bacow today announced publication of the report from the External Review Committee to Review Sexual Harassment at Harvard University, which was convened in response to the case of Jorge Domínguez, a Government Department professor and onetime vice provost for international affairs who engaged in decades of sexual harassment during his time at Harvard.

The Gazette spoke with Deputy Provost Peggy Newell to learn about the review’s findings, as well as resources and policies that Harvard now has in place, and plans to create, to address the report’s recommendations made.

GAZETTE:  Would you begin by reminding us of the context for why this review was conducted?

NEWELL:  In early 2018, the Chronicle of Higher Education published a series of articles stating that Jorge Domínguez, at the time a professor in Harvard’s Government Department, had sexually harassed at least 18 women during his time at Harvard. Shortly after the publication of these articles, the University’s Office for Dispute Resolution (ODR) began an investigation into the harassment allegations. The revelations in the Chronicle also prompted the Department of Government to form a Committee on Climate Change, tasked with examining the climate within the department. Among the recommendations in the Committee on Climate Change’s final report was a call for an external review to examine how procedures, practices, and norms at all levels of the University may have contributed to our collective failure to provide a safe and productive work environment for all members of our community.

In May 2019 Dean Claudine Gay announced both the findings of the ODR investigation — that Domínguez had “engaged in unwelcome sexual conduct toward several individuals, on multiple occasions over a period spanning nearly four decades” — and the sanctions that the University would be imposing on Domínguez as a result. Later that day, President Bacow confirmed that he would form a committee to conduct an external review.

GAZETTE:  What was the charge of the external review?

NEWELL:  President Bacow asked the review committee to explore three central questions that had emerged from the report of the Government Department Committee on Climate Change:

The members of the review committee — Susan Hockfield, professor of neuroscience and president emerita at the Massachusetts Institute of Technology; Vicki Magley, professor of psychological sciences at the University of Connecticut; and Kenji Yoshino, professor of law at New York University — were asked to take a forward-looking stance in their work, using the Domínguez case to identify factors that might continue to undermine Harvard’s ability to prevent and address sexual harassment.

GAZETTE: What were the main findings of their report?

NEWELL:  The committee’s report is incredibly thorough, and I would encourage community members to read it in its entirety. It clearly outlines several cultural and organizational factors that allowed Domínguez to escape accountability for so long, and suggests concrete, actionable steps that Harvard can take to create an environment free from harassment and discrimination. These recommendations include: fostering greater “psychological safety” across our Schools and units, better communicating processes for reporting misconduct, achieving greater faculty gender balance, establishing standardized processes for vetting candidates, improving transparency around investigations and sanctions, monitoring employees with past infractions, and accelerating progress toward a culture that is intolerant of sexual and gender-based harassment, broadly. Some of these things we have been working on already. Other recommendations will be the foundation for new initiatives.

The report emphasizes that we can accomplish these changes without compromising our commitment to academic freedom or the due process rights of our community members. It is a forward-looking document that encourages community engagement in advancing its recommendations. President Bacow has said in the past that each of us shares responsibility for confronting and stopping sexual harassment, sexual assault, and discrimination, here at Harvard and beyond our campus walls, and I think the report really underscores this statement.

GAZETTE: As you mentioned, Harvard has already been at work at addressing some of the recommendations made in the report toward creating an environment free from harassment and discrimination. Would you tell us about some of the resources to this end that are currently in place for community members?

NEWELL:  To begin with, it’s important to note, as the report does, that we have made significant progress in our Title IX initiatives since the office was created in 2013 and moved to the Provost’s Office in 2015. Annually, more than 27,000 students, faculty, and staff participate in in-person training sessions and/or our online Title IX training module — everyone who studies and works at Harvard is now required to complete mandatory online training on how to support a harassment-free community. These have continued online during the pandemic. There are now more than 50 trained Title IX Resource Coordinators supporting Harvard’s students, faculty, and staff community-wide. Title IX and Gender Equity Education Student and Staff Advisory Committees meet regularly to ensure that each School and unit is represented in discussions about how the Title IX Office can improve its prevention initiatives, educational materials, and informational resources across the University. In 2019, the Title IX Office launched bystander intervention trainings, and the Resource for Online Anonymous Disclosure (ROAD), an online tool for anonymously disclosing concerns of sexual harassment and other sexual misconduct. All of this work has gone a long way in improving our policies and procedures around Title IX, and in beginning to change our culture.

Harvard’s commitment to addressing sexual and gender-based harassment stretches outside of campus. In collaboration with the National Academies of Sciences, Engineering, and Medicine Action Collaborative on Preventing Sexual Harassment in Higher Education, we are working to identify and develop innovative and evidence-based solutions to address sexual harassment. With more than 60 colleges, universities, and research institutions, Harvard is leading conversations around identifying the most effective ways to measure and monitor the climate within an organization. Through these conversations, institutions have been able to share best practices in developing climate surveys and measuring sexual harassment prevalence.

And we continue to move forward with new initiatives that address sexual harassment and discrimination here at Harvard. Just this past week, Provost [Alan] Garber announced that we are embarking upon a community-driven effort to examine how we address discrimination and harassment. We have invited faculty, students, and staff from across the University’s Schools and units to help us evaluate existing, and in some cases develop new, University-wide policies and procedures related to sexual misconduct, discrimination, and bullying.

GAZETTE: You also said that specific recommendations within the report will provide the foundation for upcoming initiatives. Has the planning begun on what some of these might look like?

NEWELL:  Yes. Thanks in large part to University Title IX Coordinator Nicole Merhill and her office, we are already working to put new resources in place that correspond directly to the recommendations made by the external review. Some examples of what we will do moving forward include incorporating the concept of “psychological safety” into future learning initiatives implemented by the University Title IX Office, and exploring how we can revamp the Title IX Office website so that it provides clear pathways for disclosing incidents to Title IX Resource Coordinators and for filing a formal complaint with the University Title IX Coordinator. The updated Title IX website will also include a “Gender Equity Data Hub,” which will provide greater transparency on information pertaining to disclosures, formal complaints, and outcomes.

The Department of Government has continued to make progress on implementing the recommendations of its own Committee on Climate Change, including the creation of a Title IX liaison position within the department to serve as a point of contact for all Title IX-related concerns, and the creation of a standing committee on equity, diversity, and inclusion, made up of faculty, staff, graduate students, and undergraduates, to assist the department in creating and maintaining a climate that allows its members to do their best possible work. The department has also committed to conducting a biennial climate survey of its community to measure progress toward the goals laid out by the Committee on Climate Change.

In spite of all that we have done in the area of creating policies and launching new initiatives, we still have work to do until we have a culture in academia and at Harvard that does not tolerate harassment. Changing an organizational culture cannot be done by an office in central administration or by people in the dean’s office alone. Having policies against harassment is necessary but not sufficient. If we want a better environment, it will require that we all take responsibility for the community in which we would like to live and work and that we all participate in the work necessary to build that community. The recommendations in this report give us a place to start.

GAZETTE: Is there anything else you’d like to add?

NEWELL:  I would like to reiterate President Bacow’s words in saying that we are deeply sorry not only for the harassment that Terry Karl experienced at Harvard but for the harassment by Domínguez of other women at Harvard that might have been avoided. We are grateful to Professor Karl for having the courage back in 1983 to bring her complaint and for continuing, now nearly 40 years later, to raise concerns when she believed that Harvard had not done all that it could to assure that others were not similarly harassed. We also apologize and express our gratitude to the other women who were later harassed by Domínguez and who have shared their stories, and especially to those who brought formal complaints that ultimately resulted in Dean Gay’s sanctioning of Domínguez. We are grateful for all of your efforts to make Harvard a better place.

We are grateful for the work of the members of the External Review Committee, who have spent significant time on this important process since it began in September 2019. Harvard provided the committee with full access to all of the relevant materials that it requested, including confidential files and reports, as well as access to all personnel it sought to interview. This was no small undertaking for the committee. We appreciate their diligence in making sure that their review was thorough and responsive to their charge. We learned a lot from their work and will assure that their efforts and advice are translated into action.

We are also grateful to those Harvard community members who gave of their time to the process, including: students and faculty in the Government Department; the members of the Government Department’s Committee on Climate Change; current and former University administrators; representatives from the Harvard Title IX Office and Office for Dispute Resolution; and to individual members of Harvard’s faculty who have done significant work in areas relating to Title IX and organizational culture.