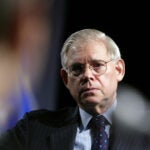 Gustave M. Hauser — who with his wife, Rita, established the Hauser Center for Nonprofit Organizations in 1997, endowed two faculty positions, supported extended visits by prominent public leaders, and funded the recent renovation of the Center for Public Leadership — died Feb. 14 after a long illness.

Hauser will be remembered across Harvard for his steadfast support and enduring generosity. At Harvard Kennedy School, the Hausers focused especially on the nexus of public policy and civil society. The Hauser Center became part of the Center for Public Leadership in 2013, when it was renamed the Hauser Institute for Civil Society. A signature project, the Hauser Leaders Program, is now in its seventh year of bringing distinguished leaders from the public, nonprofit, and private sectors to Harvard to learn from and enrich the University community. The Hausers also funded the Hauser Professor of the Practice of Nonprofit Organizations, a position held today by Cornell William Brooks, and the Rita E. Hauser Senior Lecturer in Leadership and Civil Society, a position now held by Marshall Ganz. Most recently, the Hausers enabled a renovation of the space occupied by the Center for Public Leadership.

“Gus Hauser was a remarkable person who cared deeply about creating positive change in the world. His interest in developing ethical leaders who can work across sectors to make a difference has had a significant impact both at Harvard and beyond,” said Douglas Elmendorf, dean of HKS.

Harvard President Larry Bacow said, “I was privileged to serve as a Hauser leader-in-residence at the Center for Public Leadership in 2015, where I saw firsthand the good that continues to derive from the Hausers’ generosity. Gus cared about making an impact, and his and Rita’s thoughtful philanthropy made Harvard — and the world — a better place.”

Among his public service activities, Hauser was twice appointed by the U.S. president to serve as director-at-large of the U.S. Overseas Private Investment Corporation, of which he was a founder.

Gus and Rita Hauser founded The Hauser Foundation Inc. in 1990. In addition to their extensive support of Harvard Kennedy School, they were the crucial donors for Hauser Hall at Harvard Law School and for the Harvard Initiative for Learning and Teaching. They also served as honorary chairs of the most recent Campaign for Harvard University.