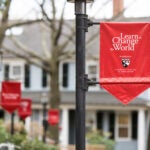 The Center for Jewish Studies and the Hutchins Center for African & African American Research debut Monday “Black & Jewish: A Conversation,” the first installment of a new joint venture to shed light on the multifaceted nature of Black and Jewish identities in North America.

“Black & Jewish” is the first of three scheduled events this semester in the “Black & Jewish Talk Series,” focused on culture, politics, and religion.

“There is a lot of focus on the relationship between Black communities and Jewish communities in the U.S., but Black and Jewish identity hasn’t received very much scholarly attention,” said Sara Feldman, a preceptor of Yiddish in the Department of Near Eastern Languages and Civilizations and a co-organizer of the series. “There are many people in the United States who identify as both Black and Jewish. It’s time that their voices are amplified here at Harvard.”

“Black and Jewish: A Conversation,” takes place with vocalist and composer Anthony Russell and Rebecca Pierce, a writer and filmmaker. The discussion will be moderated by Katya Gibel Mevorach, Professor of Anthropology and American Studies at Grinnell College, and will focus on how Jewish diversity is discussed in public life and how it can and should change.

“Among the contents of something so firmly established as American Jewish identity, I think it’s important for Jews of color in general and Black Jews in particular to articulate their relationships to and experiences of Judaism and modern Jewish life, to paint themselves back into pictures of the past and the future they have been left out of, either unwittingly or by design,” said Russell. “Conversations like the ‘Black & Jewish Talk Series’ present an opportunity for us to apprise our communities of a reality that has been here for a long time.”

“This series happens to be taking place during a conversation about how American institutions, including Jewish institutions, deal with race, and how Harvard is trying to reckon with its own legacy of racism,” said Feldman. “We anticipate that some of our speakers may talk about how American Jewish institutions need to change the way that they handle issues of race so that they can be inclusive of all members of the community.”

“I’ve often said the Black community isn’t a monolith. The same is true for the Jewish community. Both communities are rich in diversity, and a part of that diversity is that within the Black community there are people who are Jewish, and within the Jewish community there are people who are Black,” added Henry Louis Gates Jr., Alphonse Fletcher University Professor and director of the Hutchins Center. “What we hope to accomplish with this collaboration between the Hutchins Center and the Center for Jewish Studies is to start a conversation about both Black diversity and Jewish diversity, and the many ways in which these two communities, both so rich in history, intersect with one another.”

Feldman and her co-organizers also hope that the series will inspire students and researchers to learn more about Black and Jewish experiences and scholarship they may not have learned about otherwise.

“My Yiddish language students, whether they are people of color or not, express a strong interest in matters of social justice and inclusion, and our students want to explore facets of Jewish identity that they could not access before coming to Harvard,” said Feldman. “All institutions still need to do some work on broadening their representation of and catering towards people with different identities.”

Other planned events this spring include a conversation on food and culture with culinary historian and author Michael Twitty, and a panel featuring social justice activist Mayaan Zik and scholar Rebecca Ginsburg. Feldman had also hoped to invite labor activist and civil rights leader Karen Lewis, and her recent death underscored the urgency of having these conversations now and often.

“As the country mourns the loss of Karen Lewis, we value the opportunity to gather together this group of accomplished leaders and luminaries in their fields, and hearing about their perspectives and experiences of being Black and Jewish,” said Feldman.