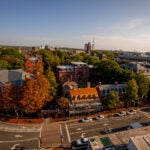 Path at the Arnold Arboretum shows trees’ perseverance and beauty

View all of Photography

About five years ago, I stepped through the Arnold Arboretum’s South Street gate and saw three magnificent beech trees covered in a dusting of snow. I decided I would photograph these beauties in every season.

I visited my magnificent friends whenever I could, noting the copper-colored leaves that hung on long after the snow fell and the way the roots under the snow looked like gigantic, prehistoric toes. Sitting under the boughs of a parasol (Tortuosa) or weeping beech (Pendula), cultivars of the classic European beech, is like looking up at the stars. You’ll soon find yourself on your back, just gazing.

A year or so into my project, I showed up one day to find only two of my beeches — the third had been turned into a pile of logs. I was disheartened.

As it turned out, many of the trees in the Arboretum’s extensive holdings of European, Asian, and American beeches had been suffering from beech bark disease, an insect-vectored fungal illness that threatened the Arnold Arboretum’s nationally accredited collection of some 130 specimens. The disease was exacerbated by drought. In 2018, Arboretum horticulturists removed a number of trees in severe decline, and pruned heavily infected stems from many others in an effort to mitigate damage from the disease.

Since a healthier environment boosts the outlook for infected trees, they improved the area’s soils by adding native herbaceous perennial plants to the understory. Some of Beech Path is cordoned off to encourage the growth of this ground cover, and prevent soil compaction. On a winter morning, peering over the rope, you’ll see that while a few beech trees are recovering, many seem to have never felt the disturbance at all. Some, in fact, are entering their third century on this special hill.