Wielding a laser beam deep inside the body 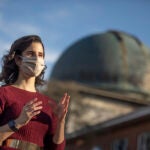 Astrochemist brings search for extraterrestrial life to Center for Astrophysics

Robotic engineers from Harvard’s Wyss Institute and John A. Paulson School for Engineering and Applied Science (SEAS) have developed a laser-steering microrobot that can be integrated with existing endoscopic tools, which are used in minimally invasive surgeries. Their approach was reported in Science Robotics.

The ends of endoscopic tools must be highly flexible to enable visualization and manipulation of the surgical site in the target tissue. In the case of energy-delivering endoscopic tools, which allow surgeons to cut or dry tissues and stop internal bleeds, a heat-generating energy source is added to the end of the device.

Currently available energy sources, delivered via a fiber or electrode, limit surgical precision and can cause unwanted burns in adjacent tissue sections and smoke development. While laser technology would be an attractive solution, the laser beam needs to be precisely steered, positioned and quickly repositioned at the distal end of an endoscope, which cannot be accomplished with the currently available relatively bulky technology.

Led by Wyss Associate Faculty Member Robert Wood, the Charles River Professor of Engineering and Applied Sciences, and postdoctoral fellow Peter York at Wyss Institute for Biologically Inspired Engineering and SEAS, the laser-steering microrobot, in its miniaturized 6 by 16 millimeter package, can operate with the necessary high speed and precision required for minimally invasive surgeries.

“To enable minimally invasive laser surgery inside the body, we devised a microrobotic approach that allows us to precisely direct a laser beam at small target sites in complex patterns within an anatomical area of interest,” said York, the first and corresponding author on the study and a postdoctoral fellow on Wood’s microrobotics team. “With its large range of articulation, minimal footprint, and fast and precise action, this laser-steering end-effector has great potential to enhance surgical capabilities simply by being added to existing endoscopic devices in a plug-and-play fashion.”

The team needed to overcome the basic challenges in design, actuation, and microfabrication of the optical steering mechanism that enables tight control over the laser beam after it has exited from an optical fiber. These challenges, along with the need for speed and precision, were exacerbated by the size constraints — the entire mechanism had to be housed in a cylindrical structure with roughly the diameter of a drinking straw to be useful for endoscopic procedures.

“We found that for steering and re-directing the laser beam, a configuration of three small mirrors that can rapidly rotate with respect to one another in a small ‘galvanometer’ design provided a sweet spot for our miniaturization effort,” said second author Rut Peña, a mechanical engineer with micro-manufacturing expertise in Wood’s group. “To get there, we leveraged methods from our microfabrication arsenal in which modular components are laminated step-wise onto a superstructure on the millimeter scale — a highly effective fabrication process when it comes to iterating on designs quickly in search of an optimum, and delivering a robust strategy for mass-manufacturing a successful product.”

The team demonstrated that their laser-steering end-effector, miniaturized to a cylinder measuring merely 6 mm in diameter and 16 mm in length, was able to map out and follow complex trajectories in which multiple laser ablations could be performed with high speed, over a large range, and be repeated with high accuracy.

To further show that the device, when attached to the end of a common colonoscope, could be applied to a life-like endoscopic task, York and Peña, advised by Wyss Clinical Fellow Daniel Kent successfully simulated the resection of polyps by navigating their device via tele-operation in a benchtop phantom tissue made of rubber. Kent also is a resident physician in general surgery at the Beth Israel Deaconess Medical Center.

“In this multi-disciplinary approach, we managed to harness our ability to rapidly prototype complex microrobotic mechanisms that we have developed over the past decade to provide clinicians with a non-disruptive solution that could allow them to advance the possibilities of minimally invasive surgeries in the human body with life-altering or potentially life-saving impact,” said senior author Wood, who also is the Charles River Professor of Engineering and Applied Sciences at SEAS.

Wood’s microrobotics team together with technology translation experts at the Wyss Institute have patented their approach and are now further de-risking their medical technology (MedTech) as an add-on for surgical endoscopes.

The study was funded by the National Science Foundation under award #CMMI-1830291, and the Wyss Institute for Biologically Inspired Engineering.

This was adapted from a press release by Benjamin Boettner of the Wyss Institute.