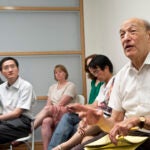 Most economists live in the world of theory, using careful calculations to predict the future. But Richard N. Cooper believed theory couldn’t tell the whole story when it came to solving real-world problems, particularly when they involve the whole world — which he amply demonstrated after a global recession in the 1970s.

Cooper, who died Dec. 23 at age 86 from cancer, left his mark on the world of economics from his position at Harvard, where he taught for almost 40 years, and from the White House, where he worked under four different presidents as an adviser and policy expert.

As a researcher, Cooper was a trailblazer. Six years after receiving his Ph.D. from Harvard in economics in 1962, he published his landmark book, “The Economics of Interdependence: Economic Policy in the Atlantic Community.”

In the book and in associated research on the subject, Cooper argued that “countries could achieve better outcomes if they committed to joint settings of macroeconomic policy,” wrote Jeffrey Frankel, James W. Harpel Professor of Capital Formation and Growth at the Harvard Kennedy School, in a blog post remembering his friend.

The argument, widely accepted today in economics, was a departure from established ideas popularized by John Nash’s non-cooperative equilibrium theory, which dictated each country should go it alone on economic policy and implementation. Cooper saw an alternative, in which countries could work in tandem to reduce inefficiencies and promote prosperity in a collaborative and coordinated way.

“He was always asking the right question, and always interested in taking the discussion of any piece of work right to the question of why it mattered for economic policy, and what should be done as a result,” added Benjamin Friedman, William Joseph Maier Professor of Political Economy.

For the next 60 years, Cooper remained engaged with the world of monetary policy and traditional economic theory and implored his colleagues and students to ask themselves whether the work they were doing would be relevant outside the ivory tower.

In economics, “It’s very tempting to make assumptions so that you can proceed with your analysis, but [Cooper] would always give us a hard time when he thought [our] assumptions weren’t reasonable,” said Rogoff. “He was somebody whose feedback you wanted because it might help you shape your work in a more useful way” when it came to practical applications.

Born in Seattle, Cooper received a bachelor’s degree at Oberlin College and a master’s degree at the London School of Economics as a Marshall Scholar. After receiving his Ph.D., he taught economics at Yale and was provost there from 1972-74.

In 1981, he joined the Harvard faculty, where he influenced generations of economists to expand their understanding of their field and recognize the value of real-world experiences in shaping policy and theory. He was a strong presence in seminars, workshops, and lectures, where he could be counted on to share knowledge and opinions.

“He asked tough questions, was an incredibly knowledgeable person, and was very vocal about things he didn’t like or didn’t think were important,” said Pol Antràs, Robert G. Ory Professor of Economics. “But he was always very kind and interested in my work. Even though I knew that it wasn’t the type of research he would be doing, I felt like he respected it. That was very uplifting for me.”

During his tenure as a professor, Cooper also held numerous senior positions in the federal government. His first was as a senior staff economist on President John F. Kennedy’s Council of Economic Advisers — a job he reportedly rode his bicycle to every day. He also served as Deputy Assistant Secretary of State for International Monetary Affairs under President Lyndon B. Johnson, Under-Secretary of State for Economic Affairs under President Jimmy Carter, and chair of the National Intelligence Council as part of the Clinton administration.

In the 1970s, Cooper developed the “locomotive theory” of international fiscal coordination, in which three nations (Japan, Germany, and the U.S.) would “pull” the global economy to safety following a recession in the mid-1970s. The idea was put to the test at the 1978 Bonn Summit of G-7 Leaders attended by Carter, who had appointed Cooper to the State Department post the year before. At the gathering, the nations agreed on a joint statement of commitments regarding economic policy — the first successful agreement of its kind and a model for future such accords.

The establishment and continuation of the G-7, and later G-8 and G-20 meetings of world leaders to focus on joint economic policy, years after Cooper’s work, are examples of his influence both as a researcher and policy expert, said Frankel.

Cooper was also the chair of the Federal Reserve Bank of Boston from 1990-1992, and was a member of the Trilateral Commission, the Council on Foreign Relations, the executive panel of the U.S. Chief of Naval Operations, and the Brookings Panel on Economic Activity. His many publications include the volumes “Environment and Resource Policies for the Integrated World Economy,” “Boom, Crisis, and Adjustment: The Macroeconomic Experience of Developing Countries,” and “What the Future Holds: Insights from Social Science.”

Cooper’s career showed that “you can do research and be engaged in policy as an economist, and find the combination fruitful and productive,” said Antràs. “He was not interested in his own fame. [He] was interested in understanding the world and making the world better.”

Cooper, who Frankel said was always “young for his age,” was also an avid home repairer and world traveler, and he enjoyed exploring the bicycle paths around Cambridge, which he rode until last year with his family and friends.

“He had boundless intellectual curiosity and energy [and] looked on the bright side of things,” Frankel wrote in his remembrance. “I learned something from him every time we talked.”

A memorial is planned for a future date.