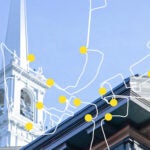 Called UpStagedAID: One World, Every Student Voice, the nationwide competition was billed as the biggest virtual college a cappella championship in history. It started with a pool of more than 5,000 groups before being narrowed to 64 of the nation’s best college a cappella groups and put into a March Madness-style bracket for public voting.

With their tournament submission, a video made pre-COVID of Labrinth and Zendaya’s “All For Us,” the Opportunes made it to the top rounds (with titles such as “Singing Sixteen,” “Ultimate Octet,” and “Closing Quartet”) before gathering via Zoom to watch the Jan. 18 announcement of the last group standing. The winner was decided by a panel of judges.

“They uploaded the video at noon so we screen shared and watched together,” said Carly Tiras ’22, president of the group. “We were all really excited. … I’m glad that we got to share that moment together, even though we could not be together in person.”

The $3,000 first place prize is split between the Opportunes and a charity of their choosing. The group chose the NAACP Legal Defense & Educational Fund because of the social unrest felt so acutely when they submitted the video last August.

“We thought that it was a natural time to highlight the NAACP in light of George Floyd and the [Black Lives Matter] protests,” said Ben Dreier ’22, the Opportune’s music director. “It’s a historic issue: Underrepresented minorities not getting proper legal defense and at the NAACP, they have this great, historic, [and] really effective program to try to combat that.”

Tiras, who has one of the solos in the song, and Dreier said the group selected their rendition of “All for Us” because it was a stellar performance, and because so many people were involved in the overall production.

The Upstaged competition may have lacked some of the traditional pre-performance jitters that make live performances so exciting but it was still good for the group, which hasn’t been able to sing live together because of COVID, to keep people invested in creating art together, Drier said.

Established in 1980, the Opportunes aren’t accustomed to having their vocal chords so far apart. During the pandemic the group has stayed in touch through texts and calls and have even recorded songs they arranged last year.

While the group is psyched with the win, they can’t wait to reunite.

“There’s nothing like performing live, especially when it’s so dependent on the people you’re performing with and how it sounds together,” Tiras said. “I’m really excited to get back to that when we can.”