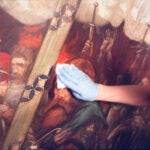 Everybody has at least one impossible-to-buy-for, already-has-everything person on their holiday shopping list. What to do? How about a one-of-a-kind, handmade item produced by a hard-working artist who’s kept busy through the shutdowns by painting, molding, drilling, photographing, baking, sewing, or tattooing at home or in the studio? Now and through Valentine’s Day, in partnership with Harvard’s Allston-Brighton Winter Market, these artists are letting their creations go. The annual market, now in its fourth year, offers fine art, artisanal goods, unique services, one-off commissions, and handcrafted gifts. While Harvard partners with the vendors, 100 percent of the sales go straight to the creators. Like most everything else this year, the market is virtual. But the artists are real. Seven of them tell their stories here.

As a preteen, Zina Worley worked as an apprentice alongside her mother, a fashion designer. At first she was only allowed to cut the pattern pieces, but by the third year she was assembling them (like a puzzle) and making her own clothes. “Did I mention I like to put puzzles together?” asks Worley. She made her first skirt in an hour. When Calvin Klein introduced his jeans, Worley — still in high school — introduced hers, too, stitching a large Z and a W on each of the back pockets. Friends and classmates began placing orders for her clothes.

“I realize that I’ve always had the creative juice running through my veins. Most of my summers were spent at camp and I could be found in the arts and crafts cabin making something —everything from macramé, stamp making, and leather belt making.”

During the ’80s Worley designed for fashion shows at various hotels in Boston’s Back Bay, focusing on wool and linen. Her brand grew to include coats for men and women, as well as handbags, hats, scarves, mittens, wraps, and ponchos. Next, she sewed and sold outerwear for infants and toddlers. Currently, Worley works on a leather-sewing machine creating handbags, totes, and wallets.

“I enjoy taking a piece of fabric or leather that’s like a blank slate, looking at it, and turning it into something that someone will carry, use, or wear that will last a lifetime. The best part of that item [it’s that it’s] created from my mind and hands, [so] there is only one.”

Like her mother, Alicia Thomas is an introvert. Her mother, a former manicurist who is now a landscape photographer, once said that in a perfect world she’d work at a funeral home so her clients would be quiet and still, and for Thomas too the idea of being alone with a client was terrifying. “Dealing with people was definitely one of the biggest hurdles I had to overcome. I am incredibly thankful for my career choice because it has forced me into situations I never would have chosen on my own,” says the tattoo artist.

Thomas says the great moment in her workday is when a client looks in the mirror “and they see this beautiful piece of artwork that they chose to have added to their body … It’s like helping people put armor on, and I’m so happy and thankful I get to be part of that.”

“Becoming a tattooer, for me as a child, was the equivalent of becoming a rock star. I was always fascinated with the idea and drawn to the concept, but I didn’t think I had the personality to fit the criteria,” she says. “I’m a little bit of a square, the type of kid that asked for extra homework. The tattooers that I knew growing up were a little intimidating and living on the edge. I’ve never been that that person.”

Thomas says she draws creative inspiration from nature, animals, books, comics, all sorts of media, and her interactions with others.

“My creativity comes from my connection I have with my inner child. My life has become a journey of bridging my subconscious and conscious mind. I am also very competitive with myself, so I strive to be better. Each time I touch the canvas. I feel like every moment of living is art. Everything around us is art. It’s up to you to see or feel the wonder. You have to truly let go of all beliefs and principles taught to you and surrender to the will of the universe to be willing to receive the encrypted messages in the natural world around us,” says Sherwin Long.

Long, who calls himself “an illustrator by degree” but an “all-around artist who writes, draws, paints, cooks, dances, yoyo’s, performs poetry and does martial arts,” says his first language was drawing. His mother gave him a “How-to-Draw” book before he could talk, and that gave him a sense of fulfillment he couldn’t find anywhere else. “It gave me the power to go to my own universe anytime, anyplace”

As a student at MassArt, Long made the switch from graffiti to studio art, but still incorporates graffiti style in everything he makes. “The difference now is instead of trying to do something that just looks cool, I want it to convey a message or social commentary. I’m looking to empower or impact the viewer on a subconscious level.”

For ceramicist Adria Katz, having a community at her clay studio has been especially influential in her development as an artist. “Finding friendships with people who do clay is the best part — peers can be very inspiring. Just having a community of people who you are thrilled to work next to and catch up with. I guess that’s particularly salient right now since the studio is closed.”

Katz, who finds inspiration in nature, says she is mostly motivated by a need to use her hands. “If I didn’t, they would go stir crazy,” she says. She found her passion when a childhood friend introduced her to working with clay and encouraged her to join classes at the local YMCA.

“I started doing clay in high school at the Y. It was a social time for me and a creative time — I went to a science high school — and I really enjoyed clay. When I went to college it fell briefly out of my life, and when I noticed its absence, I really realized I wanted it in my life. I got a summer job at the Newport Pottery Guild, and then started taking classes at RISD [Rhode Island School of Design] and local ceramics studios. The same thing happened when I moved to Boston. About a year went by before I realized how much I was missing clay and that’s when I got involved at the Harvard Ceramics Program. Since then, I haven’t let it fall out of my life again!”

At age 5, when he still needed a chair to reach the counter, Rick Warner asked for a mixer. Baking was his first love. After high school he headed to culinary school, then went on to spend more than 20 years as an executive pastry chef. What keeps him hooked, he says, is that baking challenges him on two levels.

“Candy-making is both an art and a science,” he says. “I can create new flavors and test out ideas, but you also need to know the science of candy-making, and I like the exactness of that part of it as well.”

As a chef, Warner was tasked with making large-scale candy showpieces like the 1,000 marzipan sneakers he made for Reebok. Another time he orchestrated the construction of a 6-foot-tall gingerbread house. “I enlisted a team of six chefs and other helpers to create this one-of-a-kind, large-scale experience. Back then this was never done. It took 4,000 man-hours to create, decorate, and put together. It had a Santa Claus, snowmen, etc., all made out of candy” or other treats, he says.

Warner doesn’t know where his creativity comes from. “I can’t really explain it. It comes through me and I just know how to do it. People come to me when they need something special with allergies, because I can figure out how to create a recipe that works for any person [and] that tastes really good. I like the challenge and find it warms me to be able to make everyone something special. … This heightens my creative brain.”

Putnoi remembers a professor at The Museum School telling her, “If you can stop now, stop!” She couldn’t, and she hasn’t.

“I have to make art, it’s like breathing or eating for me,” Putnoi says. “The motivation or creativity comes from the deepest part of me, I don’t even know how to name it. I love color, mixing color, finding color, and creating texture, and drawing, always drawing. The pencil is really like an extension of my soul, an inner knowing.”

In the Brighton Center house where she works with husband, pastry chef Rick Warner (the same Rick Warner featured here), Putnoi has a studio, teaching space, and gallery. She has been exhibiting her work since her early 20s.

“One of my first shows was with Nam June Paik at the Barbara Gillman Gallery and there were thousands of people at the opening. I am an introvert and all I wanted to do was hide (which I did for most of the opening). I love making the work, being immersed in the messiness of process and exploration, but the being seen at openings and that whole part of it is very hard for me,” she says.

“I have always made art since I was a small girl. It is the way that I stay sane in this world. I find pure joy and freedom in the flow of the creative process. I don’t have to think when I am working. Another part of me takes over and I follow along on the journey of my hands.”

Just a few years ago, when Rafi Sofer bought his first macro lens for his camera, he started on a journey. Since that day, he has photographed more than 700 fire hydrants, mostly in Greater Boston.

The hydrant series is an extension of an earlier journey, begun shooting alongside his father, an avid photographer. Sofer considers himself an artist, and photography just one of his mediums. Another is his day job as a sound engineer, for which he sets up acoustic spaces and sonic playgrounds.

“I recently was asked to produce a large, 4-foot-by-6-foot metal print for a fire fighter in Florida. He really liked a particular blue-and-orange hydrant — a Kennedy Valve hydrant — that’s in North Cambridge. When I examined the image to prepare it for printing, I realized it wasn’t quite good enough to be printed that large, and I went out and searched for the hydrant — hoping I could retake the image with a better camera and under better conditions. On my first search for it, I didn’t find it! Many of the hydrants in that neighborhood had been painted or replaced, but I hadn’t found this particular hydrant. Using Google Earth I was able to locate the hydrant on a map — and I discovered I had walked right by it and hadn’t seen it. Completely confused, I went back and discovered it — under a barrel — slated for replacement! It still looked perfect and beautifully distressed and colorful — as it looked when I first found it, so I removed the barrel and reshot the hydrant. [This was] just a few days before it was replaced — gone forever.