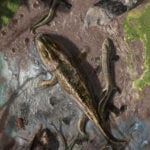 Life is better under the sea. Take it from a group of Harvard undergraduates who in late October were among the first to glimpse life on the ocean floor about 10 miles off the coast of Santa Lucia, Calif.

As part of their deep-sea biology course, OEB 119, more than 40 students were patched in via livestream and a satellite call to a team of researchers leading an exploration mission by the marine research vessel Nautilus. The students were able to see first-hand how deep-sea exploration happens, and even ask questions of the team controlling the vessel’s remote operated vehicle (ROV), Hercules, as it dove 3,000 meters into sea. They saw the sea urchins, red shrimp, deep-sea eel, and watched as the pilot of the ROV took a sample of a sea star.

“Our class had the site up in one window and a Zoom with the class open in another,” said Max Christopher ’23. “The ROV pilots were able to tell us about how they navigate the seafloor with only a small line of sight in the darkness and the researchers helped explain what they were looking for on the bottom.”

Kemi Ashing-Giwa ’22, added: “We learned not only about the many different species that inhabit the area, but also about how deep-sea exploration works on a logistical level. The whole experience was fantastic.”

The virtual deep-sea adventure was set up by Professor of Organismic and Evolutionary Biology Peter R. Girguis, who is the course’s instructor and also an adjunct oceanographer in applied ocean physics and engineering at Woods Hole Oceanographic Institution. Girguis has led multiple cruises as a chief scientist with on the research vessel Nautilus, as well as onboard the Schmidt Ocean’s research vessel Falkor. He reached out to the National Oceanic and Atmospheric Administration and colleagues at the NOAA funded Ocean Exploration Trust, which operates the Nautilus, to connect with about having his students sit in on a mission.

“A lot of it is really introducing students to the largest habitat on Earth,” Girguis said. “It was a way of having a shared experience on Zoom that felt more connected to one another than just a typical class.”