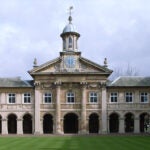 “The outstanding students admitted today come from every corner of the United States and the world and have an incredible array of talents and experiences,” said William R. Fitzsimmons, dean of admissions and financial aid. “Given the high number of remarkable applicants to date, Harvard has taken a conservative approach to admitting students in the early admissions process to ensure proper review is given to applicants in the regular admissions cycle.”

All students deferred in the early admissions process will be considered again in the regular action cycle. Regular decision applicants are slated to be admitted in late March.

Harvard’s generous financial aid program was cited as a factor by student and families in Zoom sessions as a reason for applying. As always, many of the students admitted early have yet to file complete financial aid materials. Harvard’s financial aid program — bolstered by the Harvard Financial Aid Initiative (HFAI)— aims to make the College accessible to any student who is admitted. Approximately 55 percent receive need-based scholarships, paying an average of $12,200 per year. Twenty percent of families pay nothing, and Harvard does not require loans. International students receive the same financial aid consideration as domestic students.

So far, nearly 17 percent of the admitted students come from first-generation college backgrounds compared with 10.1 percent last year. In addition, this year 14.5 percent are estimated to be eligible for federal Pell Grants for those demonstrating exceptional need, up from 8.9 percent, and 21.7 percent are eligible for HFAI, an increase from 15.6 percent.

Students were notified of early action decisions via email at 7 p.m. on Dec. 17. Those admitted are not obligated to attend and have until May 1 to make their final decision. At this time, Harvard is planning to maintain its current deferral policy for this admissions cycle.

The deadline to apply for regular decision is 11:59 p.m. Eastern Time on Jan. 1.