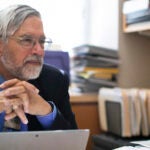 Few expected President Trump, who headed into Election Day in 2016 complaining the election was rigged against him, would accept defeat gracefully this time. In the week and a half since Joseph R. Biden Jr. was declared the winner of the 2020 election, Trump has continued to assert without evidence that he won the race and his opponent was the beneficiary of voter fraud.

The president also has continued an ongoing purge of Pentagon and security officials, including Defense Secretary Mark Esper, M.P.A. ’95, who disagreed with him on sending military troops to control Black Lives Matter protests. On Tuesday, he fired the Department of Homeland Security’s cybersecurity chief Christopher Krebs for declaring the 2020 election secure.

Growing speculation that Trump may soon replace the directors of the FBI and CIA has alarmed many across the political spectrum. Some critics call the recent conduct the temper tantrum of a sore loser; others fear the rumblings of some kind of slow-moving coup d’etat. Harvard national security analysts and scholars say that an illegal occupation of the White House after Biden’s term would begin is improbable, but that there is cause for concern.

Overhauling Pentagon leadership is “potentially a serious crisis” if it leads to the president taking some “untoward action,” such as declassifying highly sensitive intelligence sources and methods or withdrawing all U.S. troops from strategic locations overseas, or if external events prompt some crisis, said retired Lt. Gen. James R. Clapper, who served as director of national intelligence from 2010 to 2017.

“I really can’t divine the purpose of these purges and the installation of what I call political commissars. As a citizen, I’d much prefer the A team be in these positions.”
— James R. Clapper, former director of national intelligence, 2010-17

“I really can’t divine the purpose of these purges and the installation of what I call political commissars. Is it vindictiveness, [to] take action, [to] take care of toadies, or some combination?” said Clapper, a senior fellow of the Belfer Center’s Intelligence Project at Harvard Kennedy School (HKS). “As a citizen, I’d much prefer the A team be in these positions….”

Goldsmith said, “It’s very hard to know” why Trump would make so many late personnel changes. He may plan to take some military action that Esper had resisted, or he may want to reveal classified information that could damage the intelligence community. But Trump can lawfully do all of those things regardless of who oversees the Defense Department or the intelligence agencies, even if those actions jeopardize U.S. national security. And given the many “imminent constitutional crises” that fizzled out during Trump’s presidency, Goldsmith suspects these firings probably won’t amount to much ultimately.

“I don’t see this as a precursor to a military coup,” said Goldsmith, who worked in the George W. Bush administration and is a co-founder of Lawfare, a national security blog. “It is hard to exaggerate how much the Defense Department is culturally averse to being involved in homeland or domestic law enforcement. It’s just not as easy as you’d think by looking at the organizational chart to have the military rolling out in the streets.”

It’s hard to dislodge a strongman, but when he does lose power, it feels like a “psychological annihilation. They can’t imagine not being in power.”
— Ruth Ben-Ghiat, author of “Strongmen: Mussolini to the Present”

But Trump’s narrative that the election has been stolen can be a propaganda gift to America’s leading adversaries. “Russia in particular, but also China, are both kind of rubbing their hands with glee and schadenfreude, using the president’s own words that could have been written in an active-measures workshop in Russia undermining global confidence and U.S. confidence in the electoral system and in democracy,” he said.

Trump may not be orchestrating a coup as such, but his actions reflect a pattern common at the end of authoritarian regimes, said Ruth Ben-Ghiat, a professor of history and Italian studies at New York University and author of the new book, “Strongmen: Mussolini to the Present.” It’s hard to dislodge a strongman, but when he does lose power, it feels like a “psychological annihilation,” said Ben-Ghiat. “They can’t imagine not being in power. They’re very destructive. And so, even if [Trump] goes, he’s going to try to sabotage the new administration as much as possible,” she said. “Most [strongmen] meet a bad end because they’re the last to know that everybody’s against them because they’re in their cocoon.”

What Trump intends to do with the nation’s intelligence before his term ends is potentially worrisome. Legally, the president determines what material should remain classified and what should not, so he may reveal anything he wants. And Trump has disclosed sensitive U.S. intelligence before, discussing a planned Islamic State operation with Russian officials in the Oval Office in 2017, talking in great detail about how U.S. military killed ISIS leader Abu Bakr al-Baghdadi in 2019, and telling Washington Post reporter Bob Woodward about a new nuclear weapons system earlier this year.

But Kolbe, the ex-CIA senior official, says even if Trump directs his new national security hires to hide or destroy intelligence materials, it would be “extraordinarily difficult” for them to accomplish because the systems in place create records of every action. More concerning is if they misuse the materials or use them in a way that harms intelligence sources and methods. Should Trump declassify highly sensitive materials simply to serve his own political agenda, “it could get a lot worse. There’s a lot of damage that could be done, intentionally or as collateral damage,” he said.

Installing loyalists unfamiliar with the vast, complex controls of the Pentagon also leaves the country vulnerable to foreign actors who may see the U.S. as weak or unprepared and want to take this opportunity to test U.S. national security, as they often do during presidential transitions, said Kolbe.

“I’d be concerned about ISIS or al-Qaeda operationalizing terrorist attack plans. I’d be looking at Ukraine; I’d be looking at [the] South China Sea, areas where you might see provocative actions that could result in an unintended clash,” he said.

But it’s back here at home, not overseas, where the deepest trouble could be brewing. 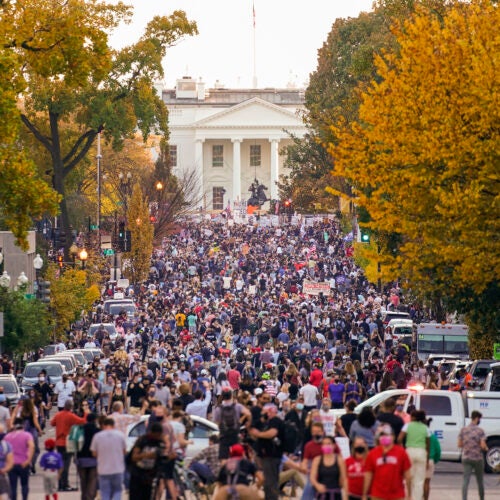 How much change is possible? In handling of pandemic? Economy? Health care? Equity?

“I think the real problem is that [Trump is] furthering the divides, exacerbating extremists, between far right-wing extremists, QAnon types, militias, etc., who may come out of the woodwork,” said Kolbe.

“The types of seeds that he’s planting, the types of extremism that he’s bringing out, the rejection of [our] constitutional process is going to play out for a long time. People are going to go away firmly believing that this election was rigged and it was unconstitutional, and will feel justified taking unconstitutional and/or violent actions in response,” he said. Once Biden takes office, the current foreign policy concerns will get handled, “but the domestic issues are going to be much harder to resolve.”

Though Article II of the U.S. Constitution gives presidents significant license to act unilaterally, some top officials have been unwilling to follow Trump’s orders throughout his term in office.

“We’ve never had an administration where senior officials were so defiant” of the president, said Goldsmith. Former cabinet members, including Defense Secretary Gen. Jim Mattis, Attorney General Jeff Sessions, White House Counsel Don McGahn, and White House Chief of Staff John Kelly, among others, either ignored or refused to carry out some of the president’s directives, according to reports. Some resigned, while others were forced out, as a result. “There are ways to slow roll this stuff, and that’s, I expect, what’s going to be going on in the next six weeks.”

For many national security professionals, the hope is that if the country can get through the next two months without incident, the approaching administrative changeover will return them to blissful political obscurity.

“On Jan. 20th, he will cease being president. Joe Biden will become president, and you’ll see some very fresh winds blowing in Washington. A lot of people who have been hunkered down, just holding their breath, getting on with keeping the nation safe, will breathe a big sigh of relief, and then go right back to doing that,” Kolbe said.