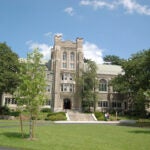 Graduate research will range from theater direction to criminal justice

Six Harvard College seniors have been awarded 2020 Rhodes Scholarships and a senior and recent alum were named George J. Mitchell Scholars. The research interests of the eight range from imperialism and economics to criminal justice and theater direction.

Harvard’s American Rhodes Scholars now number 375, and this year’s honorees will begin their studies at Oxford University in October. Mitchell winners will begin their graduate study at Queen’s University Belfast and The Lir Academy at Trinity College Dublin in September.

As a reporter for The Crimson and now its managing editor, Avi-Yonah is already a formidable force as a journalist and editor. She helped break stories on sexual harassment, workplace abuse, and racism. Some coverage led to legal threats and even a subpoena, which prompted her interest on the limits of legal protections for the press. It’s a topic she plans to focus on at Oxford, where she’ll compare the libel laws of the U.S. and the United Kingdom.

“I’m a believer in studying the historical roots of problems you seek to change, and I hope examining the origins of limits to press freedom will allow me to pursue a career working to defend it,” Avi-Yonah said.

Avi-Yonah got the news on the Rhodes Saturday afternoon while sitting in her parents’ basement. “After several minutes sitting in shock, I went upstairs to tell my parents and brother, call my aunts, and email the many, many people without whom I could not have gotten to this point,” said the Dunster House resident. “I think they were similarly shocked and excited!”

Chen spent four years focusing on the past as a history concentrator, but she always had an eye on the present. During the COVID-19 pandemic, the California native and two friends created Dear Loneliness, a global letter-writing campaign to help people assuage the isolation brought on by the COVID-19 pandemic.

Chen is no stranger to loneliness herself. Growing up with a single mother, she moved seven times between five cities and was constantly searching for a community. A nationally recognized poet and artist, Chen found a home among fellow creative souls.

“When I started writing poetry and meeting other artists, I found myself opening up,” she wrote in a brief piece on the Dear Loneliness website. “The warmth of this community has stayed with me.”

At Harvard, Chen expanded her communities to include friends and classmates in the departments of History and Economics (where she is pursuing a secondary concentration). She also connected her academic work to life beyond the classroom, conducting archival research on descendants of enslaved people. She served as editor in chief of the Harvard Economics Review and worked with a research team that provided data to the International Monetary Fund on the economic impact of COVID-19 in African countries.

“I research economic inequality and how communities recover from conflict and historical atrocities, and I’m excited to continue this research at Oxford. I also hope to work with and help in domestic violence shelters in England,” said Chen. “Receiving the scholarship in this moment of history reminds me of our responsibility for others. I hope the research we conduct can help our communities in this time of need.”

Chen plans to pursue a master’s in economic and social history at Oxford, building on these experiences and opening the door for more engagement with the past and the future.

In keeping with his Harvard concentration, DeVaughn plans to pursue a degree in history at Oxford, focusing on the travels of Frederick Douglass, Ida B. Wells, and Malcolm X in the United Kingdom, the political philosophies they brought with them, and the insights into American racism they gained while abroad.

Each of these figures “knew that if we are to combat racial injustices at home, we actually might be able to find answers elsewhere,” DeVaughn said. “I’m very interested in researching their journeys to the U.K. and how they let Black suffering speak through their rhetoric on Civil Rights. I think the Civil Rights issue of today is criminal justice, and I’m going to learn how they tackled these issues in their time, but to also begin to think about how I can do it in my own time.”

For his senior thesis, DeVaughn is studying the political theory and practice of another influential African American leader: Shirley Chisholm, who became the first Black woman elected to U.S. Congress in 1968. His research builds on the history of American education and incarceration systems as well as on-the-ground policy work in the offices of two California Democrats, Sen. Kamala Harris, who is now Vice-president Elect, and Gov. Gavin Newsom.

“Both inside and outside the classroom, I think about questions of justice, and how we cater to ‘the least of these,’ as it says in the Bible,” he said. “My father was incarcerated for the first 13 years of my life, and where I come from, so many people are not provided adequate education and [end up in] the criminal justice system. I feel driven to not only fight for equity in that system, but in all the systems to which it is tied.”

Hampton was watching a European soccer match on Saturday, hoping for his phone to ring. “They said, ‘If you get it, we’ll call you. If you don’t get it, we’ll send you an email,” Hampton said. An email never came, but the call did. He sat with the good news a few hours before telling his mother and grandparents.

“It’s just really humbling, and it makes one think about the structure of their lives,” said Hampton, a former Eliot House resident.

Hampton spent much of his time at Harvard inside the booth at WHRB and later as its president (2018 to 2019), honing his leadership skills. He interned for the Democratic Caucus of the U.S. House of Representatives and is currently a staff aide for a board member of the Fairfax County Public Schools.

Hampton plans to study economics at Queen’s University Belfast in Northern Ireland next year. “This is an important way in which we help others,” he said, adding that he would like to look more into labor regulation, labor law, or financial regulations. When he returns to the U.S., he will study at Harvard Law School.

Nchinda-Pungong’s academic journey has been all about blending old passions with new ones. His lifelong love of engineering led him to pursue biomedical engineering as an undergrad, but his recent discovery of sociology will propel him in new directions at Oxford.

“When I came to College, I had been doing engineering since I was 7 or 8. Growing up I had weird questions about society and politics, but I literally didn’t even know what sociology was until I got to Harvard,” he said. “I’ve really appreciated the last four years because it’s been an incredible experience to first learn about fields like sociology that I didn’t know existed beforehand, and then actually get passionate about them.”

The Rhodes winner is grateful for all those who helped him with mock interviews and potential research questions. So far, he’s sent thank-you notes to more than 20 people.

“At the end of the day, you see a Rhodes scholar, and it’s one person,” he said. “But behind that [person] there is an army of people who helped in ways big and small. I’m incredibly grateful.”

Nesbitt was in the middle of packing to move home when she found out she’d been named a Mitchell Scholar. The first person she told was her grandmother, who was standing right next to her.

“My grandma was even more excited than me,” Nesbitt said. “My grandma is 82 — 81, I think — and she was jumping up and down, which I’ve never seen her doing ever. That definitely heightened my excitement, and I felt it was a good culmination of my Harvard experience.”

At Harvard, Nesbitt used her acting, music, and directing skills to turn a spotlight on social justice. She is co-president of BlackCAST, the Harvard Black Community & Student Theater Group, and helps organize the annual Black Playwrights Festival. In her sophomore year, Nesbitt helped relaunch KeyChange, the a capella group focused on performing music from the African Diaspora. After the pandemic lockdown, she also directed one of the first Harvard plays performed on Zoom in June, helping raise around $10,000 to support organizations related to Black Lives Matter and COVID-19.

As the former inclusivity chair of the Harvard Black Student Association, Nesbitt is seen as a leader on campus. She helped steer dialogue within the Black student community and forged partnerships with other campus groups for students of color to promote diversity on campus.

Nesbitt will study theater directing at The Lir Academy at Trinity College Dublin.

“A lot of Irish theatre and Irish art is based off of a legacy of colonialism and a focus on identity-making in the wake of a very deeply colonized location,” she said. “I’m excited to learn how they parse through it in terms of theater and how they perform the greater effects of colonialism and then use that to influence my work.”

Srinivasan was never more thankful for the mute button than on Saturday evening when the next group of Rhodes Scholars were announced in a Zoom meeting of finalists.

“It was a very nerve-wracking and long few hours [of waiting for the news],” she said. “I immediately started crying and screaming when they started saying my name. Thankfully, I was on mute. I think I blacked out.”

Srinivasan, a joint concentrator in social studies and history and science, quickly recovered and began calling her parents, friends, and mentors to share the news and thank them for their support.

At Oxford, Srinivasan plans to work toward two master’s degrees: international health and comparative social policy. These paths build on her Harvard studies and integrate her twin interests in medicine and social inequalities.

“Medical crises [like COVID, the opioid epidemic, and HIV/AIDS] are the product of social, political, and economic phenomena,” she said. “When we think about how to solve them, we have to think about socioeconomic barriers to health care access and the distribution of medical solutions.”

Zibell plans to pursue an M.Phil. degree in economic and social history at Oxford. It’s a fitting program for the Alaskan, who has spent his undergrad years studying the effects of colonialism and imperialism on the preservation and revitalization of global languages and literature. For his senior thesis, Zibell is analyzing comparative elements of imperialism in Yiddish literature and Inupiat poetry.

“Ultimately, my goal is to benefit anti-colonial struggles and struggles for self-determination, and I think language revitalization is a key part of that,” said Zibell, who is currently living in Adams House.

Literature is but one of Zibell’s passions. He has also been involved with labor organizing and educational development since high school, when he served on the central committee of the Alaska Association of Student Governments and on the State Board of Education and Early Development. At Harvard, Zibell worked as an undergraduate organizer with the Harvard Graduate Student Union. He has remained committed to community organizing, working on COVID-19 outreach with his tribal association this summer.

“I really have to give all of the credit for this to the fact that I was raised in a very caring community in [my] village,” he said. “Everyone has to look out for everyone else there, because of sheer necessity. My work will only be valuable inasmuch as I can benefit people who come from places like mine, both in Alaska and around the world.”