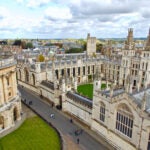 Guido Goldman’s began his service to Harvard by pulling in one of the biggest political names of his time. As a graduate student, the Zurich-born Goldman worked with Henry Kissinger ’50, A.M. ’51, Ph.D. ’54, to establish the German Research Center. From then until 1994, Goldman and Professor Stanley Hoffman helmed the center as its founding director, steering it as it became the Program on Western Studies, the Center for European Studies (CES), and finally the Minda de Gunzburg Center for European Studies — this at the same time he taught as a senior lecturer in government and, later, the center’s director of the Program for the Study of Germany.

Goldman died Nov. 30 at age 83. He left behind an indelible mark on Harvard and the field of European studies, having forged enduring partnerships between Germany and the U.S. that continue to foster trans-Atlantic interchange and understanding.

Goldman’s contributions to public life in the United States were prodigious. As a young man, he was the primary force behind establishing the German Marshall Fund (GMF), an institution dedicated to improving trans-Atlantic understanding. It was Goldman’s initiative that led German Chancellor Willy Brandt to announce a major foundational gift to the GMF and a significant endowment for CES at Harvard’s Commencement on June 5, 1972, the 25th anniversary of the Marshall Plan. Guido served the GMF for 40 years as the founding chair of its board, a period during which he was also an important contributor to German-American relations and a board member of the American Council on Germany, the Council on Foreign Relations, and the Atlantic Council of the United States. In 1978, he was awarded the Commander’s Cross of the Order of Merit by the Federal Republic of Germany for his “contributions towards fostering German-American relations.”

Goldman also made many contributions to Harvard. Over four decades he helped raise more than $75 million for the University, including multiple endowments for European studies. In 1967, he helped establish the prestigious John F. Kennedy Memorial Fellowships and served as the program’s first director. In 1974, he secured a major gift from the Krupp Foundation for an endowed professorship in European studies, the first at Harvard to incorporate funding for graduate fellowships. In 1986, when Harvard was reconsidering usage of Adolphus Busch Hall, Goldman stewarded a generous donation from the de Gunzburg family to renovate the building as the new home for CES and establish an endowment for it. In 1990, Goldman helped negotiate an agreement through which the German government established three Centers of Excellence for German and European Studies at Harvard University, Georgetown University, and University of California, Berkeley. He was also instrumental in raising funds for the McCloy Program at Harvard Kennedy School and for the construction of Otto Werner Hall, an addition to the Fogg Museum that housed Harvard’s collection of expressionist art.

In May 2018, Harvard awarded Goldman the Centennial Medal, the Graduate School of Arts and Sciences’ highest honor, for his “lifelong commitment to promoting international peace and prosperity” and “decades of impeccable leadership of the Center for European Studies and service” to his alma mater.

Goldman was also a major supporter of the arts, serving for many years on the board and as vice chair of the Alvin Ailey American Dance Theater, and helping organize the Dance2Bfit program to fight obesity in primary schools. As the founder of the American Foundation for Textile Art, he assembled and curated the world’s finest collection of Central Asian Ikat art, for which he was elected to the Academy of Sciences of Uzbekistan in 1998.  After sponsoring many exhibitions of these textiles in twelve American and European museums, in 2005 he donated the bulk of his collection to the Arthur M. Sackler Gallery in Washington, D.C. The catalog of his Ikat collection was given the George Wittenborn Memorial Award in 1997.

A memorial service to celebrate Goldman’s life and work will be planned as soon as it is possible to convene in person.