Debate tips for Biden and Trump 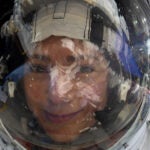 Parachuting into a pandemic after historic spacewalk

The first presidential debate was a chaotic night filled with shouting, name-calling, and cross talk that left many voters reaching for their remotes. But despite the fireworks, a trio of Harvard voice and movement experts kept watching to assess the performances of President Trump and former Vice President and Democratic nominee Joe Biden and suggest ways to improve performance. Thursday’s debate begins at 9 p.m. and will be broadcast from Belmont University in Nashville, Tenn., on all major broadcast and cable outlets.

Trump: Keep quiet, think, listen, and “abide by the rules.”

Biden: Stay on point, cut down on the nasty comments, and “talk to the American people more.”

Throughout the debate both candidates maintained a steady vocal register that served them well, said North. Trump’s was “sort of loud and one-note,” while Biden’s was much calmer. “He did raise his voice once when he pointed his finger at Trump and got really upset, but most of the time he really stayed within that range of sort of quiet, calm.”

North said Biden’s occasional stilted replies to Trump’s verbal barrage highlighted something important. “When [Biden] stumbles and trips up over a word on stage in that kind of high-pressure situation, you really have to cut him some slack,” she said. “This is not mental acuity. This is part of his stutter.”

During the event Biden, who opened up in February about his lifelong struggle with a stutter, could also be seen frequently blinking or closing his eyes, a physical tic North suspects is related to his speech. “When he gets stuck a little bit for a second he’ll close his eyes. And that looks to me like it’s a little bit of a secondary characteristic [connected to stuttering] because he’s struggling to get a word out.”

When it comes to body language, North considers finger-pointing verboten. “[It’s] a very aggressive gesture,” said North, who instructs her students to avoid it at all costs. Instead, she prefers the “Clinton thumb,” a favorite of Biden’s and of its namesake, President Bill Clinton, in which the user presses their thumb against the middle joint of their index finger that is part of a closed fist. (Trump often opts for making a kind of OK circle by joining together his forefinger and his thumb.)

Trump: Turn toward the camera and opponent more, and reach out to the people “physically, and with eye contact.”

Zohn was immediately struck by the candidates’ postures as each took his place on the debate stage. Trump was holding onto the dais with his arms “ramrod straight,” she said; by contrast, “Biden was standing with his arms by his sides, or maybe they were resting on the podium more relaxed.” As a result, Trump appeared to be “full of tension,” said Zohn, while Biden seemed to be saying “I’m here, I’m open, and I’m relaxed.”

For Zohn, Trump’s cocked head and “pursed-lip scowl” was off-putting, whereas Biden’s laughs and smiles suggested of a kind of bemusement and “emotional range.” Zohn said Biden also made an emotional connection with the viewers. “He looked directly into the camera and actually talked to the people. At some point … it was almost like he was reaching out toward the people who were watching, and Trump did nothing of the sort.”

Zohn also noticed key differences in their body language. When addressing the president directly, Biden often turned to look at Trump, she said. When Trump engaged with Biden he kept his body facing forward, cocking his head up and turning it slightly to the left. Trump’s posture projects arrogance, said Zohn, and implies “I’m the one with the power here, and you’re sort of beneath me.”

Head of voice and speech at the American Repertory Theater

Bailey said Trump’s efforts to “steamroll with sound” appeared to be working until an exasperated Biden bluntly told the president of the United States to “shut up.”

“I thought something shifted there,” said Bailey, who is also a professional dialect coach.” It’s not that [Biden] was able to answer everything super smoothly after that, but I feel like he stopped being as rattled. He does this thing when he’s trying to fix the phrasing, he closes his eyes a little bit. … And [after that moment] I felt like that was happening less.”

Bailey said Trump is a better impromptu and physical speaker who uses hand gestures, as well phrasing and accentuation, more effectively than Biden. “What [Trump’s] saying, and how it’s organized, isn’t particularly strong. But there’s a particular word that gets lifted, and that makes it make a little more sense.”

During the debate Biden’s rehearsed lines fell flat, said Bailey, because he failed to accentuate key words. “There were a couple times that happened where clearly something that had been worked on just didn’t get the oomph it needed.”