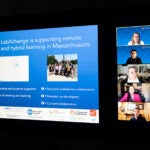 Octopuses have captured the human imagination for centuries, inspiring sagas of sea monsters from Scandinavian kraken legends to TV’s “Voyage to the Bottom of the Sea” and, most recently, Netflix’s less-threatening “My Octopus Teacher.” With their eight suction-cup covered arms, their very appearance is unique, and their ability to use those appendages to touch and taste while foraging further sets them apart.

In fact scientists have wondered for decades how those arms, or more specifically the suction cups on them, do their work, prompting a number of experiments into the biomechanics. But very few have studied what is happening on a molecular level. In a new report, Harvard researchers got a glimpse into how the nervous system in the octopus’ arms (which operate largely independently from its centralized brain) manage this feat. The work published Thursday in Cell.

The scientists identified a novel family of sensors in the first layer of cells inside the suction cups that have adapted to react and detect molecules that don’t dissolve well in water. The research suggests these sensors, called chemotactile receptors, use these molecules to help the animal figure out what it’s touching and whether that object is prey.

“We think because the molecules do not solubilize well, they could, for instance, be found on the surface of octopuses’ prey and [whatever the animals touch],” said Nicholas Bellono, an assistant professor of molecular and cellular biology and the study’s senior author. “So, when the octopus touches a rock versus a crab, now its arm knows, ‘OK, I’m touching a crab [because] I know there’s not only touch but there’s also this sort of taste.’”

In addition, scientists found diversity in what the receptors responded to and the signals they then transmitted to the cell and nervous systems.

“We think that this is important because it could facilitate complexity in what the octopus senses and also how it can process a range of signals using its semi-autonomous arm nervous system to produce complex behaviors,” Bellono said.

The scientists believe this research can help uncover similar receptor systems in other cephalopods, the invertebrate family that also includes squids and cuttlefish. The hope is to determine how these systems work on a molecular level and answer some relatively unexplored questions about how these creatures’ capabilities evolved to suit their environment.

“Not much is known about marine chemotactile behavior and with this receptor family as a model system, we can now study which signals are important for the animal and how they can be encoded,” said Lena van Giesen, a postdoctoral fellow in the Bellono Lab and lead author of the paper. “These insights into protein evolution and signal coding go far beyond just cephalopods.”

Along with Giesen, other co-authors from the lab include Peter B. Kilian, an animal technician, and Corey A.H. Allard, a postdoctoral fellow.

“The strategies they have evolved in order to solve problems in their environment are unique to them and that inspires a great deal of interest from both scientists and non-scientists alike,” Kilian said. “People are drawn to octopuses and other cephalopods because they are wildly different from most other animals.”

The team set out to uncover how the receptors are able to sense chemicals and detect signals in what they touch, like an arm around a snail, to help them make choices.

Octopus arms are distinct and complex. About two-thirds of an octopus’s neurons are located in their arms. Because the arms operate partially independently from the brain, if one is severed it can still reach for, identify, and grasp items.

“People are drawn to octopuses and other cephalopods because they are wildly different from most other animals.”
— Peter B. Kilian

The team started by identifying which cells in the suckers actually do the detecting. After isolating and cloning the touch and chemical receptors, they inserted them in frog eggs and in human cell lines to study their function in isolation. Nothing like these receptors exists in frog or human cells, so the cells act essentially like closed vessels for the study of these receptors.

The researchers then exposed those cells to molecules such as extracts from octopus prey and others items to which these receptors are known to react. Some test subjects were water-soluble, like salts, sugars, amino acids; others do not dissolve well and are not typically considered of interest by aquatic animals. Surprisingly, only the poorly soluble molecules activated the receptors.

Researchers then went back to the octopuses in their lab to see whether they too responded to those molecules by putting those same extracts on the floors of their tanks. They found the only odorants the octopuses receptors responded to were a non-dissolving class of naturally occurring chemicals known as terpenoid molecules.

“[The octopus] was highly responsive to only the part of the floor that had the molecule infused,” Bellono said. This led the researchers to believe that the receptors they identified pick up on these types of molecules and help the octopus distinguish what it’s touching. “With the semi-autonomous nervous system, it can quickly make this decision: ‘Do I contract and grab this crab or keep searching?’”

While the study provides a molecular explanation for this aquatic touch-taste sensation in octopuses through their chemotactile receptors, the researchers suggest further study is needed, given that a great number of unknown natural compounds could also stimulate these receptors to mediate complex behaviors.

“We’re now trying to look at other natural molecules that these animals might detect,” Bellono said.