From one Nobel laureate to another 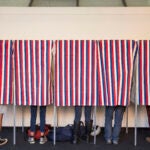 Pulled to the polls

It was a toast from one Nobel laureate to another, sweetened by the pride of a mentor to a prized student.

When Jennifer Doudna Ph.D. ’89 was honored on Wednesday with the Nobel Prize in chemistry for her work on the CRISPR gene-editing technique, she became the second person to gain such an honor from the lab of Jack Szostak, a genetics professor at Harvard Medical School and Massachusetts General Hospital, and professor of chemistry and chemical biology at Harvard’s Faculty of Arts and Sciences.

Szostak, who won the Nobel Prize in physiology or medicine in 2009 for work on how telomere caps keep the body’s chromosomes from breaking down, advised Doudna’s doctoral work on RNA and on Wednesday raised a glass in honor of Doudna, now at the University of California, Berkeley. In a tweet, Szostak expressed his delight at seeing someone he once guided through her early scientific steps soar to science’s highest reaches:

"You were always a star… The only thing better winning the #NobelPrize yourself is having one of your former students win it!" – Jack Szostak, Jennifer's mentor for her Ph.D. work @Harvard pic.twitter.com/UJzUNVRyku

Doudna received the prize together with Emmanuelle Charpentier, for their work discovering and developing CRISPR as a precise gene-editing tool. In just the eight years since the pair announced their discovery the use of the technique has rapidly spread to a host of fields, allowing researchers to alter the code of life and develop resistant crops, new medical therapies, and even anticipate curing inherited diseases.