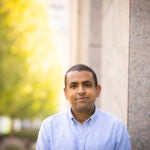 Nine scientists from Harvard are among the 85 who have been selected in four categories to receive $251 million in grants over five years through the National Institutes of Health’s High-Risk, High-Reward Research Program, which aims to promote innovative studies addressing major challenges in the biomedical, behavioral, or social sciences.

Christopher D. Harvey, associate professor of neurobiology, will receive the NIH Director’s Pioneer Award, given to researchers with outstanding records for innovation. He is among 10 awardees.

Harvey’s lab works to understand how the mammalian brain performs the computations that underlie cognitive functions, including decision-making, short-term memory, and spatial navigation, at the level of the fundamental building blocks of the nervous system, cell types and neural populations organized into circuits.

Andrew C. Kruse, associate professor of biological chemistry and molecular pharmacology at Harvard Medical School (HMS), and Debora S. Marks, assistant professor of systems biology at HMS, will receive a Transformative Research Award. The award promotes interdisciplinary approaches that could potentially create or challenge existing paradigms. The two, who are among nine winners in the category, are attempting to use machine learning to engineer yeast-based monoclonal antibodies.

Lee is pursuing an important but understudied area of human genomic research known as retrotransposons, which may be a significant source of immunogenic molecules in aging and diseased human tissues. Miller is looking at the cause and eﬀect of how molecular circuitry governs information processing and decision-making in multicellular systems, which has been a major goal in systems biology. And Hekstra is studying the physical and mechanical properties of proteins.

“Our vision is to be able to systematically map the effective physical and mechanical properties of proteins by electric-field-stimulated X-ray crystallography, by pushing and pulling on atoms and seeing their response,” he said. “Ultimately, we hope to understand how proteins work and how their evolution is shaped by their physics.”

Hyunghoon Cho, a Schmidt Fellow at the Broad Institute of MIT and Harvard; Sarah J. Hill ’05, M.D. ’10, Ph.D. ’14, assistant professor of radiation oncology at HMS and associate pathologist at Brigham and Women’s Hospital; and Waring Trible, a Distinguished Science Fellow in the FAS Center for Systems Biology, will receive Early Independence Awards. The award spotlights scientists who have recently received their doctoral degrees or completed their medical residencies and moved directly into independent research positions. They are among 13 winners.

Cho’s research focuses on broadening data-sharing and collaboration in biomedical research by developing secure methods for sharing and analyzing sensitive data from individuals. Hill’s lab focuses on understanding how defects in DNA damage repair contribute to ovarian cancer. And Trible will look to produce an integrative study on the development of caste in ants and, in general, help explain the mechanisms and evolution of animal development.

“Beyond just teaching us about ants, knowledge of these mechanisms could help us to understand epigenetic processes relevant to human health and agriculture, like cellular differentiation, diet and obesity, and the response of our global ecology to a changing environment,” Trible said.

“The breadth of innovative science put forth by the 2020 cohort of early career and seasoned investigators is impressive and inspiring,” said NIH Director Francis S. Collins. “I am confident that their work will propel biomedical and behavioral research and lead to improvements in human health.”