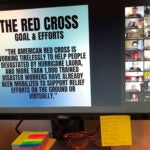 Inspired to action, eager to serve

Through ingenuity and flexibility, Anna and Myungin Lee were able to make the most of their time as students

Myungin Lee is taking a little longer than many students do to finish his degree. He began at Harvard in the fall of 2015 and will graduate at the end of this semester, five and a half years later, with a concentration in Computer Science, having already landed and begun a full-time job at a tech startup.

His older sister took even a bit longer. Anna Lee graduated in spring 2020 with a degree in Comparative Literature, seven years after entering as a first-year in the fall of 2013. She continues to play the violin professionally.

The length of their University careers might suggest the siblings, who are a year and a half apart in age, wavered in finding a direction. But a closer look shows just the opposite: Both figured out fairly quickly where they wanted to end up, but the paths to get there veered back and forth between the classroom and the world.

Take Anna. Her talent as a violinist became clear very early on — she gave her first professional concert with the Singapore Symphony Orchestra at age six. Still her parents, father Hwawon Lee and mother Jungho Park, were surprised when her instructor, the orchestra’s concertmaster, suggested they move to another city where there would be greater opportunities.

“When a teacher is impressed with their pupil, they don’t usually want to push their students out,” Park recalls thinking. But the concertmaster was insistent, and the family decided to move to New York where Anna could study at Juilliard, which had already offered her admission.

Lee left his job at the global logistics firm DHL, and the family of four arrived in New York City in fall of 2002. The transition was difficult. Lee had trouble finding work and the couple felt alone at times. “Even when we managed to meet Koreans, they seemed different from us because they had been living in the U.S. for years already,” Park said. But the children seemed happy, she said, and eventually things became easier.

Anna’s intense training schedule dictated a lot of the family’s life. Because of this, Anna and Myungin were unlikely to be seen apart: Myungin tagged along to nearly all violin lessons, festivals, and competitions. Rather than feel resentful or jealous, Myungin quickly noticed a pattern: “Every time I followed my sister, good things would happen. I would go to nice places, eat good food. I always tried to maximize tagging along.”

Myungin also began studying a string instrument; he remembers falling in love with the timbre and sound of the cello. He began to study in earnest but could see that playing was different for him than for his sister. “Seeing my sister — the way she practices — made me realize that I wasn’t cut from the same cloth for a professional performance career,” he said.

The two attended the same elementary and middle schools during the day, with minimal time apart at after-school musical training, she at Juilliard’s Pre-College program, and he at Manhattan School of Music’s Pre-College Division. In high school they chose to attend different day schools, as well, in response to their diverging interests. Myungin found himself drawn to pursuits outside of cello like basketball, football, and performing in a school musical.

When it became time for Anna to start applying to colleges, many assumed that she would pursue conservatory. But after 11 years at Juilliard, she was feeling a bit restless, and though she knew she would continue to play, she yearned to expand her horizons. She just wasn’t sure how it would work out.

“At the time, I didn’t know a single musician who had successfully made it through a liberal arts school and stuck to a rigorous performance schedule,” she recalls thinking. “Except for Yo-Yo Ma.” (An example that didn’t necessarily bring much comfort.)

Still her mother encouraged her to stretch herself and continue to pursue both school and performance. When contemplating where to apply, Anna thought of a visit to Harvard’s campus, when she was in Boston for music. “I stepped out of the T in Harvard Square and immediately loved the energy. Tons of people were playing music, selling art. Younger people were playing chess against older people at Au Bon Pain. It felt ripe for new opportunities.”

By the time Anna began Harvard in September 2013, it was clear that her education couldn’t follow a traditional schedule of eight consecutive semesters.

“Many people, when they found out I was going to attend a liberal arts college instead of a conservatory, asked if I was going to quit violin.” Quitting hadn’t crossed Anna’s mind, but she knew she would indeed need to split her time. So, after one semester at Harvard that included an intensive German language course, she relocated to Kronberg, Germany, to study with renowned teacher Ana Chumachenco and begin a two-and-a-half-year stint of focusing exclusively on music. “I knew Harvard would be there in a couple years — but opportunities in the music world wouldn’t be, even in the next month.”

“Seeing my sister — the way she practices — made me realize that I wasn’t cut from the same cloth for a professional performance career.”
— Myungin Lee

While Anna was on leave, Myungin entered Harvard in September 2015. Aside from inheriting a few of Anna’s friends from Canaday F who took him under their wings, Myungin had the campus to himself and a fresh start. He chose courses in Mechanical Engineering and Philosophy and spent time in Annenberg, on the intramural fields, and in friends’ dorm rooms getting to know his classmates.

Anna wasn’t surprised by the ease of his transition. “I always thought my brother was the more popular and people-oriented one of us,” she said. “He’s effortlessly fun to be around. He draws people to him because they can be playful around him.”

As Myungin pursued his interests in both the humanities and STEM, he began teaching himself to code, using Codecademy and Khan Academy, free online resources. This growing interest in coding led his sights outside the classroom, to tech startups. In his first exposure to a startup, he worked adjacently to coders, “seeing iterations being made in real time as I asked for new features. Bugs being fixed. I saw the beauty of building.”

It was during Myungin’s third semester, fall of 2016, that he and Anna would first be at Harvard at the same time. Though Anna was older, she was now a semester behind Myungin in school. Throughout the semester, the two met for meals in Lowell House, where Myungin lived, and studied in Lamont together, especially Lamont Café where Myungin worked as a barista and made a mean chai latte. They even got the chance to take a chamber music performance course and play together (a rarity in their lives) at their December performance/final exam.

The 2017-2018 academic year proved to be the time the two most overlapped on campus. With the peers from her 2017 social class graduated, Anna began spending more time with Myungin’s friends, and consequently at her brother’s most beloved spot on campus: Lowell House. “I don’t think I could have gone through Harvard without Caitlin,” Myungin says of Caitlin Casey, Lowell’s Allston Burr Resident Dean. And the House loved him back: After Faculty Deans Diana Eck and Dorothy Austin (or “D&D” as both siblings know them) began consistently inviting him to play for High Table, he brought along Anna, who eventually transferred to Lowell.

House Administrator Beth Terry developed a special fondness for the two: “Watching them in the dining hall together or with friends, it was like a family sitcom.” While she uses different adjectives to describe the two — Anna as “intelligent, empathetic, and sophisticated,” and Myungin as “clever, highly personable, and self-effacing” — she believes “they have both affected each other very much.”

Unlike his sister, Myungin didn’t enter Harvard with the plan to take time away from campus. His interest in coding led his sights outside the classroom to tech startups. He credits Anna with warming his parents up to the idea of a leave of absence. His first leave occurred during the spring of 2017 when he co-founded and led business and product initiatives for Duo AI, a company that develops advanced AI systems for homes. After completing four more semesters, he took a leave again in fall 2019 to lead product and growth at Squarelink, an access and security tool for blockchain apps. And it eventually brought him to his present job at Niche, which seeks to make the search for high-quality education accessible, better informed, and ultimately free.

When Anna finally graduated in May, she did so amidst the pandemic, which forced the cancellation of musical festivals worldwide. She then found herself at her parents’ home in New York, a change from the travel-packed schedule she’s used to. “It’s the longest stretch of time I’ve stayed in one country since I was 15 years old,” she says.

Anna has concerts booked for 2021 and 2022 and is curious to see how the music industry will adapt to the post-COVID world — as well as how the pandemic will change her own trajectory. “COVID has definitely flipped things a lot,” she said. “My dream of performing and teaching hasn’t changed, but the way of getting there has changed.”

That kind of flexibility and willingness to embrace new opportunities will continue to serve both siblings well.