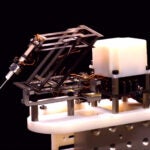 Cutting surgical robots down to size

May deliver drugs in a sustained way, potentially reducing treatment to a once-a-day dose

A newly developed synthetic lining that coats the small intestine may have potential to treat conditions, ranging from lactose intolerance to diabetes and obesity, according to investigators from Harvard-affiliated Brigham and Women’s Hospital (BWH) and the Massachusetts Institute of Technology.

A team of researchers has been working on an innovative way of sustainably delivering drugs and influencing nutrient absorption in the gut by using the gastrointestinal synthetic epithelial lining (GSEL) system. Because GSEL is designed to coat the small intestine, an organ that plays a key role in drug and nutrient absorption, researchers have demonstrated the GSEL system’s ability to adhere to segments of the gastrointestinal tract from pigs and humans. In pig models, the team has reported potential applications in treating not only diabetes, but tropical diseases such as schistosomiasis.

Results of the team’s proof-of-concept studies are published in Science Translational Medicine.

“The small intestine is an amazing organ — it’s the main site of drug and nutrient absorption and digestion and plays an important role as a barrier. We recognized its potential: If we could specifically target this location, it would open up new avenues for drug delivery and nutritional modulation,” said corresponding author C. Giovanni Traverso, a gastroenterologist and biomedical engineer in the Division of Gastroenterology at the Brigham.

The GSEL system combines two nature-inspired innovations. The first takes advantage of a chemical reaction triggered by catalase, an enzyme that helps break down hydrogen peroxide into oxygen in the small intestine. The second is a mussel-inspired tissue adhesive, similar to what mollusks use to attach themselves to rocks. Using these two concepts, Traverso, first author Junwei Li, and colleagues designed the synthetic gut lining. Their goal is to develop a capsule, pill or gel that could be ingested, but for now, the team has tested administering the GSEL system endoscopically — that is, directly inserting it into the small intestine.

To test the lining’s therapeutic potential, the team looked at pig models for testing lactose intolerance, glucose absorption and the delivery of praziquantel, a drug for treating schistosomiasis. The team found evidence that the lining could deliver the drug in a sustained way, potentially reducing treatment to a once-a-day dose instead of three time a day. It also improved lactose digestion and regulated glucose absorption, indicating its potential for treating Type 2 diabetes and preventing obesity.

In order to move from pig models into human trials, several hurdles remain, including further developing the GSEL system into an ingestible form. For now, Traverso, Li and colleagues are focused on continuing to evaluate safety in preclinical studies.

“For our studies, safety is a key focus of our work,” said Traverso. “There are indications that this system can help patients suffering from many diseases, but before we can translate this technology for humans, we need to fully validate its safety and the effects of chronic use.”

This work was supported by the Bill and Melinda Gates Foundation grants (OPP1179091), the NIH (EB000244) and funds from the Department of Mechanical Engineering, MIT.

Adapted from a Brigham and Women’s news release by Haley Bridger.