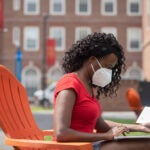 By Center for African Studies Communications

Walter Charles Carrington ’52, J.D. ’55, passed away on Aug. 11 at the age of 90. Carrington was a former U.S. ambassador to Senegal and Nigeria and civil rights activist.

Carrington, who came to Harvard College in 1948, was one of four Black students accepted. He founded the first Harvard chapter of the NAACP while he was president of the Harvard Society for Minority Rights. In addition, he was leader of the Liberal Union and a Class Marshal. Carrington’s years at  Harvard were also highlighted by a debate with Malcom X and befriending the Rev. Martin Luther King Jr. Throughout the years, Carrington remained close to Harvard, including his relationship with the Center for African Studies.

Carrington was a distinguished American diplomat who served as the U.S. ambassador to Senegal at the end of the Carter administration (1980-81) and as President Clinton’s ambassador to Nigeria (1993-97).

Before his foreign service career, he had vast experience working on the African continent through his career in the Peace Corps, which brought him to Tunisia, Senegal, and Sierra Leone from 1961 to 1971. After the Peace Corps, Carrington held the position of executive vice president of the Africa-American Institute from 1971 to 1980.

“Walter Omowale Carrington was of that breed that provokes the time-honored, nostalgic sentiment, a cliché that is however grounded in unvarnished truth: ‘They don’t make them like that anymore.’”

“Erin Wo, ‘the elephant has fallen’ as we will say in Yoruba Nigerian culture where Ambassador Carrington was given the name Omowale (this child has come home) in recognition of his return to Nigeria as an African American and Ambassador. But more significantly, it was to recognize his many contributions to the country he loved so much. His finesse, gentle, humble and sincere life became reference point to many who knew him. Our students here at Harvard who attend the ‘Nigeria and the world seminar,’ which Carrington never missed, saw him as a benevolent grandfather and role model worth emulating. May his place of rest be a blessed one. He will be surely missed by all of us.”

“Walter embodied the very best in the Black pioneers in the Harvard student body: he was wise, thoughtful, elegant, possessed of a penetrating intellect and a deep determination to fight racism and help other Black people gain access to opportunities, such as admission to Harvard, that racist practices historically limited. He was something of a hero to me, a living embodiment of traditions of intellectual excellence and service in the African American community during segregation that one only reads about.”

Carrington also held various positions in academia. He was named director of the Department of International Affairs at Howard University and also taught at Marquette University, Massachusetts Institute of Technology, Simmons College, and Washington College. He was appointed as a fellow of Harvard University’s W.E.B. Du Bois Institute as well as a MacArthur Fellow.

“His presence will be deeply missed at Harvard and beyond. We share our heartfelt condolences to Ambassador Carrington’s wife, Arese, their children, close family, and friends,” the Center for African Studies announced in a statement.

Carrington was born in New York City on July 24, 1930, and grew up in Everett, Mass. In addition to his wife, Arese, he leaves behind his son, Thomas Carrington of D.C., and daughter, Temisan Oyowe Carrington of Newton, Mass., as well as two grandchildren. Arrangements are being handled by J.S. Waterman Langone Chapel.