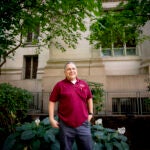 Stories from faculty, students, staff about writing’s place in a pandemic

Just before the start of the pandemic, Harvard juniors Suuba and Sadia Demby were in Sierra Leone, capping off a two-year project and reconnecting with their family’s roots.

The twin sisters traveled there in mid-December to deliver copies of a widely-recognized sourcebook on infectious disease to some of the country’s health professionals. The gift was originally intended to support the ongoing recovery from the 2014 Ebola outbreak, which devastated the West African nation, and to be used as a tool to help control or mitigate the spread of any future outbreak.

“It’s really hard to motivate people to think you need to try anticipate what’s coming next, so the fact that we were able to get people engaged during that time was really meaningful,” said Sadia, who is concentrating in social anthropology and global health and health policy. “We had no idea the next pandemic would be along right after we left.”

The Demby twins were inspired by their father, a doctor and public health expert who specializes in Ebola and had made multiple trips to Sierra Leone to combat the virus. The sisters wanted to contribute to the recovery there because it’s where their family is from.

They raised $10,000 over two years through crowdsourcing, social media campaigns, and going door-to-door pitching their cause. After negotiating a price with the APHA, they purchased 200 copies of the text and coordinated with the ministry of health in Sierra Leone to make sure the books would reach those who could make a difference. In December, the twins presented the ministry with the books at an event that included some of the nation’s leading medical figures, like the deputy minister of health.

As part of the trip, the twins also organized a donation of 480 backpacks and three laptops to their father’s ancestral village, Gerihun, and sponsored a youth soccer match there. The young women provided the players 32 cleats donated by Harvard students and one of their uncle, Cyrus.

At the end of the two-week journey, the twins spent time getting to know relatives they’d never met before and learning about their family history.

“It was great to be able to do our productive and impactful service aspect of the trip, but then it was also great being able to see the place where our parents grew up and to see family members that we had heard some stories of but never had the opportunity to meet in person,” Suuba said. “It was pretty amazing to see the origins of our names.”

Under normal circumstances, David Damrosch would have spent this summer traveling for lectures and conferences, including the Institute for World Literature in Belgrade, Serbia, and as an invited lecturer at the University of Tokyo. His schedule looks very different now as he stays home in Brooklyn, N.Y., but Damrosch has found a unique way to share those loves on his new blog, “Around the World in 80 Books.”

Damrosch, Ernest Bernbaum Professor of Comparative Literature and director of the Institute for World Literature, started the 16-week project May 10. Loosely modeled after the itinerary of Phileas Fogg, the protagonist of Jules Verne’s novel “Around the World in 80 Days,” the global journey starts and ends in London and travels through Paris, Cairo, and Rio de Janeiro, as well as more personal stops in Bar Harbor, Maine, where Damrosch was born, and New York, where he was raised and still lives.

Every weekday, he writes a blog post ranging from 1,000 to 1,600 words about a book set in or associated with a particular location. Recent entries include pieces on the hyper-local appeal of Virginia Woolf’s “Mrs. Dalloway” (London) and the blend of memoir and fiction in post-Holocaust literature as seen in Primo Levi’s “The Periodic Table” (Krakow).

Damrosch has read most of the books on the list, but there are some he is picking up for the first time, like Donna Leon’s 2014 Venice-set mystery novel, “By its Cover,” for Florence-Venice week. And he has changed some titles based on feedback from readers, like when a commenter from Pakistan asked him to include Rabindranath Tagore in the “Kolkata” section.

“With a blog format, you do get into responses from readers, and I like this kind of interactive aspect you can get in the blogosphere,” he said, noting that he has received requests from readers to translate the posts into Arabic, Chinese, German, Romanian, Turkish, and Ukrainian.

“It is just a very different mode of writing; more conversational, more informal, and an experiment for me to see what kind of balance to strike between the personal and the literary critical,” said Damrosch. “Literature shows us one way to get out of our tendency toward isolation, which is as much a national as it is a COVID-related problem today.”

For better, for verse

Harvard Library’s Woodberry Poetry Room strives to be a space that fosters community — even now, when community must be at a distance. Its latest endeavor is a poetry exchange, pairing more than 70 Boston-area poets to create new relationships and writing partnerships.

Forced to cancel public programming due to the pandemic, curator Christina Davis said the poetry room also lost the opportunity to connect with the Greater Boston poetry community. She was determined that, instead of losing connections altogether, they build new ones virtually.

“We realized that many poets in our community were isolated due to COVID-19,” Davis said. “While poets are often perceived as solitary, we are also what [Romanian-French poet] Paul Celan once called solidary. Our capacity for truth and vulnerability makes us immensely sensitized to the needs and experiences of others.”

Davis knew many Boston-area poets would have no outlet for their solidary selves — and perhaps less writing inspiration, as well. Her solution was the informal poetry exchange, which she announced in late May on the poetry room website. Within 24 hours, she had received dozens of responses from poets around and beyond Boston. Respondents were of all ages and backgrounds, from award-winning poets to self-described amateurs, students to retirees.

In June, participants received an email introducing them to their “Boston poetry pen pal.” As for what the partnership entails, that was left open to interpretation.

“We believed it was important to emphasize process over product,” Davis said. “We know that people are immensely stressed at this time (financially, medically, interpersonally) and we didn’t want to add to their burden.”

They did offer the pairs suggestions, however, including: writing about a mutually inspiring quote or topic; working with a poetry form that lends itself to collaboration; and translating a poem together.

Davis said the Poetry Room hopes to virtually convene participants at the end of the summer to share poems as well as experiences with the exchange.

“We’ve already received a few very moving responses,” she said, “suggesting that the pairings have proved to be generative and joyful.”

Life under COVID-19 led to the first livestreamed event from Dumbarton Oaks in Washington, D.C.

The Harvard institute, which supports research in Byzantine, Pre-Columbian, and garden and landscape studies, hosted soprano Renée Fleming for an Aug. 1 recital in the historic Music Room as part of the Metropolitan Opera’s virtual series “Met Stars Live in Concert.” The series features performances in unexpected places around the world including the Fundació Hospital de la Santa Creu i Sant Pau in Barcelona and on a mountaintop in Èze, France.

Before Fleming could perform the program, which included some of her favorite arias by Puccini and Massenet, as well as pieces by Handel and Korngold, the nearly 100-year-old room had to be prepped for its digital debut.

“The Music Room is not a stage set. You cannot put filters on the lights, and you cannot move the tapestries around,” said Dumbarton Oaks Executive Director Yota Batsaki, adding that entry to the building was tightly monitored and a staff member was stationed by the fire alarm in case it went off during the performance.

The Music Room, one five gallery spaces in the museum, is normally the site of annual public lectures, symposia, and the Friends of Music at Dumbarton Oaks chamber music concert series. It boasts two 16th-century marble arches and a 16th-century French chimneypiece, as well as Renaissance sculptures and tapestries. All of the art had to be moved or protected while staff brought in lights, speakers, and microphones for Fleming and her accompanist, pianist Robert Ainsley.

Dumbarton Oaks has been closed to the public since March due to the pandemic and normally does not host outside events, said Thomas B.F. Cummins, interim director and Dumbarton Oaks Professor of the History of Pre-Columbian and Colonial Art in the Department of the History of Art and Architecture. But the “extraordinary circumstances” of the pandemic motivated their decision to partner with the Met.

“It was something that everybody willingly signed on to and they did their work extraordinarily well. It was invigorating at a time when things don’t seem very good” in the world of the arts, he said.