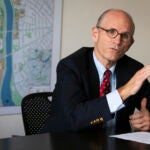 By mid-summer, many younger children had had enough of Zoom. But in the last week of July, first-grader Gabriella Cedrone couldn’t wait to log on to the computer every day for Creative Drama — Space Explorers, a free, weeklong summer camp put on by the American Repertory Theater and Harvard Ed Portal.

Local first-and second-grade students spent the week learning about theater techniques and the actor’s toolkit, rehearsing, and then performing the children’s story “The Three Little Aliens and the Big Bad Robot.” To help set the scene, each camper received a free Space Explorers kit filled with supplies for the performance.

“Her favorite part was putting the arts and crafts together and, as a parent, my favorite part was seeing how confident she was in sharing what she made and learned,” said Gabriella’s mother, Brighton resident Erika Cedrone. “Just opening the bag that corresponded to the daily lesson was like opening a surprise gift each day. … The fact that the box was brought to our house really spoke to the love and care that was put into each box and into the program itself.”

“Planning for virtual arts programming requires a huge leap of imagination — in some ways, the entire situation feels like an exercise in make-believe,” said Alpern. “We are programming virtual programs for virtual people in a virtual world from our virtual home offices. It feels very surreal.”

Brown said one advantage of the shift was being able to reach participants who otherwise might have not been able to attend.

A.R.T. Education and Engagement Director Brenna Nicely said that knowing students would be burnt out from online learning, her team worked hard to design activities that would keep students interested.

“We consciously designed a program where we changed gears and topics consistently, provided options for tactile experiences that didn’t require screen time, and built in ample opportunity for role-playing and creative design,” she said.

“Arts programs always bring students together and make space for imagination,” said Brown. “Since reality is especially heavy right now, we wanted to create a virtual setting that makes up for the students’ isolation and boredom.”

Elly Cheung’s favorite part of the program was being able to share the final performance with an audience. That and the kit.

“The kit was very organized and easy enough for first graders to follow,” said her parent, Angel Chen. “She loves arts and crafts, so seeing the kit brought a smile to her face.”

A.R.T. teaching artist Alissa Cordeiro said the kids took to virtual learning much more easily than many adults do, and an unexpected benefit of the digital program was being able to mute the students to cut down on distractions.

But she added that remote theater isn’t the same as the real thing.

“Anyone who does theater will tell you that Zoom theater is the Splenda of theater — it’s fine, but it’s also clearly not sugar,” said Cordeiro. “There was a collaborative sense that was lost as it can only be created in-person, so that was sad to miss out on.” Despite the format’s limitations, though, “[We could] still use our bodies, faces, and voices to create a theatrical experience that will look extra dramatic on camera.”

Erika Cedrone said that Cordeiro’s teaching style contributed to much of the program’s success.

“Alissa did an amazing job keeping the kids entertained and focused all week. Her hard work really shined at the final performance, where each of the children was engaged and participating,” said Cedrone. “It was a great way to pull all of their weekly activities and projects together in one cohesive story sharing experience.”

Nicely said that adapting the program for online presented several challenges, including finding ways to build connections between the students.

“Our creative thinking as educators and artists helped us along the way while designing an engaging virtual program, as did our focus on the creative process and connection to storytelling,” she said. “I was struck by how often we could make a direct translation between an in-person classroom norm and a virtual classroom norm.”

Staff at both the Ed Portal and the A.R.T. said they enjoyed working with each other.

“The A.R.T. was the perfect partner for this program,” said Alpern. “Smart, creative, and classy, they bring years of expertise shaking up conventional spaces. If anyone could figure out how to teach live performance to 6-year-olds on Zoom, it is the A.R.T.”

“Working with the Ed Portal is always a pleasure, and always a true partnership, whether we are working with the arts team, operations team, or public school partnerships,” said Nicely. “The clarity of mission that the Ed Portal team brings to their work, always prioritizing Allston-Brighton and its families, combined with the balance of content knowledge, creativity, and support, makes them fabulous collaborators.”