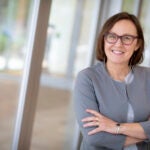 The dream of suspended animation has long captivated the human imagination, reflected in countless works of mythology and fiction, from King Arthur and Sleeping Beauty to Captain America and Han Solo. By effectively pausing time itself for an individual, a state of stasis promises to enable the repair of lethal injuries, prolong life and allow for travel to distant stars.

While suspended animation may seem a fantasy, a strikingly diverse array of life has already achieved a version of it. Through behaviors like hibernation, animals such as bears, frogs, and hummingbirds can survive harsh winters, droughts, food shortages and other extreme conditions by essentially entering into biological stasis, where metabolism, heart rate, and breathing slow to a crawl and body temperature drops.

Now, Harvard Medical School (HMS) neuroscientists have discovered a population of neurons in the hypothalamus that controls hibernation-like behavior, or torpor, in mice, revealing for the first time the neural circuits that regulate this state.

Reporting in Nature on June 11, the team demonstrated that when these neurons are stimulated, mice enter torpor and can be kept in that state for days. When the activity of these neurons is blocked, natural torpor is disrupted.

Another study published simultaneously in Nature by researchers from the University of Tsukuba in Japan also identified a similar population of neurons in the hypothalamus.

By better understanding these processes in mice and other animal models, the authors envision the possibility of one day working toward inducing torpor in humans — an achievement that could have a vast array of applications, such as preventing brain injury during stroke, enabling new treatments for metabolic diseases or even helping NASA send humans to Mars.

“The imagination runs wild when we think about the potential of hibernation-like states in humans. Could we really extend lifespan? Is this the way to send people to Mars?” said study co-lead author Sinisa Hrvatin, instructor in neurobiology in the Blavatnik Institute at HMS.

“To answer these questions, we must first study the fundamental biology of torpor and hibernation in animals,” Hrvatin said. “We and others are doing this — it is not science fiction.”

To reduce energy expenditure in times of scarcity, many animals enter a state of torpor. Hibernation is an extended seasonal form of this. Unlike sleep, torpor is associated with systemic physiological changes, particularly significant drops in body temperature and suppression of metabolic activity. While common in nature, the biological mechanisms that underlie torpor and hibernation are still poorly understood.

“The imagination runs wild when we think about the potential of hibernation-like states in humans. Could we really extend lifespan?”
— Sinisa Hrvatin

The role of the brain, in particular, has remained largely unknown, a question that drove the research efforts of Hrvatin and colleagues, including co-lead author Senmiao Sun, a graduate student in the Harvard Program in Neuroscience, and study senior author Michael Greenberg, the Nathan Marsh Pusey Professor and chair of the Department of Neurobiology in the Blavatnik Institute at HMS.

The researchers studied mice, which do not hibernate but experience bouts of torpor when food is scarce and temperatures are low. When housed at 22 C (72 F), fasting mice exhibited a sharp drop in core body temperature and significant reduction in metabolic rate and movement. In comparison, well-fed mice retained normal body temperatures.

As mice began to enter torpor, the team focused on a gene called Fos — previously shown by the Greenberg lab to be expressed in active neurons. Labeling the protein product of the Fos gene allowed them to identify which neurons are activated during the transition to torpor throughout the entire brain.

This approach revealed widespread neuronal activity, including in brain regions that regulate hunger, feeding, body temperature and many other functions. To see if brain activity was sufficient to trigger torpor, the team combined two techniques — FosTRAP and chemogenetics — to genetically tag neurons that are active during torpor. These neurons could then be re-stimulated later by adding a chemical compound.

The experiments confirmed that torpor could indeed be induced — even in well-fed mice — by re-stimulating neurons in this manner after the mice recovered from their initial bout of inactivity.

However, because the approach labeled neurons throughout the entire brain, the researchers worked to narrow in on the specific area that controls torpor. To do so, they designed a virus-based tool that they used to selectively activate neurons only at the site of injection.

Focusing on the hypothalamus, the region of the brain responsible for regulating body temperature, hunger, thirst, hormone secretion and other functions, the researchers carried out a series of painstaking experiments. They systematically injected 54 animals with minute amounts of the virus covering 226 different regions of the hypothalamus, then activated neurons only in the injected regions and looked for signs of torpor.

“A drop of a couple of degrees in humans leads to hypothermia and can be fatal. However, torpor circumvents this regulation and allows body temperatures to fall dramatically.”
— Senmiao Sun

“When the initial experiment worked, we knew we had something,” Greenberg said. “We gained control over torpor in these mice using FosTRAP, which allowed us to then identify the subset of cells that are involved in the process. It’s an elegant demonstration of how Fos can be used to study neuronal activity and behavioral states in the brain.”

Stimulating only these neurons was sufficient to induce rapid drops in body temperature and motor activity, key features of torpor. To confirm that these neurons are critical for torpor, the researchers used a separate virus-based tool to silence the activity of avMLPA-Vglut2 neurons. This prevented fasting mice from entering natural torpor, and in particular disrupted the associated decrease in core body temperature. In contrast, silencing these neurons in well-fed mice had no effect.

“In warm-blooded animals, body temperature is tightly regulated,” Sun said. “A drop of a couple of degrees in humans, for example, leads to hypothermia and can be fatal. However, torpor circumvents this regulation and allows body temperatures to fall dramatically. Studying torpor in mice helps us understand how this fascinating feature of warm-blooded animals might be manipulated through neural processes.”

The researchers caution that their experiments do not conclusively prove that one specific neuron type controls torpor, a complex behavior that likely involves many different cell types. By identifying the specific brain region and subset of neurons involved in the process, however, scientists now have a point of entry for efforts to better understand and control the state in mice and other animal models, the authors said.

They are now studying the long-term effects of torpor on mice, the roles of other populations of neurons and the underlying mechanisms and pathways that allow avMLPA neurons to regulate torpor.

“Our findings open the door to a new understanding of what torpor and hibernation are, and how they affect cells, the brain and the body,” Hrvatin said. “We can now rigorously study how animals enter and exit these states, identify the underlying biology, and think about applications in humans. This study represents one of the key steps of this journey.”

The implications of one day being able to induce torpor or hibernation in humans, if ever realized, are profound.

“It’s far too soon to say whether we could induce this type of state in a human, but it is a goal that could be worthwhile,” Greenberg said. “It could potentially lead to an understanding of suspended animation, metabolic control and possibly extended lifespan. Suspended animation in particular is a common theme in science fiction, and perhaps our ability to traverse the stars will someday depend on it.”