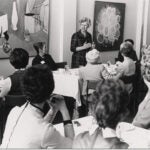 Growing up, Mahlet Shiferaw developed a love for drawing and was a huge fan of science fiction and fantasy genres, children’s classics like J.K. Rowling’s “Harry Potter” series and C.S. Lewis’ “Chronicles of Narnia,” and she was “obsessed with drawing unicorns.”

But her mother, who moved to the U.S. from Ethiopia after Shiferaw was born, wanted her to focus on more practical subjects. She encouraged her to branch out and try reading some nonfiction. Eventually, Shiferaw picked up a book about space, and then another, and found the topic just as fascinating as her science fiction favorites. She was hooked.

“My parents apparently always thought that I was going to be in the humanities and were surprised I stuck with STEM [Science, Technology, Engineering and Math],” said Shiferaw, who last month graduated from the College as a joint concentrator in astrophysics and physics, with a secondary in women, gender, and sexuality.

Since moving out of Eliot House in March, Shiferaw has been back home with her parents and younger sister in Roslindale, a neighborhood in southwest Boston. Her well-laid plans for the coming months were disrupted by the COVID-19 global pandemic, but over the past four years she’s gotten used to working through challenges.

Before College, Shiferaw’s goals were clear. In fact, her love for astronomy was so strong she wanted to share it with other young people of color. Throughout high school at Boston Latin School, Shiferaw mentored elementary- and middle-school aged girls who were interested in STEM as part of a Boston-area nonprofit, Science Club for Girls.

“[Physics] is what I was dead set on doing, and then I got to my classes, and I didn’t feel like I was meant to be there.”
— Mahlet Shiferaw '20

But she started to have doubts when she first arrived at Harvard and immersed herself in STEM courses, where she was one of the few women of color and sometimes the only African American woman in the room. She felt as though she was the one who could use a little mentoring.

“[Physics] is what I was dead set on doing, and then I got to my classes, and I didn’t feel like I was meant to be there,” she said. “So I had to seek out representation outside of class in order to gain the confidence back.”

Shiferaw found inspiration during her sophomore year at an event held by the Conferences for Undergraduate Women in Physics. There, she met a group of black women who were just a year or two older but were already publicly presenting their research.

With that encouragement, Shiferaw began to overcome feeling that she wasn’t good enough and to apply for a competitive Harvard summer grant program, Research Experience for Undergraduates (REU). She also enrolled in a Gen Ed course on gender and science that helped her find new perspective.

“Those two things my sophomore year helped get me to where I am today because I was able to quantify why I was feeling the way I was,” said Shiferaw. “It wasn’t because I was stupid or anything; it was systemic. It wasn’t my fault. I was just fine.”

One of only five students in the nation awarded a Universities Space Research Association scholarship for promising young scientists in late 2018, Shiferaw spent last summer at the California Institute of Technology studying higher-order modes of gravitational waves at its Laser-Interferometer Gravitational-wave Observatory.

Shiferaw had equally ambitious post-graduation plans before the COVID-19 outbreak. She had intended to spend July counseling high school students in Japan as part of a Boston volunteer program she’s long been involved with, but now she’ll do so virtually. In the fall, Shiferaw, who earned a citation in German at graduation, intended to begin a gap year studying gravitational waves at the Max Planck Institute for Gravitational Physics in Germany as a Fulbright scholar. The idea for her project emerged during her time at Caltech doing work she described as “mind-blowingly cool.” But the pandemic has delayed the program’s start until January, leaving her with some unaccustomed free time between now and then to work on her illustrations.

In fall 2021, Shiferaw will attend Stanford University, where she will pursue a Ph.D. in physics. And as she looks ahead to years of graduate study, she admits the prospect of feeling isolated or intellectually overlooked because of race and gender leaves her “terrified”: African Americans and women remain historically underrepresented in the field. But just by being there, Shiferaw believes she will help clear the path for others and make the field more diverse.

“There are so many horror stories, but I think I have to try either way,” she said. “I’m ready to accept whatever risk comes of it because I think it’s worth it to go after what I really want.

“Part of what made me want to [study astrophysics] was I was interested in the subject in high school, and then in College, realizing all the baggage I would have to deal with really turned me off at first, but then also gave me a reason to continue doing it,” Shiferaw said. “So I think I owe it to myself and girls in the future to keep going.”