Sibling on a mission 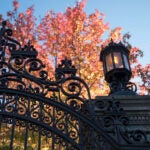 Six graduate and professional Schools to remain online for fall

A lot of what Nathan Grant did while at Harvard — and plans to do now — circles back to his twin brother, Nik.

“My brother has definitely surpassed that. He’s now 22,” said Grant, a Dunster House alumnus from Cincinnati. “There is a lot of research going on with this disease, and there’s a lot of answers in health care so people are living longer.”

Grant concentrated in molecular and cellular biology (MCB) to become part of finding those answers. “I wanted to learn more about the genetics of MPS and what can be done in terms of medicine,” he said.

But his focus is even wider. Having grown up seeing the toll diseases like MPS can take on a whole family, he’d also like to help improve the day-to-day management of such maladies and find ways to support families of those with cognitive and genetic disorders.

To that end, he spent much of his time at Harvard working on programs providing families with space to talk about their experiences and resources to support them.

“What I’m hoping to do is work in medicine to help patients as well as to help parents who are caregiving, to help siblings, to help the whole family through clinical practice but also through researching the support needs of families and different interventions that can be done,” said Grant, who also earned a secondary in social anthropology.

One way he’s done this has been through Siblings with a Mission, an organization he started to help siblings of people with disabilities. The website is a way for families to find resources on specific diseases, share experiences, and participate in conferences and workshops.

The group has almost 500 active members from 25 states and 15 countries. Members post stories online about issues such as the uncertainty of having a sibling suddenly land in the hospital, or what it’s like dating while having a sister with special needs, or reflections on the last days of a brother’s life. For their first in-person event in July 2017, they partnered with the Cincinnati Children’s Hospital Medical Center for a symposium that brought together more than 100 members and medical researchers.

“It’s been really special because siblings have come up to tell me that they didn’t really have a place where they could meet others who ‘got it,’ who really understood the experiences,” Grant said.

Grant started Siblings with a Mission in 2015, before he came to Harvard, but it didn’t take off until his first year in College, when he became more vocal about his experiences and desire to advocate for siblings, like him, who will eventually take over caregiving responsibilities.

“Our relationship is different,” Grant said. “Some of my friends talk more about sibling relationships being more about rivalry at a young age and trying to grow apart. For me, my brother’s needed as much help as he could get from all of us in the family. I’ve really taken more of a role to help him and provide care for him, which has made me stay so connected to him.”

However, he wouldn’t be much of a brother if there wasn’t at least some mischief, he admits.

“We still do fun activities,” Grant said. “We still go on Halloween for trick-or-treating — I like doing that a lot with him. We also really like going out to restaurants. That is his favorite: going out to eat. So that’s also part of my role: to restore some sense of normal sibling social activities for him that he doesn’t get from my parents. I like to do that when I come back home from College.”

While at Harvard, Grant used his education to help Nik.

“Using my story with Nik’s struggles … and using that to help other siblings, other families, or people who have similar struggles at home, that’s what’s been so rewarding to me.”
— Nathan Grant '20

“What has been most challenging in the past two years is that his behavioral issues [have been very] severe at times, so that’s causing me to be more involved [with his medical care],” Grant said. “I do a lot of research online, looking at what kinds of treatments have been possible for these kids and what has been done to help with some of their severe behaviors. My MCB classes and anthropology classes have helped me learn how to do those literature searches and look for medications, as well some possible outcomes.”

He still does it. “I was looking at medications, and I was talking to my mom about how the behavioral pharmacology class [I took] this semester taught me so many of the terms that I was reading in this paper about a medicine we’re looking into for Nik.”

Grant also uses what he learned in class to advocate for families like his by writing perspective pieces in medical journals. One in Molecular Genetics and Metabolism Reports focused on including more siblings in research on people with disabilities. Another in in the British Medical Journal focused on raising awareness of the experiences and needs of families caring for children with complex health conditions.

At Harvard, Grant helped start a program in which the Harvard Premedical Society invites people with a variety of diseases, their family members, doctors, and researchers to discuss what it’s like having the illness, caring for someone with it, and treating it. As part of the Harvard Undergraduates Raising Autism Awareness club, Grant helped put together Friday events that invited children and teenagers with autism to Harvard for social activities like movie nights and game nights.

“That’s something that’s allowed me to stay connected with people like my brother while I’m at School,” Grant said.

Next year, Grant plans to travel to the University of Cambridge’s Emmanuel College as a recipient of the 2020 Paul Williams Scholarship, a Harvard-U.K. fellowship. He hopes to continue some of the work he started here.

“Using my story with Nik’s struggles … and using that to help other siblings, other families, or people who have similar struggles at home, that’s what’s been so rewarding to me,” Grant said. “Instead of just feeling alone in my experiences with my brother, I’ve been able to connect with others who have the same experiences. I learn from their stories.”

There’s another person he learns a lot from, too — Nik.

“Nik teaches me a lot of positive life lessons,” Grant said. “Even though he has this rare disease, he’s still very, very happy and pushes each day [despite pain] to live life to the fullest.

“[I’ve learned] it’s always important to just enjoy the little things like how Nik enjoys getting toys, getting apples [which are his favorite food], and going to restaurants with us.”