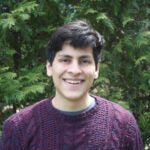 Birth of a sleuth

Marvin Merritt IV ’20 was born and raised on the small island of Deer Isle, Maine, where his mother’s family fished for generations and his father’s were relative newcomers, having arrived a mere half-century ago. It is the kind of place where residents tell stories, a few of which are mostly true and others less so.

Deer Island is the kind of place where it’s an oddity to meet a kid whose parents were raised in another state. When that happened to Merritt in high school, “I remember asking him, ‘Your parents didn’t have the same teachers you did?’ It was revolutionary to me that kids could have different teachers than their parents or relatives, and not all be from the same place. That’s how much I was a byproduct of this community,” where nobody seemed to leave.

The custom of spinning yarns inspired Merritt’s senior thesis project in Theater, Dance & Media (TDM). He created a two-character show called “Dear Deer Isle” that sent him on a journey back to his hometown in Penobscot Bay, population about 3,000, and helped him understand how it shaped his love of performance and his life.

“Artists have a history of telling stories with their art, and generational fishermen definitely know how to tell many stories that are mostly false, completely fabricated,” said the once-Leverett House resident. “I feel like it was a natural progression for me to get interested in this oral storytelling tradition. It was an odd marriage of these two communities.”

The production, which Merritt originally planned to stage on campus at Newell Boathouse with a team of student collaborators, was designed as a series of vignettes that cover the island’s history and Merritt’s relationship to it and the people he grew up with.

Merritt spent the summer before his senior year collecting stories about his childhood and the island from his mother, friends from high school, and neighbors, including “Grandma Tillie,” a centenarian resident who regaled him with tales about life on the island before a bridge to the mainland was built in 1939.

He also collected materials like lobster traps and archival documents about the island and its community to decorate the set for the short scenes, called études. In one, he projected his drawings of a fake “creation myth” of the island on a big screen. In another, he layered a recording of a Fourth of July celebration on the island underneath a monologue about his dual identity as “Harvard Marvin” and “Island Marvin.”

While developing the performance, Merritt reflected on his life and background. Other members of his family went their own way, though he is one of the few to leave the area. His parents’ career paths both diverged from their families’. His mother grew up on her father’s boat but now works at a chiropractic office. His father isn’t in the family jewelry business, but at Northern Light Blue Hill Hospital.

“The process of creating [‘Dear Deer Isle’] was healing [and] therapeutic,” he said. “It’s like going through all of the boxes that you’ve thrown things into, and really carefully examining and pulling out the valuable things, [because] the actual performance is not for me, it’s for the audience.”

“Dear Deer Isle” is a culmination of Merritt’s education in TDM and global theater. He studied the Stanislavski acting technique in Moscow and Shakespeare in London and performed in 16 shows at Harvard and off campus, including “The Danube” and “The Merchant of Venice.”

It’s also the next step in his already prolific acting career.

By the time he applied to Harvard, Merritt had acted for 10 years in community and professional productions, and was intent on pursuing theater as his livelihood. But his parents didn’t attend college, and he had few family members who had moved away from Maine, so his path forward was unclear.

He credited a mentor, Judith Keenan, for helping him see Harvard as a possibility, despite financial barriers, a small public high school with limited resources, and a family reluctant to see him go into the arts. Keenan is the widow of Edward “Ned” L. Keenan, Andrew W. Mellon Professor of History Emeritus at Harvard. She has lived on the island for years, and is involved in the town high school, where the two met.

“I would definitely not be here without her support, or at college [at all], so I owe her a lot,” said Merritt, noting that Keenan told him about the then-new TDM program during his senior year of high school and helped him with the entire application process.

Once on campus, Merritt found himself navigating unfamiliar territory, from class differences among students to the stimulus of living among so many other people for the first time.

“I had to teach myself to just shrink my scope, and [say to myself], ‘You don’t have to pay attention to every single person that walks by,’ but back home, you did,” he said. “I remember every single night going to bed completely exhausted, and it was literally my brain hurting because I was just trying to keep track of so much.”

Merritt was also part of one of the first cohorts of TDM concentrators in a still-new department. He was cast in a show his first semester, and from there became a fixture at performances and workshops around the department with peers and faculty.

“Theater is … a collaborative art form, and I am deeply excited by the collaborative nature of creating a piece of theater and having many, many hands and ideas and bodies contributing to the whole thing,” said Merritt, who noted that his original thesis plans included extensive collaborations with other TDM students, both onstage and behind the curtain.

Debra Levine, an instructor in TDM and Merritt’s thesis adviser, praised his commitment to the artistic community on campus.

“Marvin is one of those people who really understands that you have to be a generous collaborator in the theater, and I think that all of the TDM students look to him as someone who has just soared within the concentration,” said Levine.

Following the evacuation of campus in March, the plans Merritt had made for the thesis and his life after graduation were up in the air. Eventually, he submitted the work as a detailed script and critical paper, rather than a performance, and he plans to move to Berlin or Los Angeles after graduation to pursue acting.

“I can’t say it’s the most fulfilling conclusion to this situation, but it’s the smartest and safest choice,” said Merritt, speaking from his family home. “I really do think that at some point I will have the opportunity to put up the show, and I can look forward to that, but I’m not going to set a date.”

No matter where he goes next, this project has made it clear to him that he’ll always be an islander.

“It’s been oddly freeing” to return to Maine to create art, said Merritt. “Part of the process has been realizing that I don’t have to [live] there in order to still feel connected to the place.”