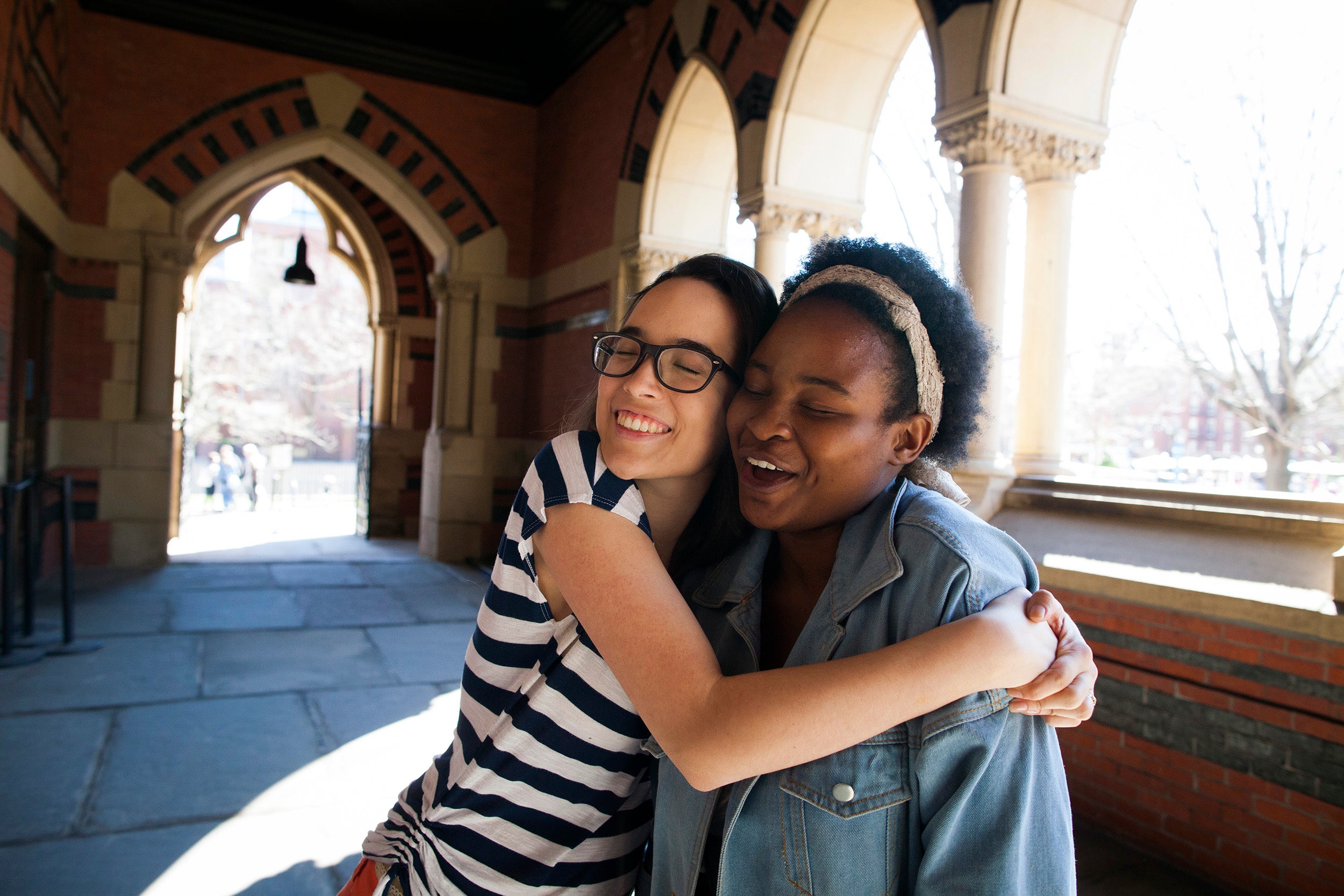 “When it was postponed due to the COVID-19 pandemic, I understood the necessity, but still was disappointed,” Scott said.

She had hoped to reunite with Kyle Robidoux, a visually impaired athlete she had previously guided along the marathon route and along other courses.

But the coronavirus proved to be no deterrent for the pair.

On April 20, the Boston marathon’s original date, Scott was nearly 800 miles from Massachusetts when she and Robidoux connected via cellphone. The two did a “virtual” run of 26.2 miles, with Robidoux circling a familiar track in Boston without a sighted guide, and Scott simultaneously running a track in Ann Arbor, Mich., where she soon will begin her emergency medicine residency at the University of Michigan Hospitals.

“We finished within five minutes of each other, celebrating by connecting in a FaceTime call,” said Scott.

To commemorate their achievement, Scott established an online fundraising page for Team With A Vision, which had brought Scott and Robidoux together in the first place. The group supports the Massachusetts Association for the Blind and Visually Impaired, a statewide network of services for low-vision individuals.

Scott is in an elite class of athletes called ultra-runners. She has been a top finisher in multiple 50- and 100-mile ultramarathons and has run several “Double Bostons,” in which runners complete the course twice on marathon day, totaling 52.4 miles.

Beginning early in the morning, the first feat is running the route in reverse, from Boston to the starting line in Hopkinton, then joining the throng of qualifying runners who head back to the Boston finish line.

Long-distance running isn’t Scott’s only outdoor passion. Raised in Bakersfield, Calif., near her family’s cattle ranch at the foothills of the Greenhorn Mountains, she grew up embracing the wilderness. She has summited Mount Kilimanjaro in Africa, as well as Mount Washington in New Hampshire, and several peaks in Washington state including Mount Rainier. But last summer, a climb in the northern Cascades with her brother, an experienced mountaineer, nearly ended in tragedy. While ascending Mount Stuart, a traction device on Scott’s footwear gave way and she fell hundreds of feet down a steep snowfield.

Fortunately, her fall was broken by a rock pile.

“When I finally stopped falling, it was a miracle I was still breathing,” she said.

When her brother was able to reach her, he found her with an ankle badly broken. Lying precariously at an elevation of nearly 10,000 feet, there was little chance of crawling to safety. Using their GPS tracker, they activated search-and-rescue officials in Seattle.

After a tense six hours, Scott was lifted by litter into a Navy helicopter and flown to Harborview Medical Center in Seattle. Greeting her on the helipad was her husband, John Scott, who previously finished a residency in general surgery at Brigham and Women’s Hospital and was now completing a fellowship in trauma surgery at Harborview — his last night on call for the year.

“I’d already decided to pursue a career in emergency medicine before this happened, but it really reinforced my desire to be equipped with the tools to provide hope and healing in critical situations,” Scott said.

Weeks after her accident, Scott learned she had been awarded the Emergency Medicine Residents’ Association “45 under 45” award, the only medical student in the country to receive that honor.

On May 28, when Scott receives her M.D. from HMS, it will be the third advanced degree she has earned since graduating in 2006 from University of California, Davis.

In 2007, she received a M.Phil. in public health from the University of Cambridge, England, focusing on modernizing public health systems in Bulgaria, followed by a Rotary Ambassadorial Scholarship to serve in Nicaragua, where she helped support rainwater harvesting projects and other innovations to relieve poverty.

In 2015, Scott received a Ph.D. in health policy from Harvard’s Graduate School of Arts and Sciences, concentrating on political analysis and global health quality. She subsequently served as a research fellow to the Minister of Health in Rwanda, an experience she describes as “nothing short of transformative.” Throughout medical school, she has returned to Rwanda nearly every year to visit her colleagues, most recently to attend the 2019 Women’s Leaders in Global Health in Kigali.

“The pandemic has created challenging times right now. Yet amid all this uncertainty, I cannot help but feel certain that every day is a gift. So let’s make the most of it.”
— Kirstin Woody Scott, M.D. '20

Looking back at her HMS education, Scott says her third year was particularly memorable. Preparing for a March 2019 site visit of the Liaison Committee on Medical Education (LCME), a reaccreditation review that occurs every eight years, the School’s administration recruited Scott to co-lead the team of students involved in the self-study process.

The team was responsible for creating and implementing a survey of the entire student body, designed to capture student satisfaction levels in various domains of the School. Achieving a 99 percent response rate, the group submitted a detailed report to the LCME and worked with HMS deans to develop action plans to improve satisfaction in several areas.

Impressed by Scott’s leadership at HMS, in her fourth year the LCME asked her to be one of only two student representatives on the national committee, an honor with full voting privileges. The 19-member committee, which includes medical school deans and senior faculty, meets three times a year, usually in Chicago, to review other medical schools’ reaccreditation reports.

In March 2020, when Scott was serving her final HMS clinical rotation in the emergency room, the COVID-19 crisis interrupted clinical duties. Refusing to stay idle, she stepped up to co-lead a team of HMS students in their response, which included creating a COVID-19 curriculum for medical students and providing support for vulnerable populations in Boston, such as the homeless and elderly.  She soon will join a class of 16 interns in emergency medicine at the University of Michigan, where her husband is on the faculty in trauma and critical care surgery.

Beyond her medical education interests, Scott was awarded the 2018 Samuel Katims Young Scholar in Humanism Award from the American College of Medical Quality and the 2019 American Medical Association Foundation’s Herman E. Diskin MD Memorial Physicians of Tomorrow Scholarship. At Harvard’s Honoring the Class of 2020 online ceremony this year, she will be among four graduating HMS students to receive the Massachusetts Medical Society’s Medical Student Scholar Award.

In September, Scott hopes to rejoin fellow runners in the Team With A Vision group to try to run the historic Boston Marathon one more time.

“The pandemic has created challenging times right now,” she said. “Yet amid all this uncertainty, I cannot help but feel certain that every day is a gift. So let’s make the most of it.”