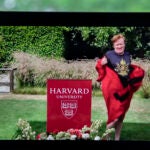 For Shanna Peeples, the GSE meant unexpectedly new relationships to words, work, and her own identity

Shanna Peeples was back in her home state of Texas. It was week eight of the COVID-19 quarantine and despite the circumstances, Peeples was feeling grateful.

After spending three years in the Doctor of Education Leadership (Ed.L.D.) program at the Harvard Graduate School of Education (HGSE), she had at last reached a milestone: Her final paper, all 25,240 words, was written, edited, revised, and uploaded to her adviser.

The paper was an interesting end to her time at Harvard. Although she had worked for years as an education reporter before spending 15 years teaching middle and high school students in Texas (and earning the honor of National Teacher of the Year in 2015), Peeples  had never really expected writing to continue to play such a major role in her graduate school life. Yes, there would be term papers to knock out and emails to answer; that was a given. But during her three years at the Ed School, she also managed to write content for “Pedagogy of the Obsessed,” the education podcast she started with a few other students in her program, and blog about current events. She even wrote and published a book for teachers, “Think Like Socrates: Using Questions to Invite Wonder and Empathy into the Classroom, Grades 4‒12.”

“That’s been the biggest surprise, how much I’ve leaned on writing while here,” Peeples says. “I guess, in a sense, writing becomes a pair of lungs. It is so much a part of me. Still, I didn’t think it was good enough, for want of a better term. When you’ve done something for so long, and you go to a place like Harvard, you think, now I need to step up my game. I’ve got to do something new and groundbreaking. For me, it was more of the same, but with different opportunities with the writing” — the blog, the podcast, and the book.

“If I think about the deepest part of what Harvard did for me … it gave me this integration of so many things and it let me write myself into more authenticity.”
— Shanna Peeples, Ed.L.D. '20

Writing also gave her the chance to synthesize the three areas that she has found her life consistently orbiting around: connecting through words, schools and learning, and social justice. Never was this more apparent than during the second year of her doctoral program, when she took a class at the Harvard Kennedy School with public policy lecturer Timothy Patrick McCarthy. McCarthy asked the class to write an op-ed. If they got it published, great, but the goal was to play around with advocating for something.

Peeples knew exactly what she wanted to write about. She had just finished co-teaching a section on gender and sexuality as a teaching fellow in one of Kay Merseth’s undergraduate education courses. While teaching the section, she did something she had never done before: She stood up in front of a group of students and identified herself as someone who is gay.

“Having a gay identity in the Texas panhandle was always something I had to hide and be quiet about,” she says. “I certainly couldn’t be out at all as a teacher. That was always something that was difficult for me as a teacher. I always felt like I was not being authentic, and being authentic was a deep value for me. I always felt like I was in my own way there.”

But sharing her truth to the undergraduates as a teacher in Merseth’s class changed everything.

“I wasn’t prepared for what that would do for me, and certainly not what it would do for these kids,” she says. “One of them came up to me after and said, ‘I’m a senior and you’re my first out teacher.’ That was really surprising to me. I had a very emotional experience with the students.”

“Having a gay identity in the Texas panhandle was always something I had to hide and be quiet about.”
— Shanna Peeples

She ended up interviewing four of the students who identified as gay, bisexual, queer, and transgender, and then wrote her op-ed for McCarthy’s class. Not wanting it to end there, Peeples decided to post “The Importance of an Out Teacher for LGBTQ Youth” last September on her Medium account, where it gained attention from educators from all over the world.

“That was the piece where all of this came together for me as far as an identity,” Peeples says. “That was amazing, and it continues to get hits. The people I’ve heard from, the teachers around the world who read it and said it helped them. There are so many places where that’s a dangerous thing: to be out and a teacher.”

Now back in Texas, Peeples is consulting with a number of schools on issues of equity and working with teachers who were also past teacher of the year winners at the national, state, and territory level — something she has done for the past four years. She is also thinking deeply about what’s next in our new virtual realities, and what this means for how we communicate, at work and in schools. And she is writing, for others — and herself.

“If I think about the deepest part of what Harvard did for me, and my time at Harvard, it gave me this integration of so many things and it let me write myself into more authenticity,” Peeples says. “It let me write myself into the courage to be who I am. It helped me do the one thing I couldn’t do in 15 years in a Texas classroom: be a role model for students, particularly queer students.”