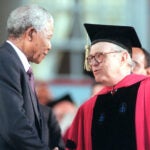 Martin Chávez ’85, S.M. ’85, an investment banker, computer scientist, and entrepreneur, has been elected president of Harvard University’s Board of Overseers for the 2020–21 academic year. Beth Karlan ’78, M.D. ’82, a physician and scientist with expertise in cancer genetics and women’s health, will serve as vice chair of the board’s executive committee.

Both elected as Overseers in 2015, Chávez and Karlan will serve in the board’s top leadership roles for the final year of their six-year terms. They succeed Michael Brown ’83, J.D. ’88, co-founder, past CEO, and now senior adviser of the public-service organization City Year, and Lesley Friedman Rosenthal ’86, J.D. ’89, chief operating officer and corporate secretary of The Juilliard School.

“Marty Chávez and Beth Karlan are widely admired leaders and deeply dedicated alumni,” said President Larry Bacow. “Marty’s expertise in technology and finance, and Beth’s expertise in biomedical research and health care promise to serve Harvard especially well in these challenging times. We are fortunate to have two such experienced and devoted Harvard citizens to lead the board. I look forward to working even more closely with both of them during the next academic year.”

The Board of Overseers is one of Harvard’s two governing boards, along with the President and Fellows, also known as the Corporation. The board directs the visitation process, the primary means for periodic external assessment of Harvard’s schools and departments. Through its array of standing committees, and the roughly 50 visiting committees that report to them, the board probes the quality of Harvard’s programs and assures that the University remains true to its charter as a place of learning. More generally, drawing on its members’ diverse experience and expertise, the board provides counsel to the University’s leadership on priorities, plans, and strategic initiatives. It also has the power of consent to certain actions, such as the election of Corporation members.

Chávez has built his career on using data, mathematics, software, and machine learning to solve complex problems for clients and others. He recently retired from Goldman Sachs, where he served in senior roles, including chief information officer, chief financial officer, and global co-head of the securities division, the firm’s largest operating unit. During nearly two decades at Goldman Sachs, where he remains a senior director, Chávez was also a member of the management committee, co-chair of the Americas Diversity Committee, and a leading member of the firm’s Hispanic/Latino and LGBT networks. This spring, he is a lecturer at the Stanford Graduate School of Business, teaching a course on “How Software Ate Finance.” Earlier in his career, Chávez was co-founder and CEO of Kiodex, a provider of digital risk-management tools, and co-founder and chief technology officer of Quorum Software Systems.

“It is an immense honor to be elected president of the Board of Overseers,” said Chávez. “Harvard transformed me and guided me from my roots in New Mexico to the worlds of finance, technology, bioscience, and academe from Wall Street to Silicon Valley. Under the extraordinary leadership of President Larry Bacow, and alongside the members of the governing boards, administration, faculty, students, and alumni, I will do my part to guide the University through and beyond this most challenging time.”

Chávez, who concentrated in biochemical sciences, received his A.B. from Harvard College in 1985 and concurrently earned a master’s degree in computer science. He went on to receive a Ph.D. in medical-information sciences from Stanford.

In addition to his Harvard Overseer service, Chávez is a member of the Stanford Medicine Board of Fellows, the board of trustees of the Institute for Advanced Study, and the board of directors of the Los Angeles Philharmonic. Previously, he served on the boards of Friends of the High Line, amfAR (the Foundation for AIDS Research), and the Santa Fe Opera, among other organizations.

Since retiring from Goldman Sachs, Chávez has served as an adviser and board member to multiple startups and projects, including the Digital Dollar Project, Paige, RealityEngines, and Recursion Pharma.

Beth Karlan is a distinguished physician-scientist at the University of California, Los Angeles, where she joined the faculty in 1989. A professor of obstetrics and gynecology at UCLA’s David Geffen School of Medicine, with special interests in heritable forms of cancer, she directs the cancer population genetics program at UCLA’s Jonsson Comprehensive Cancer Center. She is also vice chair of women’s health research in the Department of Obstetrics and Gynecology at the Geffen School. Until 2018, she was director of the Division of Gynecologic Oncology, director of the Women’s Cancer Program, and director of the Gilda Radner Hereditary Cancer Program at Cedars-Sinai Medical Center.

“In these unprecedented times, I’m honored to have the opportunity to work with Harvard’s leadership and my colleagues on the Board of Overseers to help identify innovative ways for Harvard to continue advancing its commitment to scholarship, leadership and education of the highest caliber,” said Karlan. “As a physician-scientist and caregiver, I bring my clinical experience and perspective to our discussions of strategies that support students’ personal transformation and promote their wellness — especially in the midst of this pandemic.”

As a Harvard Overseer, Karlan chairs the board’s standing committee on natural and applied sciences and additionally serves on the executive committee, the committee on Schools, the College, and continuing education, and the joint committee on alumni affairs and development. She is also member of the visiting committees for both Harvard Medical School and the Harvard T.H. Chan School of Public Health.

An authority on cancer genetics, with a focus on ovarian, breast, and other heritable cancers, she is the author or co-author of more than 300 publications, editor of several medical textbooks, and editor in chief of the journals Gynecologic Oncology and Gynecologic Oncology Reports.

An elected member of the National Academy of Medicine, Karlan serves on the National Cancer Advisory Board, chairs the scientific advisory committee of the Ovarian Cancer Research Alliance, and is past president of the Society of Gynecologic Oncology. Her work has been recognized with the National Cancer Institute’s Director’s Service Award and the OncLive Giants of Cancer Care award, among other honors.