Elevating people of color and women in the workplace 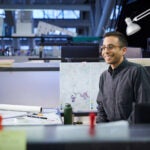 Deeneaus ‘D’ Polk, M.P.P. ’20, found his way from Mississippi to Harvard Kennedy School with plans to return to the South

Growing up in the small, blue-collar Mississippi town Pascagoula, Deeneaus Polk could not have predicted that his path would take him to Harvard Kennedy School (HKS). Or that it would run by way of Germany.

As the oldest of three children, Polk — who goes by “D” — was responsible for keeping an eye on his brother and sister while his mother worked multiple jobs to support the family. But in high school, he got the opportunity to move to Germany for his junior year and fell in love with the country, a world away from the American South.

“That experience changed my whole life,” Polk says. “I really think I’d be either dead or in prison had I not gone when I was in high school. It sent me on a trajectory of wanting to become an ambassador to Germany and wanting to do more for my community. But even more than all those things, it gave me a new lease on life.”

At first, Polk thought he would become a foreign service officer, and after completing community college in Mississippi and attending the University of Mississippi, he returned to Germany on a Fulbright Scholarship. But as much as he loved the country and the German people, he felt the pull of home.

“I got tired of being the only person in the room who looked and sounded like me,” Polk said, “so I decided to go back to Mississippi and try to impact my state. I decided to get into politics and policy.”

This interest eventually led Polk to the Kennedy School. Just as important as the hard skills he would learn in his classes, however, would be the people that he met on campus. Polk took part in activities that, he says, “really spoke to my heart.” He founded the Moderates Caucus to bring people together for thoughtful political discourse. He also served as a chair of the German American Conference and as a panel organizer for the Black Policy Conference.

But probably the most significant thing, Polk says, was his involvement with the Social Innovation + Change Initiative (SICI) as an Adrian Cheng Fellow. The Cheng Fellowship allowed Polk to delve into a social issue that he was passionate about: workforce development.

“I believe that when you have a trained and skilled workforce,” Polk says, “it brings about economic development in a community and ultimately creates the community development that we need to see — especially in places like Mississippi.”

Right now, Polk is using this knowledge and his SICI experience to create a startup called 3LEVATE “to build the workforce of the future — one that’s more equitable, more centered around people of color and women,” he says. Its aim is to bridge the skills gap and make the U.S. labor force more competitive.

“I’m just this small-town black man from Mississippi who somehow found his way to Harvard. And I really do believe that if I can do it, anyone else can do it.”
— Deeneaus Polk

After graduating, Polk plans on returning to Germany for a year through a Robert Bosch Fellowship. There he will continue his planning for 3LEVATE by studying the country’s apprenticeship model, which allows trainees to combine vocational training with on-the-job experience. He hopes to find German businesses willing to work with his startup, which he will pilot back in the United States, most likely in Birmingham, Ala. “I have a connection base there,” Polk says, “and my pilot would be centered on finding German companies and helping them build out a workforce in Birmingham through apprenticeship programs.”

Polk is uniquely placed for this project. “I know the German system well, and I know the United States, especially the South, and its workforce development system, so I think I can serve as a liaison between those different worlds.”

A program like 3LEVATE would potentially help people like Polk’s own brother, Desmond, who had been incarcerated while Polk was at the Kennedy School. (Polk and his brother wrote a paper about this experience and the carceral system for the Kennedy School Review).

Polk reflects on the challenging times he had at HKS — not only was his brother incarcerated, but his sister passed away this year. One thing that kept him going, though, was an outpouring of support from the Kennedy School community. He recalls people he hardly knew coming up and hugging him in the hallway. “I am totally grateful and indebted to this institution,” he says. “I’m just this small-town black man from Mississippi who somehow found his way to Harvard. And I really do believe that if I can do it, anyone else can do it. I look forward to being an ambassador for HKS as well, to help uplift whoever wants to come here and uplift communities.”

With graduation around the corner, Polk is thinking about his family. “This year they’ll all be online, cheering and rooting for me from home,” Polk says. “But I really, really want to thank my momma. She sacrificed so much to see me get to where I am today.”