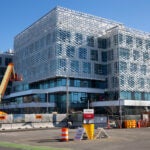 Lowell House Society of Russian Bell Ringers maintain their commitment to the history, tradition, and music — from a distance

Becoming a member of the Lowell House Society of Russian Bell Ringers requires perseverance, an affinity for heights, and the confidence to make mistakes very, very loudly.

Normally, members of the group, who include Harvard students, staff, alumni, and affiliates, ascend the Lowell House bell tower every Sunday for a 30-minute set of traditional Russian peals, Western classical music, and pop songs, played on 17 specially tuned bells that follow a Western scale. (Traditional Russian ones are not tuned to a series of notes and are instead played rhythmically.) The bells also ring out during Commencement, at the end of the Harvard-Yale football game, select Russian holidays, and at the stroke of midnight on Halloween.

After a two-year absence due to the extensive renovation at Lowell House, the bell ringers returned triumphantly to the tower last fall, ready to resume their role as the soundtrack to a Harvard weekend. But following the evacuation of campus due to the COVID-19 pandemic, the group developed a remote version of a tradition with a century of history across two continents.

Now, they meet on Zoom for weekly sessions organized by an assistant to the resident dean of Lowell House. Society members, alumni, and bell ringers from around the world gather to listen to archival recordings from past performances. Bell enthusiasts also watch short clips of ringings from earlier this year on Harvard’s social media accounts during the regular 1p.m. time slot on Sundays.

“The Zoom calls on Sundays are amazing because it allows us to interact with our history in a new way,” said Gavin Moulton ’20, president of the society. “It’s pretty great to be able to hear what people did in the past and see what we can aspire to, [and] because it’s digital, we get to interact with our global audience. I think that it’s just amazing to see that the bells are cared for by so many people, and I feel really lucky to be part of that community.”

DeSisto and Moulton plan to stay active in the society following graduation, in keeping with many other alumni who stop by the tower on visits to campus. They passed the leadership torch to incoming President Georgiy Kent ’22 and Vice President Austin Taylor ’21 last month, and both are excited to carry on the traditions that are beloved by so many in the Harvard community, even if it’s from a distance.

“Gavin and Isabelle have put the organization into a great position to continue working on building awareness about the bell ringers and also building up our repertoire,” said Kent, a joint concentrator in social studies and Slavic languages and literatures. He said that many students “don’t really hear about the bells, and we want to work on getting the word out there so that people can engage in this cultural exchange that is truly special and unique to Harvard.”

“Even though we don’t have access to the bells, all you really need is a piano keyboard” to practice Western songs and learn new peals, said Taylor, who is concentrating in chemistry and English. “Hopefully with the digital capabilities we have, we’ll be able to stay connected until we can be back physically in the tower again.”

In society tradition, the process of becoming a bell ringer is a lengthy one. Prospective ringers must attend the Sunday ringing sessions every week during each spring semester. These sets are open to the public, though only a limited number of visitors are allowed in the tower at once. The rest listen from the Lowell House courtyard, or while walking through Harvard Square.

“Often the weather isn’t really great in Cambridge, so … wind, rain, shine, blizzard, we’re up there in the tower,” said DeSisto, who is completing a bachelor’s degree in government and a master’s in regional studies in Russia, Eastern Europe, and Central Asia. “The most important part of the training is commitment, so that means that our ringers have to show that they’re committed to the organization and that they care about the group and are willing to come even in inclement weather.”

Before venturing into the bell tower to play the real thing, would-be society members also practice on six small bell replicas in the soundproof “Bell Gym” in Lowell’s basement, learn and recite the history of the bells after each Sunday ringing, and write a creative love letter to the bells.

“After a bell ringer has survived the winter, the final requirement is writing a letter [that is] collected in Lowell House scrapbooks and saved for posterity,” said Moulton, who concentrated in history of art and architecture and Near Eastern languages and civilizations. Examples of past letters include formal odes, but also poems and songs in English and Russian. “Our training process is unique in that it really centers on dedication, commitment to the group, and love for the culture and preservation of the bells.”

The society’s love of tradition and cultural preservation is bolstered by the longstanding connection between Harvard and the Danilov Monastery in Moscow, original home of the Lowell House bells.

In 1930, as the new Soviet government outlawed bell ringing and other forms of religious expression, plumbing magnate and philanthropist Charles Crane purchased the set from the monastery and gave the bells to Harvard as a gift; there, they were installed in the newly built Lowell House under the direction of University President Abbott Lawrence Lowell. Later, the 18th bell in the set was moved across the Charles River to Harvard Business School after a visiting Russian ringer named Konstantin Saradzhev declared that it did not belong in the House set. The bells were not tuned to any scale, and ringers stuck to traditional Russian peals.

In 2008, former Lowell House Faculty Deans Diana Eck and Dorothy Austin worked with a group from Harvard, the Danilov Monastery, and the nonprofit Link of Times Foundation to facilitate the bells’ return to Russia in exchange for a new set designed by Father Roman, the monastery’s chief bell ringer, and cast at the Vera Foundry in Voronezh, Russia. True to tradition, one bell was reinstalled at HBS, where it is rung on special occasions.

In order to continue fostering the cultural connection between the two places, Father Roman visits Harvard every few years to meet and train bell ringers, and society members travel to Russia every other year to tour sites of bell production and ringing. In February, Father Roman came to campus for two weeks and coached the ringers for their first full concert, featuring traditional peals, “10,000 Men of Harvard,” and the Lil Nas X hit “Old Town Road.” A planned August trip to Russia was canceled, but the incoming society leadership hopes to resume travel in 2021.

“There are obviously many political tensions between the American and the Russian governments, but I think our exchange is an example of people-to-people connections that can persist, regardless of the tensions that exist between these two governments,” said DeSisto, noting that the society is secular and nonpartisan.

She recalled visiting Russia with the bell ringers in her first year and witnessing a reverence for bell ringing while traveling with Father Roman and venturing into bell towers that few tourists get to see. The experience helped her develop a new appreciation for the art and its place in Russian culture.

“I don’t like adrenaline, and I’m not into extreme sports, but the feeling I get when [I am] under this almost-14-ton bell with a massive clapper that’s swinging back and forth … it’s really exhilarating,” said the Boston native, referring to the largest bell in the Lowell set, called “Mother Earth.”

Moulton echoed her sentiments, pointing out that the Lowell House bells are one of a few full sets in the U.S. He said the society offers a truly unique opportunity to be part of a global community of enthusiasts dedicated to cultural preservation and understanding.

“It is really an amazing feeling [to] ascend to the bell tower,” he said. “You get closer to the sky. You get to see the world with a whole new perspective. And that’s something that you can’t really get anywhere else.”