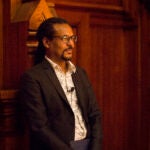 McDermott brings 25 years of experience in sports administration to the appointment, which begins July 1. She has spent significant parts of her career in the Division I Ivy League at Princeton and Columbia, and most recently in Division III at the University of Chicago. Her arrival at Harvard will be a sort of homecoming for the Massachusetts native, who grew up playing basketball in the small town of Westminster, about 20 miles north of Worcester in the central part of the state. McDermott described her new role as one of “enormous opportunity.”

“This role is perfect in every way. I know there will be challenges, the current situation with the pandemic being one of them, but I’m excited to return to athletics at a level I believe in,” she said. “The Ivy League is a model for Division I, and Harvard already has a natural platform to be a model for other institutions. More than ever, we need to have a voice that brings in excellence in every way, and I look forward to having that strong voice.”

“We are thrilled to welcome Erin McDermott to the University,” said President Larry Bacow. “She understands and appreciates the values of the Ivy League — that our athletes are students first. She brings to her new role deep and broad experience as well as an abiding love of competition. I am confident that she will build on the considerable accomplishments of Bob Scalise at a moment of remarkable challenge and change both across the nation and throughout higher education.”

“Erin is someone who has formed a deep appreciation of Harvard and its place in the Ivy League, as well as the things that make the experience we create for our student-athletes unique.”
— Claudine Gay

Gay called McDermott “the leader that Harvard needs for its next century of success in athletics. Steeped in Ivy League principles, fundamentally committed to student-athlete success, and driven by her values, Erin is someone who has formed a deep appreciation of Harvard and its place in the Ivy League, as well as the things that make the experience we create for our student-athletes unique.”

In Chicago, where McDermott has overseen the program as director of athletics and recreation since 2013, Maroon teams captured 17 University Athletic Association championship titles and last year recorded their highest finish (ninth) in the annual Learfield Directors’ Cup rankings. A winner of the 2019 National Association of Collegiate Directors of Athletics AD of the Year award, she also established the Friends of Maroon Athletics, an alumni annual giving society, and served on the Office of the Provost’s Task Force on Sexual Misconduct and the Student Life Leadership Team.

“I envision my first 90 days on a listening tour of constituents, and my goal is to try to build relationships as quickly as I can,” McDermott said. “Credibility and trust happen through consistency in message and being able to show that I believe in this whole ideal. It’s not a they and us; they are us and we are them, and we are all the same.”

A former basketball standout at Hofstra University, McDermott recalled how formative her undergraduate years were playing while studying for an international business degree. McDermott also has a master of science degree in sports management from University of Massachusetts Amherst.

“Athletics gave me so much of who I am and why I feel I can conquer anything,” said McDermott, who has, of late, traded her basketball for a yoga mat. “That’s why this Ivy League model works so well for me. It’s not just about winning the championship; it’s about integrity and honor and competition and, if we’re doing right by the students, and the coaches are true educators, where it’s not continuous pressure, but it’s the release valve, those things can be attained.”

In her 13 years at Princeton, McDermott rose through the ranks from working in compliance to becoming AD Gary Walters’ second-in-command as deputy athletic director. Her tenure was marked with praise for her easy rapport, resolute commitment to integrity, and down-to-earth management style. She often took a direct role in campus leadership, serving on the Provost’s Office of Disabilities Accommodations Review Committee and the President’s Sexual Harassment Hearing Panel.

At Harvard, McDermott takes the reins of an expansive program with a history that dates back 240 years and encompasses the largest varsity program in the country. Included in her purview are 65 clubs and 35 House sports programs as well as an extensive recreation program that engages many members of the Harvard community, including faculty, staff, and students.

“I know what an incredible outlet the rec experience can be for all students. Intramurals and sports clubs are places to build community and to build integration with the larger campus. As much as we can build those connections is not only beneficial to the athletic department, but to campus. This holistic philosophy is and should be something we provide to all students,” she said.

“I am grateful to Dean Gay and President Bacow for entrusting me with this incredible opportunity,” she added. “I look forward to meeting the extensive Crimson community and working together to ensure student-athletes and all students thrive at Harvard in every way that they aspire, consistent with a full and engaging educational experience and in preparation for purposeful and meaningful lives.