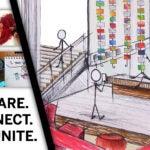 It became almost routine for Salvador Peña to take a break after a few years in a job.

Despite being employed by Maersk, a global shipping company, or even working for the World Bank, Peña never truly felt satisfied.

Looking for something more, he took time off to travel, but it wasn’t exactly a vacation. Peña walked the Camino de Santiago pilgrimage routes winding through Europe, volunteered on a farm scaling date palms to painstakingly harvest their fruit, and meditated in the Israeli desert region of Negev.

“I was very happy with what I was doing,” he said of his time working in national logistic strategies and maritime transport projects for the World Bank. “It’s a great organization and has a noble mission. … Still, my need to serve — that itch that I had — wasn’t being scratched.”

Peña, who is set to graduate in May, has spent the past three years at Harvard Divinity School (HDS) earning his master of divinity degree and seeking out new ways to help others.

Last summer he headed to South America to work with El Arca Argentina, an organization that helps people with intellectual disabilities to flourish. One of his tasks while there was to teach the residents meditation.

During the first session, participants couldn’t meditate for more than a minute and a half before they became jittery and started talking, Peña recalled. By the end of the summer, they were able to sit for 15 minutes nonstop.

“It was transformational,” Peña said of his work at El Arca Argentina. “I didn’t know the impact working with humans has on you. It’s so rewarding, and the love that you get from the community members was something I had never experienced.

“I’ve learned so much about myself. I now know a whole lot more about who I am, what I want, and the people I want to be surrounded by through these three years of self-reflection.”
— Salvador Peña

“Every little action you take, you immediately see the impact you have.”

His work there also shifted the way he views volunteering.

“Volunteerism at El Arca meant you worked with, not for,” he said. “Immediately they tell you you’re a partner, the residents are the boss, and you help when they ask you for help.”

That summer teaching meditation inspired Peña to develop a similar effort at another place he volunteers, Y2Y Harvard Square, a homeless shelter founded and staffed by Harvard students that helps young adults. Last fall he pitched the idea of starting a meditation program there for his capstone project. It was difficult to get interest from the residents, Peña said, but it still had an impact.

“One of the guests who came several times, at our last meeting, he said ‘I feel this changes your brain and I’m happier for it,’” Peña said.

Peña’s desire to serve others was evident even in his student employee position at Harvard. As an assistant at the Graduate School of Arts and Sciences’ Student Affairs Office, he sought to put other students at ease and lower their stress levels while helping them with various policies and requirements. His supervisor recognized his efforts and Peña was one of 24 Harvard students nominated for Harvard Student Employee of the Year in 2019.

Peña has studied leadership and spiritual counseling in his time at HDS, which he said has given him a balance between being academically challenged and spiritually nourished.

“At HDS, I feel that I am surrounded and have experiences with heart-centered people that are also extremely smart,” Peña said. “Every conversation flows from head and heart.

“I’ve learned so much about myself. I now know a whole lot more about who I am, what I want, and the people I want to be surrounded by through these three years of self-reflection.”

Post-graduation, Peña, who is originally from Santo Domingo in the Dominican Republic, is hoping to take a position with one of the large international service organizations he’s had interviews with. Eventually he wants to return to his native Dominican Republic and run for public office. Whatever he ends up doing, he knows he wants to serve people.

“I’ve already accepted the fact that HDS is a closing chapter in my life, but every cell of my being is vibrating with excitement about the unknown future that I’m going to have,” Peña said. “I’m looking so forward to it because that’s what I live for. Being in the field and working with people is what I want.”