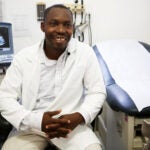 A new mission in Haiti

“I was hired to do substance abuse messaging,” she said after a moment. “Then COVID happened.”

Nelson started work at the consortium — a nonprofit aimed at addressing the health needs of Alaska Native and American Indian people — in late January, after earning a degree in health policy from Harvard T.H. Chan School of Public Health’s M.P.H.-65 program. Now she’s working in the organization’s so-called “situation unit,” a team that helps manage the response to the fast-moving pandemic.

Nelson said that her Harvard Chan School training in risk communication is proving invaluable. “Before coming to Harvard Chan School, I didn’t know there was a science to it,” she said. “But when it comes to COVID, setting up the right dialogue between experts and the community saves lives.”

After majoring in sociology with a minor in public health at the University of Minnesota, Nelson accompanied her husband, a naval submarine officer, to various duty stations, including Kings Bay, Ga. Through the National Health Corps Florida, an AmeriCorps program, she completed a service term at a substance abuse clinic with a caseload of pregnant and postpartum women. She did her best to translate scientific literature into a recovery curriculum, but she wasn’t sure she fully understood what she was reading. “I needed more skills to do right by my clients,” she said. She decided to seek a master’s degree, and chose Harvard Chan School because she was impressed with the School’s rigorous quantitative training and its strong global network.

She struggled through courses such as statistics and decision science, but now says she’s grateful for the training. “The quality of education I got at the School prepared me to participate in very high-level discussions on COVID response,” she said.

A problem that was personal

A high point of Nelson’s Harvard Chan School education was her summer 2019 practicum, which gave her a chance to work on an issue that hit close to home. The practicum came about by accident. In late 2018, Nelson flew home to Alaska for winter break to find the outdoor temperature in the usual subzero range. However, the indoor temperature in her home was unusually and uncomfortably cold. Nelson’s family had stopped heating the house after they received a letter from state officials telling them that, because of poor air quality in the area where they lived — a town called North Pole, near Fairbanks — they were risking a fine of $1,000 for using their woodstove during a four-day “burn ban.” These are bans on using solid fuel-burning devices, such as woodstoves, and they’re issued intermittently each winter in the Fairbanks area depending on air quality forecasts. State officials knew that Nelson’s family had been burning wood during the ban because an air quality official had driven by and taken a picture of their chimney.

Although many homes can also be heated by fuel oil, this option is often much more expensive than using a woodstove, Nelson said.

Distressed that the burn ban would not expire until 2 p.m. on Christmas Eve, Nelson reached out to local community members to learn more. She was aware that air quality was a public health issue, but she also knew that burning wood or coal was how many people in North Pole and the surrounding region heated their homes and businesses.

“Fairbanks is one of the most polluted cities in the nation in terms of fine particulate matter,” she said. “Between the temperature inversion, wood-burning stoves in the winter, and wildfires in the summer, Interior Alaska struggles with air quality year-round.” Nelson wondered if there was a way she could fashion a practicum aimed at bridging the divide between Alaskans accustomed to heating with wood or coal, and state and federal environmental officials who were trying to keep air pollution within federal limits. She wanted to help people in the community understand the serious health impacts of air pollution and to suggest alternative heating methods. But she also wanted government officials to be more thoughtful in how they communicated with people about air quality laws and regulations.

“Fairbanks is one of the most polluted cities in the nation in terms of fine particulate matter. Between the temperature inversion, wood-burning stoves in the winter, and wildfires in the summer, Interior Alaska struggles with air quality year-round.”
— Alicia Nelson, M.P.H. '20

“Alicia is really passionate about building connections and understanding through civil engagement and civil dialogue,” said Nancy Turnbull, senior lecturer on health policy and senior associate dean for professional education, who was Nelson’s adviser. With Turnbull’s encouragement, Nelson applied for and received a Rose Traveling Fellowship to support a practicum in Alaska. Funded by a gift from Deborah Rose, S.M. ’75, the Rose Fellowships supports students and postdoctoral fellows at Harvard Chan School to travel in the U.S. or abroad for internships, research, or other academic projects.

During her practicum, Nelson worked with a team from the Fairbanks North Star Borough’s Division of Air Quality. She learned everything she could about the impact of PM2.5 pollution on health and the local economics of the air quality issue. Over the course of the summer she met with state and federal officials, as well as other stakeholders, such as local electricity suppliers, people from local hospitals and universities, and small business owners. Some of her meetings were so-called “Alaska formal” — very casual — occurring over activities like fly fishing or digging septic lines.

She worked on developing a communications strategy to disseminate information about the local PM2.5 health burden. “I wanted to translate information about air quality in a way that my family could understand,” she said. “Not everyone in North Pole, Alaska, wants to look at the 2,000-page State Air Quality Control Plan.”

“I didn’t change the tide of anything. But I may have convinced some people to think about the ways they heat their homes.”
— Alicia Nelson

She hosted a “public comment” party — “it was sort of like a science fair,” she said — at the North Pole public library to share easy-to-digest information about federal air quality regulations, and to encourage residents to share written comments about them to the EPA. Nelson was thrilled that more than 30 people submitted comments, which prompted coverage in the local paper. “It was possibly the most rewarding day of the entire summer,” she said.

Support from the Rose Fellowship also enabled Nelson to travel to Reykjavik, Iceland, in October 2019 to present her practicum work at the Arctic Circle Assembly, an annual event where representatives from governments, corporations, nonprofits, universities, think tanks, environmental groups, indigenous communities, and others discuss the future of the Arctic. “That’s one of the reasons I went to Harvard — because it provides a platform to connect with people all over the world,” she said.

The Fairbanks-area air quality issue is ongoing. “I didn’t change the tide of anything,” Nelson admits. “But I may have convinced some people to think about the ways they heat their homes. Some of my friends and family filled out applications for the woodstove change-out program, which offers people reimbursements for replacing their woodstoves. My mother-in-law even went with me to look at propane tanks. I consider that a victory!”

Nelson is grateful that she finished her studies at Harvard Chan School before COVID-19 hit in full force, for how well the School prepared her, and for her current role. Recent projects have included compiling a document for tribal health leaders with clinical data on how COVID-19 is impacting Alaska Native patients, as well as a messaging campaign to promote diagnostic and antibody testing.

“It’s extremely rewarding to use my education at home in Alaska,” she said. “I wish COVID wasn’t happening. But I never feel like my training and skill set aren’t useful here. I’m exactly where I should be.”