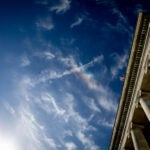 Alberto Alesina, one of the world’s most influential economists who applied economic analysis to thorny social and political problems and helped found the field of modern political economy, died Saturday at age 63 of an apparent heart attack while hiking with his wife, Susan. He taught at Harvard for more than three decades.

Alesina, Ph.D. ’86, was the Nathaniel Ropes Professor of Political Economy and a member of the National Bureau of Economic Research (NBER). Alesina had directed the bureau’s Political Economic Program since its creation in 2006. According to Dani Rodrik, Ford Foundation Professor of International Political Economy at the Kennedy School of Government, Alesina almost single-handedly established the interdisciplinary field, which has become a vital tool in public policy across a range of issues.

Trained as a macroeconomist, Alesina believed in expanding the frontiers of economics into the spheres of political science and sociology. He was a trailblazer in the use of economic tools to understand fundamental questions about the organization and behavior of various cultures and societies, such as how political instability affects economic growth or why Americans are less willing than Europeans to consider ways to promote redistribution of wealth.

Because of the wide-ranging impact of his work, Alesina was for years considered a likely and worthy contender for the Nobel Prize in Economics, said Ed Glaeser, the Fred and Eleanor Glimp Professor of Economics. His work on how ethnic fragmentation harms economic performance predicted the recent backlash against immigration in the U.S. and Europe; and his studies about the optimal size of nation-states had a large influence on debates around the European Union. A paper co-authored in 1993 by Alesina and Harvard President Emeritus and Charles W. Eliot University Professor Lawrence Summers, then a U.S. Treasury official, showed that independent central banks can best control inflation, which played a role in the movement toward central bank independence.

“The hallmark of Alberto Alesina is that he asked extraordinarily interesting questions about just about everything, and he came up with really interesting answers and opened up whole fields.”
— Jeffry Frieden

“Alberto’s reach was boundless,” said Stefanie Stantcheva, professor of economics and a close collaborator of Alesina, in an email to the Gazette. “Taking a genuinely interdisciplinary approach that combined economics with political science, sociology, history, and even cultural anthropology, he transformed economics for the better.”

In recent years, Stantcheva and Alesina had examined the sizable differences between people’s perceptions and reality, a timely topic in this age of polarization. One paper showed that pervasive misperceptions about immigration undermine support for redistributive programs. Another found that Americans are polarized not only over policy, but even in their perception of verifiable reality. The authors also showed that Americans are overly optimistic about the possibility of achieving the American dream of upward mobility while Europeans are overly pessimistic about their prospects for rising.

Widely regarded as one of the most creative economists of his time, Alesina was known for having a knack for finding important questions that nobody had asked before, and for coming up with big ideas that influenced generations of researchers.

As a scholar, Alesina was a force of nature, said Jeffry Frieden, professor of government. The questions Alesina raised, he said, were driven by an endless curiosity and vast energy, whether it was why there is so often divided government in the U.S. or how the plow changed the role of women in society.

“The hallmark of Alberto Alesina is that he asked extraordinarily interesting questions about just about everything, and he came up with really interesting answers and opened up whole fields,” said Frieden in a phone interview. “He worked on economic policy, and that is a continuing field within political economy. He studied political economy and culture, and there is now an NBER group that studies political economy and culture. Virtually every set of topics that he got interested in, he created or contributed to the creation of an ongoing strand of research that carries on.”

The Italian-born economist was not afraid of controversy. Alesina earned some criticism when he became a proponent of fiscal austerity during the Great Recession of 2008‒2009. On May 19, the Manhattan Institute, a free-market think tank, awarded its prestigious Hayek Book Prize to a work he produced with Carlo Favero and Francesco Giavazzi titled “Austerity: When It Works and When It Doesn’t.” That book argued that, in some cases, spending cuts to reduce budget deficits are less harmful than tax increases.The news of Alesina’s death led to an outpouring of tributes from friends, colleagues, and former students who spoke of his warm personality, self-deprecating humor, generosity, and of the many ways he inspired them. Glaeser wrote of how “his wisdom and warmth could light any seminar room, and even bring life to a faculty meeting.”

Stantcheva, recalling Alesina’s wit, said that he was not “just one of the world’s finest economists, but he was among the funniest ones.” Frieden said he was going to miss his laugh and joking around with him. “We kidded each other pretty mercilessly, he for my love of baseball, me for his inability to appreciate the greatest of all games,” Frieden said.

He was not “just one of the world’s finest economists, but he was among the funniest ones.”
— Stefanie Stantcheva

In a piece published Sunday in The Washington Post, Summers wrote of his friendship with Alesina and the mark he left as a scholar. The two met when Alesina was a graduate student at Harvard in the 1980s.

At Harvard, Alesina taught classes on the role of culture in economics and the many areas of political economy, including theories of economic reform, privatization, and elections.

Alesina’s role as a mentor to students was well-known, said Jeremy Stein, chair of the Economics Department and the Moise Y. Safra Professor of Economics. “When he would poke his head in my door to chat, it was often to check in about a student we had in common, to make sure they were doing OK not only in their work, but on a personal level,” said Stein.

Alesina was chair of the Economics Department from 2003‒2006. He was a member of the Center for Economic Policy Research, the Econometric Society, and of the American Academy of Arts and Sciences. He served as an editor of the Quarterly Journal of Economics.

A prolific writer, he published 142 articles in academic journals, often in collaboration with other economists and doctoral students. He remained connected to his beloved Italy through his alma mater, Bocconi University, and the columns he published in the Italian newspaper Corriere della Sera.

“He was devoted to his students, going out of his way to help their careers, but you could just as easily walk into his office cold for the first time …”
— Dani Rodrik

But as much as he loved his work, Alesina’s passion for life was legendary. He loved hiking, skiing, the opera, and the Rolling Stones. Students often found a sign hanging on his door that said, “Why work when you can ski?”

Alesina’s legacy will be felt in the field of political economy, but the memory of his gentle spirit and warm soul will be treasured by his friends, students, and colleagues. In an email, Rodrik said Alesina’s playful mind, contagious laugh, and unassuming personality stood out, as did his warmth and affection for others.

“He was also one of the friendliest, most open personalities in the economics world,” said Rodrik. “He was devoted to his students, going out of his way to help their careers, but you could just as easily walk into his office cold for the first time, and you would encounter someone who was interested in what you had to say, would follow up with questions, and would crack a joke or two before you left. What made him a great friend as well as a scholar was that the childish wonder he had for the world and how it worked (or didn’t) never left him.”