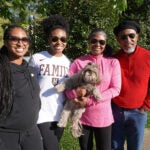 Rewan Abdelwahab’s time at Harvard has included a lot of time away from it, too

Some of the most defining moments of Rewan Abdelwahab’s time at Harvard happened thousands of miles away.

There was the trip to Santiago, Chile, as a first-year student. In Santiago, she was immersed in the Spanish language and learned about health care and education in the country, often working with students from local schools. There was her trip to Mecca and Medina in Saudi Arabia as a sophomore, learning about Islamic history and culture. The summer before her junior year, she was in Istanbul and Alexandria, Egypt, for public health internships. In Alexandria, where Abdelwahab was born, she worked at a local health clinic and helped set up electronic medical records for doctors. This January, she visited three Japanese cities as part of a leadership program.

That’s four trips to five countries for the Currier House resident from Minneapolis. Through those trips, Abdelwahab gained an expanded world view, an understanding of other cultures and norms, and she got to share her culture with the people she met.

“Learning about different belief systems is something I very much have carried with me,” said Abdelwahab, an integrative biology concentrator. “I found that all of these different experiences changed my personality a little bit. In Japan, the people were a lot more expressive in different ways, for instance [in how they showed respect]. I’ve carried that on into the way I talk and I interact with people even now.”

“I’m kind of all over the place, but it really highlights that I constantly have this drive to learn more about people that aren’t like me and didn’t have similar upbringings.”
— Rewan Abdelwahab '20

In short, Abdelwahab said, it all has helped define and shape who she is.

“Travel pushed me to learn more about different experiences, which I think can be somewhat seen even in my studies,” she said. “I’m a biology concentrator with a secondary in the humanities [African American studies] and in two different languages [Spanish and Somali]. I’m kind of all over the place, but it really highlights that I constantly have this drive to learn more about people that aren’t like me and didn’t have similar upbringings.”

It’s a trait that’s even played out among the friends she kept.

“I’m very much someone who seeks out dialogue with people who have differing opinions from my own. My inner friend group consists of people that hold very different values than me and I think that was shown to be even more important to me the more I traveled while at Harvard,” Abdelwahab said. “I’m someone who actively seeks out knowledge of communities outside of my own.”

The trips made Abdelwahab more adventurous when she returned to campus. She felt more confident trying out new activities and clubs, and exploring Boston more than she had before.

On campus she was involved with the Harvard Islamic Society, Harvard College Japan Initiative, Harvard Society of Arab Students, Crimson Care Collaborative, Harvard African Student Association, Minority Association of Pre-Medical Students, and Y2Y, a youth homeless shelter in Harvard Square. With the Minority Association of Pre-Medical Students, Abdelwahab worked with other students to get the Harvard chapter of the organization up and running in 2017, often taking on leadership roles. The group works to support underrepresented minority premeds in collaboration with the Student National Medical Association. While in the Boston area, Abdelwahab also worked at a local health clinic in Chelsea.

Abdelwahab has her sights set on the medical field and the public health sector after graduation.

“My current interests lie at the intersection of medicine and public policy,” Abdelwahab said. “Medicine is really valuable because you can get that one-on-one patient interaction and really influence their health habits and quality of life and learn from your patients in the medical setting, whereas supplementing that with more public-policy approaches would allow for change on the larger, more systematic level that would improve healthcare outcomes.”

Abdelwahab is off to the Mayo Clinic Alix School of Medicine in Rochester, Minn., next year. She is excited to take with her all the experiences she had on campus — and the many lessons she learned off it.