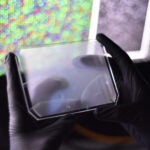 Back in the Cretaceous period, 145 to 66 million years ago, dinosaurs dominated the land and sky. They also, a new paper argues, terrorized the aquatic realm. Recent fossil evidence has revealed that Spinosaurus aegyptiacus, among the largest of all known carnivorous dinosaurs, was a creature of the water, with a center of gravity and a giant tail fin perfect for swimming. The same paper shares robotic modeling by two Harvard scientists that shows how that large, flexible tail fin — unique among dinosaurs — would have given the giant predator a deadly propulsive thrust in the water, similar to a salamander or crocodile tail.

Pierce said the new fossils were necessary to make their argument, as much of the fossil evidence of Spinosaurus, unearthed by German paleontologist Ernst Stromer, had been destroyed in World War II. University of Detroit paleontologist Nizar Ibrahim, the Nature paper’s lead author, had located more traces of the dinosaur in Morocco in 2014, and in 2018 he went back, successfully excavating extensive Spinosaurus remains. The fossils included tail vertebrae with meter-long spines that seemed to form an expanded paddle, raising questions as to what the tail was used for.

“The working hypothesis was that Spinosaurus used its tail to swim through water,” said Pierce, Thomas D. Cabot Associate Professor of Organismic and Evolutionary Biology. Ibrahim and his team reached out to Pierce, curator of vertebrate paleontology at the Museum of Comparative Zoology, to test their idea. She was immediately intrigued by the 5-plus-meter-long tail.

Several features stood out, she said, citing the “fin-like structure” that is not found in any other dinosaur.

“It’s got this unusual morphology where, when you go down the tail, the vertebrae stop interconnecting with one another and the spines get longer and longer, forming a tail with great surface area,” said Pierce. The implication is that they were connected by muscle or some other soft tissue. “And so they were much more free to bend.”

Pierce brought in Lauder, a fish bio-mechanist, and they set about modeling the tail, complete with the top fin that would cover those meter-long bone spines. “We cut some very simple plastic models of different tails so we can attach these to the robotic controller we have back in the lab,” Lauder said. “By moving it back and forth, we can make it ‘swim,’ and we can quantify then the difference in swimming performance between the Spinosaurus tail shape and the tails of other dinosaurs.”

For comparison, they also modeled the tails of a crocodile, a salamander, and the presumably stiffer, thinner tails of two definitively land-based dinosaurs. What they found confirmed their suspicions about Spinosaurus’ appendage, that the flat and very flexible tail was made for swimming. “The crocodile is basically the same design,” said Lauder.

Although fanciful film depictions of Spinosaurus, like that in “Jurassic Park 3,”envisioned the dinosaur as a land-based super-predator attacking a Tyrannosaurus rex, this wasn’t the first time paleontologists had opined that Spinosaurus might be aquatic. But early on, there had been pushback to this idea. “People thought that they had over-interpreted” the data, said Pierce. “Others performed mathematical experiments to show that if you put Spinosaurus in the water, it wouldn’t float.”

With evidence of this new tail fossil, the argument over whether Spinosaurus was aquatic is over. “The fin is not conjecture,” said Pierce. In addition, she pointed out, the dinosaur had a center of gravity that would likely tip it forward if it were on land, a dynamic that fits with its short hind legs. (It would also have made a battle with a T. rex impossible.)

Additional evidence also supports the view that Spinosaurus was aquatic: These new fossils were found in freshwater sediment and with other animals, including coelacanths, large fish that have existed since the days of dinosaurs. “That put an end to the debate,” said Pierce. “I think we’ve got the evidence now to show that this animal was a highly adapted aquatic predator.”

Questions remain, such as how fast could Spinosaurus swim? “It’s huge, so it’s not zipping through the water,” said Lauder. The new-found fossilized remains are of a small Spinosaurus, but that’s still about 10 meters long. “Probably about half a tail length a second at slow, steady swimming,” said Lauder, which Pierce clarified to “about two-and-a-half meters a second.”

However, Lauder noted that crocodiles are capable of great bursts of speed. Too little is known about how Spinosaurus hunted to know if that tail let them move the same way as the crocodile, or how they hunted. Only one conclusion is clear. “When you’re that big,” said Lauder, “you’re probably eating big things, even in the water.”